Long-run historical data for advanced economies provide evidence to help policymakers understand specific conditions that typically lead up to financial crises. Recent research finds that rapid growth in the top income share and prolonged low labor productivity growth are robust predictors of crises. Moreover, if crises are preceded by these developments, then the subsequent recoveries are slower. This recent empirical evidence suggests that financial crises are not simply random events but are typically preceded by a prolonged buildup of macrofinancial imbalances.

Leading up to the Great Recession, the U.S. economy experienced a massive expansion of credit, which likely contributed to an unusual buildup of financial instability. However, a range of other macroeconomic developments occurred at the same time as the credit boom. Two notable macroeconomic forces before the onset of the crisis were a rapid rise in top income inequality, as measured by the share of income that goes to the top 10% of the income distribution, and a collapse of economy-wide indicators of productivity growth. Both of these pre-crisis trends may have contributed to the buildup of financial fragility that led to the crisis, and may help explain the slow recovery that followed.

Do these U.S. patterns reflect a more general phenomenon that tends to develop as precursors to financial crises in various countries? In this Economic Letter we assess the effectiveness of changes in top income inequality and productivity growth as indicators for not only the likelihood but also the severity of financial crises in advanced economies, based on research in Paul (2020).

Historical patterns of inequality and productivity around financial crises

The blue lines in Figure 1 depict the annual percentage point change in top income inequality and labor productivity for the years before and after the start of the financial crisis in 2007, which is denoted by year zero. Panel A shows that top income inequality—measured as the share of income that goes to people in the top 10% of the income distribution—increased quickly in the years before the crisis. These medium-run changes are part of a longer-run rise in top income inequality that started around the early 1980s, which has garnered widespread attention in recent years; see, for example, Piketty, Saez, and Zucman (2018). The blue line in panel B shows that the annual growth rate of labor productivity, measured as the ratio of GDP to total hours worked, began to decline several years before the start of the Great Recession and dropped more dramatically around the outbreak of the crisis. 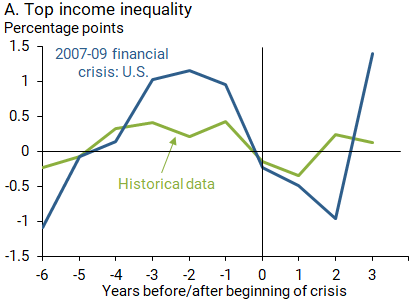 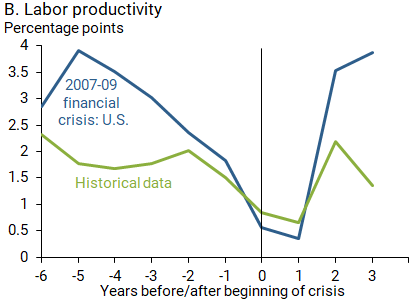 Because financial crises are infrequent events that occur around every 25 years in advanced economies, a long-run historical approach is helpful for examining the conditions that lead up to such events. To that end, this study combines three data sets: the macrofinancial data collected by Jordà, Schularick, and Taylor (2017), productivity data by Bergeaud, Cette, and Lecat (2016), and top income inequality data from the World Inequality Database. As described in Paul (2020), we additionally clean the income inequality data by taking out capital gains from asset sales to remove asset price swings around crises; this helps reflect a mechanism related to income inequality, similar to the one explained in more detail below, as opposed to movements in asset prices. The merged data set covers 17 advanced economies starting as early as 1870 and ending in 2013.

Based on the combined historical data, the green lines in Figure 1 show the typical behavior of the top 10% income share and labor productivity around financial crises. The patterns turn out to be quite similar to those for the U.S. economy before the Great Recession. The top income shares increase in the years leading up to a crisis and collapse once a financial crisis breaks out. In contrast, the measures of annual productivity growth slow down during the lead-in phase and decline decisively around the outbreak of a crisis.

While Figure 1 shows us the typical behavior of top income inequality and productivity growth around financial crises, it does not tell us whether the described patterns actually contain enough information to predict financial crises. As in Paul (2020), we use various statistical prediction models to test whether that is the case. In particular, the empirical models analyze whether changes in top income inequality or productivity growth over several years can predict a financial crisis for the upcoming year.

The analysis suggests that such developments are indeed statistically strong early-warning indicators of financial crises. These results hold true even after accounting for changes in other macrofinancial conditions and regardless of various modifications of the baseline statistical model. Hence, this historical evidence tells us that financial crises typically occur out of environments of rising income inequality and low productivity growth.

In addition, such developments may be informative not only about the likelihood of financial crises but also about their severity once they break out. Figure 2 shows some supportive evidence. The solid lines in both panels portray the typical percentage change of GDP after a recession. The dashed line in panel A shows how this path differs when the previous boom period is also characterized by strong increases in top income inequality. Similarly, the dashed line in panel B portrays the results when previous boom periods are associated with unusually low productivity growth. The two dashed lines illustrate that, on average, recessions that are preceded by either large increases in top income shares or low productivity growth are associated with more severe and persistent declines in output. Thus, the results suggest that changes in top income inequality and productivity growth are not only informative about the likelihood of financial crises but also about the severity of the following recession. 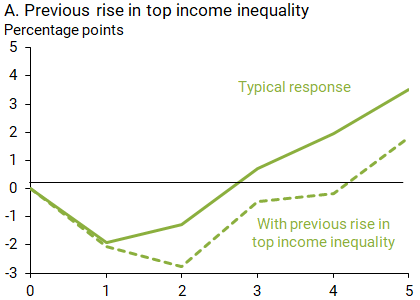 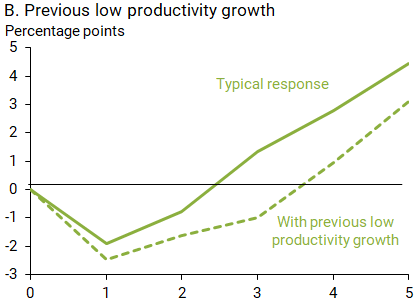 These common historical patterns across a range of crises suggest that financial crises are not entirely random events. By contrast, they are typically preceded by a buildup of macrofinancial imbalances and are predictable, to a certain extent. The findings may therefore equip policymakers with additional early-warning indicators beyond the standard credit and asset price measures that are typically considered when assessing the risk of a financial crisis.

In addition, findings from long-run historical data can guide the design of future macroeconomic models of financial crises by providing the relevant empirical conditions that such models need to replicate, as discussed in Paul (2019). For example, Kumhof, Rancière, and Winant (2015) spell out a theoretical mechanism that explains how an increase in income inequality can lead to a financial crisis. Following a rise in income inequality, richer households may lend their unused income to poorer households, who in turn use the additional borrowing to finance their consumption and living standards. However, the increase in credit and the potentially lower income of poorer individuals may raise the likelihood of default on those loans and eventually increase the risk of a crisis.

The significant drop in productivity growth around the start of a crisis is already reflected in the vast majority of existing macro-finance models: they generally treat this as a temporary external shock to the productive capacity of businesses. Typically, a negative shock of this type increases financial instability. However, the findings in Paul (2020) additionally show that prolonged years of low productivity growth may put economies in an even more fragile position. This more gradual buildup of risk—as opposed to a sudden shock—is less common in conventional business cycle models. The findings therefore present a challenge by pointing out the need for current macro-finance models to account for the influence of lower frequency fluctuations on financial instability.

Rising top income inequality and low productivity growth are important predictors of both the onset and severity of financial crises. These and other empirical findings indicate that financial crises are not simply random events but are preceded by a prolonged buildup of macrofinancial imbalances. The results point to additional early-warning indicators for crises beyond the credit and asset price measures that policymakers typically consider when evaluating systemic risk. The findings also provide guidance for assessing macroeconomic models that include financial crises that researchers can use for policy analysis.

Joseph H. Pedtke is a PhD student in economics at the University of Minnesota and a former research associate in the Economic Research Department of the Federal Reserve Bank of San Francisco.