How Do Low and Negative Interest Rates Affect Banks?

Developed countries have recently turned to very low—even negative—interest rates to try to stimulate their economies. Low or negative rates can affect banks in novel ways because they often base their retail rates on the policy rate. In particular, the rate banks pay households for deposits usually remains at zero during times of low or negative policy rates, rather than falling together with the policy rate, as it would during normal times. This can decrease banks’ net interest margins, negatively impacting their profitability, equity, and ability to lend.

Monetary policymakers in developed countries have turned to low or negative interest rates to counter the severity of the economic slowdowns that accompanied both the Great Recession and the COVID-19 pandemic. However, rates that are very close to or below zero present challenges for the banking sector: banks generally cannot lower their retail deposit rates below zero to follow the central bank policy rate. This reflects the fact that banks are constrained by the willingness of depositors to maintain funds with them given the small cost of keeping cash at home. The resulting difference between the policy interest rate and retail deposit interest rates erodes bank profitability.

We then discuss empirical evidence from banks in advanced economies between 1990 and 2017 that supports the main messages of the conceptual framework. In particular, we find that there is a threshold below which cuts in the policy rate stop affecting bank deposit interest rates and start having a sharp effect on bank profitability, while maintaining a normal effect on bank lending interest rates.

A framework of low and negative rates in banking

We base our framework on the static model proposed in Ulate (2021). In this framework, banks have some equity, take deposits, give loans, and have the option of maintaining reserves that earn the policy rate at the central bank. These banks have some monopoly power, which gives them some control over their own loan and deposit rates. Banks exercise this control over their rates by limiting the amount of loans they give and deposits they accept, which gives rise to the possibility of excess reserves.

We assume that, if a bank were to set a negative deposit interest rate, it would lose all of its depositors, since they would prefer to keep cash. In this framework, banks behave differently depending on the level of the central bank’s policy rate, depicted as the blue line in Figure 1. The economy will be in “normal” territory when the policy rate is above a certain positive threshold, represented by the gold dashed line. A second negative threshold (gray dashed line) marks the beginning of “disintermediation” territory, which means that banks stop offering some services, like taking deposits, to avoid losing profitability. The area between the two thresholds is the territory of low or negative interest rates.

Figure 1
Deposit and loan rates relative to the policy rate 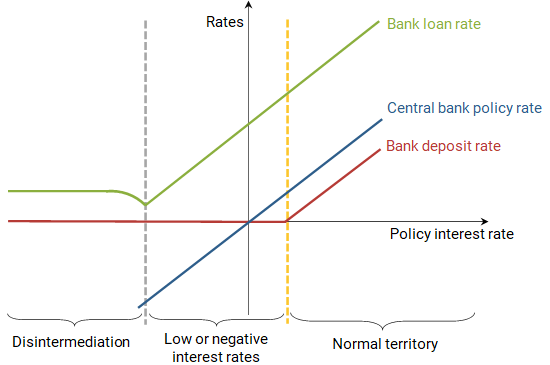 Note: Disintermediation refers to the region where the policy rate is so low that some banks stop accepting deposits.

At times when the policy rate is between the two thresholds, all banks set their deposit rates to zero, according to this framework. The behavior of the loan rate is the same as in normal territory because banks still hold reserves at the central bank. Intuitively, between the two thresholds, banks prefer to receive deposits—even if they earn a low or negative spread—because it allows them to maintain their leverage and earn more through their ability to issue more loans.

When the policy rate falls below the disintermediation threshold, some banks stop receiving deposits and engage in less lending. When the policy rate is exceptionally low, offering deposits at a zero rate becomes so costly that banks may have an incentive to stop accepting them. In this region, the aggregate interest rate banks charge on loans can actually increase when the policy rate falls. Intuitively, a decline in the policy rate creates a disincentive to receive deposits, since some reserves would be kept at the central bank earning a negative rate. This decreases the fraction of banks that take deposits, allowing all banks to increase their loan interest rates. Given the assumptions of the current framework, the second threshold is strictly less than zero, which means that there is some room for policy rates to fall into negative territory without raising immediate fears of disintermediation. 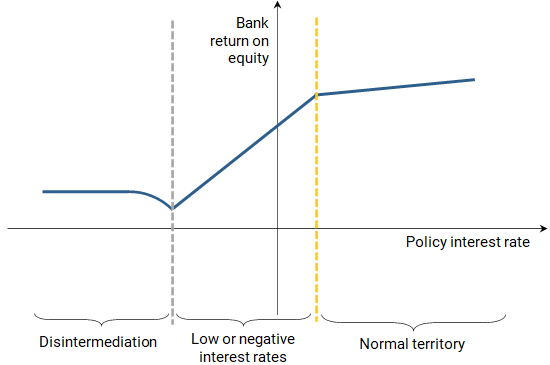 Note: Disintermediation refers to the region where the policy rate is so low that some banks stop accepting deposits.

Ulate (2021) uses data for 1990–2017 from 5,405 banks in 19 countries located across 10 advanced regions: the euro area, Denmark, Sweden, Switzerland, Japan, the United States, the United Kingdom, Canada, Australia, and Norway. The objective is to test if the relationships between the policy rate and the loan interest rate, the deposit interest rate, and ROE look like those depicted in Figures 1 and 2, and if the thresholds exist. Since all 10 regions implemented near-zero rates at different times over the sample period, this provides some variation that can be used to identify the effects of low and negative rates while accounting for the state of the global business cycle.

The study uses several independent approaches to test whether the first threshold defining the beginning of normal territory exists. All of the approaches identify such a threshold, located around 0.5%. In contrast, the second threshold associated with disintermediation cannot be identified from the data. This means that it is unlikely that any country has reached the point where lowering the policy rate starts to raise loan interest rates and leads banks to stop accepting deposits. The theoretical model in Ulate (2021) suggests the lower threshold might be around –2% for advanced economies. By contrast, the lowest policy rate ever implemented in any country is –0.75%.

Other potential effects on banks

The framework presented in this Letter does not deal with the potential capital gains that banks can accrue in times of low or negative policy rates. These gains can stem from the maturity mismatch that exists in most banks: when liabilities have short duration and assets have long duration, a cut in the policy rate can decrease interest expense without decreasing interest income, benefiting banks. Capital gains can also originate from long-lived securities that increase in value after a cut in the policy rate. Research analyzing bank capital gains from maturity transformation includes theoretical studies by Brunnermeier and Koby (2018) and Wang (2020) and empirical studies such as Lopez, Rose, and Spiegel (2020).

While banks could mitigate some of the impact of low or negative rates by charging higher fees, the extent to which this has actually happened is unclear. For example, Basten and Mariathasan (2018) found that certain banks have raised fees more since negative policy rates were implemented, while Heider, Saidi, and Schepens (2019) found that banks are not “undoing” the negative shock to their net worth by charging higher fees.

The framework in our study deals with the effects of near-zero rates on banks in a setting that, for simplicity, keeps all other sectors of the economy fixed. However, such low rates are likely to impact other sectors in the economy, which in turn affects banks. These feedback effects are an important part of the picture. For example, if low or negative rates stimulate the economy, businesses can demand more loans, which can benefit banks (see Ulate 2021 and Brunnermeier and Koby 2018). Additionally, the detrimental effects of near-zero rates on banks can compound the longer they remain in place (see, among others, Lopez et al. 2020). When policy rates remain low for prolonged periods, banks could stop accruing capital gains and be more negatively affected.

Cuts in the monetary policy rate in low and negative territory can have different effects on banks than when the policy rate starts in normal territory. This is mainly due to the inability of banks to drop their retail deposit rates below zero in line with policy rate changes. Central banks around the world must then be careful when setting negative rates, balancing their support for the overall economy with the potential negative impact on bank profits, which could reduce the lending needed to support economic growth. Nonetheless, the analysis in Ulate (2021) suggests that there may be latitude for advanced economies to lower rates below zero during a recession without substantial adverse impacts on bank lending activity. A better understanding of the effects of low or negative interest rates will be essential for economists and policymakers in the current environment of persistently low global interest rates.

Mauricio Ulate is a senior economist in the Economic Research Department of the Federal Reserve Bank of San Francisco.

Olivia Lofton is a research associate in the Economic Research Department of the Federal Reserve Bank of San Francisco.