Initial disruptions to business activity stemming from the outbreak and spread of COVID-19 resulted in widespread job losses and pay cuts for numerous U.S. workers (Parker, Horowitz, and Brown 2020). Reduced employment income caused an immediate slowdown in people’s spending. In the midst of the crisis, Congress passed the Coronavirus Aid, Relief, and Economic Security (CARES) Act in March 2020. A key goal of the Act was to provide economic relief directly to households, primarily through two parallel programs: onetime cash transfers, known as Economic Impact Payments (EIP), and additional weekly unemployment insurance (UI) benefit payments to supplement states’ standard UI programs. While the relief package provided much-needed economic support (Cooney and Shaefer 2021), the extent to which it helped bolster households’ ability to consume has been unclear.

In this Economic Letter, we assess how much the CARES Act allowed households to sustain their typical consumption in the face of lost employment income. Specifically, we examine the concept of “resilience,” defined as the number of weeks a household whose employment income falls to zero can maintain its typical rate of consumption using only nonemployment income and liquid assets. Measuring resilience in terms of weeks of consumption normalizes the support provided by the CARES Act relative to each household’s typical consumption level. Resilience therefore provides a better measure of how well households can sustain their standard of living than simpler measures such as total dollars of aid.

We break down the impact of the legislation on resilience between the two major programs, as well as by how the aid impacted income and demographic groups differently. Our analysis suggests that the CARES Act boosted median household resilience by 15 weeks. We find that the enhanced UI benefits component was the chief driver behind the equalizing effect of the CARES Act on resilience across different income levels. The impact also differed across racial demographic groups, having the largest impact for Black and Hispanic households. Specifically, the CARES Act increased resilience by 19 weeks for Black and Hispanic households, chiefly due to enhanced UI benefits.

The public health policy response to the COVID-19 outbreak caused large swaths of the economy to shut down to limit the spread of the virus. Numerous individuals lost their jobs, and hence their employment income, prompting quick federal action through the CARES Act. To understand the impact of assistance from the CARES Act, we gauge household resilience during this crisis. Specifically, we consider how well a household could maintain its typical consumption patterns if no employment income or external credit were available.

Our main source of data is the Census Bureau’s Survey of Income and Program Participation (SIPP). SIPP collects detailed data on income sources and assets at the person and household level. We construct a sample of 10,613 heads of household and their spouses. For each household in our sample, we sum their after-tax nonemployment income—for example, from dividends, interest, rental properties, and state-provided UI benefits—and accumulated liquid assets—for example, stocks, Treasury bills, and cash holdings at banks. These resources approximate what households would have on hand to easily fund consumption if their employment income fell to zero. Approximately 80% of our sample had nonemployment income, including estimated state UI payments, prior to the CARES Act. Only 2% of households in our sample reported having no cash or other liquid assets.

Not every person who lost a job as a result of the pandemic was eligible for CARES Act payments. We address this eligibility constraint in two stages, in line with Bhutta et al. (2020). First, we rely on household income and composition data to determine eligibility for EIP transfers and estimate the amount of money each household received. Transfers were delivered in multiples of $1,200 per adult and $500 per child in the household and gradually phased out above certain income thresholds based on tax-filing status. For example, married couples filing joint returns and with no children were not eligible for EIP transfers if they had a combined annual income of $198,000.

Second, we determine if each individual in our sample would have qualified for UI benefits if their source of employment income had suddenly dried up. Data on individuals’ employment and earnings histories allow us to make these inferences. In conjunction with state-specific unemployment benefit calculation formulas (Department of Labor 2019), these data allow us to also estimate the benefit amount each eligible individual and household would have received weekly. To be clear, this estimation includes both state UI payments and expanded benefits through the CARES Act. For example, an eligible one-person household in Mississippi could have received up to $235 weekly for up to 26 weeks in base UI benefits excluding additional allowances granted by the state before receiving the additional $600 a week for up to 16 weeks provided through the CARES Act. This 16-week interval represents the period from mid-April through July 2020 when the enhanced CARES Act UI benefits were active. In the analysis that follows, our pre-CARES Act scenario includes estimated state UI benefits but excludes the enhanced CARES Act benefits.

The CARES Act and household resilience

In the pre-CARES Act scenario, our analysis shows that the sample’s median household resilience is 31 weeks. We then take into account the additional nonemployment income provided by the CARES Act. Our measure suggests that the CARES Act boosted households’ ability to sustain their typical consumption expenditures in the absence of employment income: the median household’s resilience rises by 15 weeks to 46 weeks. These results are broadly in line with Bhutta et al. (2020), who show that transfers from the CARES Act allowed nearly half of all working families to maintain their spending for up to an additional six months. 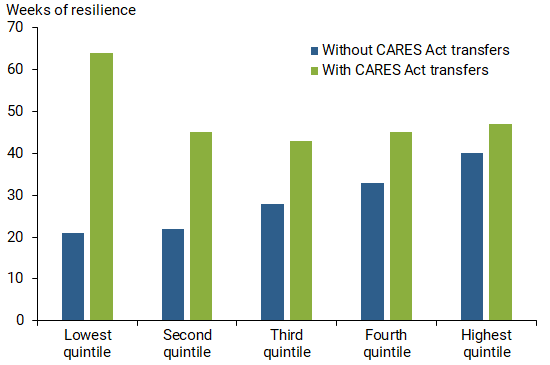 We also look separately at the two components of federal CARES Act assistance, shown in Figure 2. We find that the UI component boosted household resilience to a more significant degree than EIP transfers, reflecting the bigger overall size of the former compared with the latter. For example, enhanced UI benefits were responsible for about 85% of the change in the resilience measure for lower-income households, at the median. For the highest income quintile, EIP did not contribute to any change in resilience at the median, primarily because the payments phased out at higher income levels. 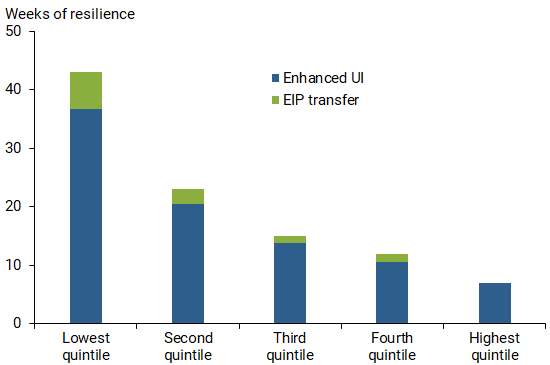 Using similarly calculated shares for each income quintile, we find that the enhanced UI benefits component was the chief driver behind the CARES Act’s equalizing effect on resilience across income quintiles.

A closer look at the racial breakdown of heads of households and their spouses yields additional insights, shown in Figure 3. Before accounting for CARES Act transfers, households led by Black or Hispanic individuals were able to support their typical spending for 25 and 26 weeks, respectively. This translates to about 8 weeks less resilience than for white-led households and about 12 weeks less than for Asian-led households. 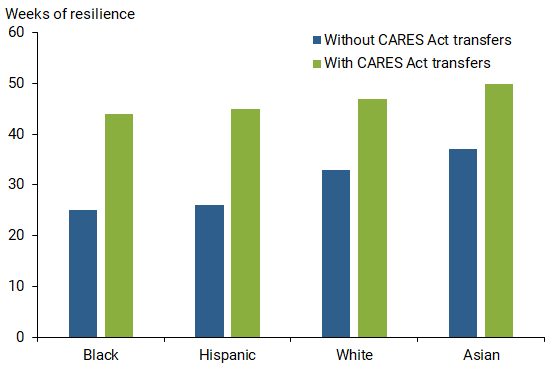 When CARES Act transfers are accounted for, the resilience of households led by Black or Hispanic individuals jumped to 44 and 45 weeks, respectively. This reduces the discrepancy between these households and their white or Asian counterparts to somewhere between 3 and 6 weeks. Our results also suggest that the contribution from enhanced UI benefits to the boost in household resilience is around 85% for households led by Black or Hispanic individuals, and closer to 90% for those led by white or Asian individuals.

Finally, a regional breakdown of our sample reveals that Southern and Midwestern households have about three-quarters of the resilience of their Northeastern counterparts before CARES Act transfers are taken into account. As Figure 4 shows, our results suggest that CARES Act transfers brought household resilience to a more uniform level across the four major U.S. geographic areas as defined by the Census. The median resilience level for all regions was between 45 and 50 weeks. We found little variation in contributions to the change in household resilience from the enhanced UI benefits compared with the EIP transfers across geographic regions. 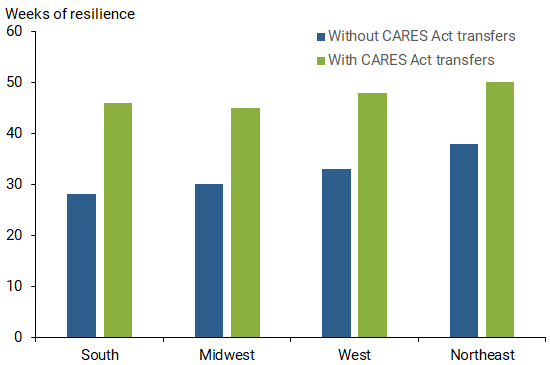 The onset of the COVID-19 pandemic in early 2020 brought with it historic U.S. job losses as the country grappled with containing the virus. In the absence of employment income, the CARES Act boosted nonemployment income to help households stay afloat. We find that the CARES Act increased the median household’s ability to sustain its typical consumption expenditures by about 15 weeks. Also, the Act’s enhanced unemployment insurance benefits supported household resilience to a much greater extent than its Economic Impact Payments.

Our results suggest that the CARES Act transfers boosted lower-income households’ resilience significantly more than that of their higher-income counterparts and helped decrease the discrepancy in resilience across racial groups and geographic regions.

James Aylward is a former senior economic analyst in the Economic Research Department of the Federal Reserve Bank of San Francisco.

Elizabeth Laderman is a former senior outreach economist in the Economic Research Department of the Federal Reserve Bank of San Francisco.

Gladys Teng is a former research associate in the Economic Research Department of the Federal Reserve Bank of San Francisco.