Foreign capital inflows can benefit an emerging market economy (EME) by reducing the cost of financing domestic consumption and investment. However, surges and subsequent reversals of capital inflows can hurt financial and macroeconomic stability in EMEs. Recognizing the potential destabilizing impact of capital flow surges for EMEs, the International Monetary Fund (IMF) has become more amenable in recent years to using capital account restrictions as a “part of the policy toolkit to manage inflows” (Ostry et al. 2010).

This Economic Letter focuses on how capital surges into EMEs as a result of more open capital account policies can also distort the distribution of income in those countries. We present new evidence from 60 EMEs since the 1960s to show that increases in net inflows of private capital raise income inequality substantially. The potential impact on income inequality provides an additional motivation beyond financial stability to support policies that restrict surges in capital flows.

Little research has explored the formal link between capital flows and income inequality. In a recent paper, Liu, Spiegel, and Zhang (2020) present a theoretical framework to study how international investment could affect earnings of different groups of the population in different ways. Their model considers two groups: entrepreneurs, who have access to capital markets—both domestic and foreign—and earn income from investment returns, and workers, who do not have access to investment opportunities and earn income from wages and interest on their savings. Domestic and foreign banks play an important role, providing savings options for households and loans for entrepreneurs to finance capital investments.

Under this framework, Liu et al. (2020) demonstrate that a surge in capital inflows to an EME triggered by a decline in the global interest rate can boost net local profits on capital and skew the income distribution in favor of entrepreneurs. In contrast, households suffer a reduction in interest earnings on their savings in domestic and foreign banks. The effect is symmetric: capital outflow surges are expected to skew the income distribution in favor of households.

This Letter extends the analysis in Liu et al. (2020) and provides new cross-sectional evidence regarding the short-run effects of capital flow surges on income distributions using a sample of 60 developing economies from 2001 to 2018. Our sample excludes countries that serve as offshore financial centers and those with populations of less than 2 million, because the capital flows to those economies are more likely to be reinvested outside the country.

We measure nominal gross private capital inflows by changes in national liabilities from Lane and Milesi-Ferretti (2018), then subtract each country’s government borrowing as reported in the World Debt Tables from the United Nations. We measure nominal gross private outflows by changes in national assets, also obtained from Lane and Milesi-Ferretti (2018), net of changes in total official reserves minus gold, from IMF International Financial Statistics. We then subtract gross outflows from gross inflows to obtain net inflows. We divide these measures of capital flows by nominal GDP for each economy in our sample.

We measure income inequality using a standard gauge known as the Gini coefficient for each country based on household pretax market income, taken from the Standardized World Income Inequality Database. Using after-tax income can produce a different measure of income inequality. However, the effects of redistribution policies in EMEs are not likely to be very large. The Gini coefficient has a value from 0 to 100, with higher values corresponding to higher levels of income inequality. For example, a score of 0 would imply complete income equality across households, while a score of 100 would imply that all income is held by a single household.

The values of the Gini coefficient vary widely in our sample. For example, in 2015, South Africa had the most unequal income distribution, with a Gini of 68.7; and Ukraine had the most equal distribution, with a Gini of 22.4. For comparison, in the same year, Mexico was near the middle of the range, with a Gini value of 46.5. While inequality levels are widely dispersed, movements in inequality within our sample tend to be very modest. Overall, the sample shows a 0.2 percentage point average annual decline in the Gini coefficient, indicating a movement towards greater equality.

Focusing on net private capital inflows, Figure 1 shows how these inflows as a share in GDP on the horizontal axis relate to the year-over-year changes in the Gini coefficient on the vertical axis, each averaged over the sample years from 2001 to 2018. The upward slope of the trend line shows that capital inflows and income inequality have a positive relationship across countries, with a correlation coefficient of about 0.3. This suggests that economies with higher net capital inflows also experienced faster increases in income inequality. 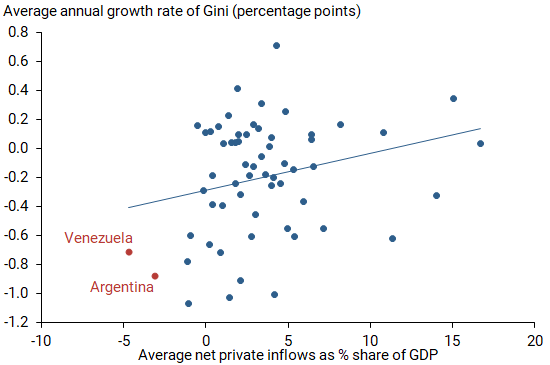 The data include some notable experiences that illustrate this point. For example, Argentina and Venezuela (red dots) reflect the low end of the spectrum: both countries experienced disruptive episodes of large capital outflows as well as net average outflows over our sample period. They also exhibited notable declines in income inequality, with Argentina’s Gini falling from 45.1 to 38.8, while Venezuela’s fell from 44.4 to 40.5. Note that as predicted by theory, the effect is symmetric: countries with large positive net capital inflows show a marked increase in income inequality, while those with large net capital outflows are associated with a decrease in income inequality.

One problem with this simple scatterplot is that it may not capture the true relationship between capital inflows and income inequality because countries can differ in size, capital account policies, or access to international markets. Those country-specific characteristics can also contribute to the observed changes in income inequality.

To more accurately estimate the relation between capital flows and inequality, we need to control for countries’ differences. To do so, we use a regression analysis to estimate the statistical relation between average changes in the Gini coefficient and net private capital inflows, controlling for the effects from such factors as initial levels of real GDP and population, and their growth over our sample period. We also control for the financial remoteness of each economy, measuring their great-circle distance from New York City, the financial center of the United States, which serves as a proxy for the country’s access to international financial markets.

Our estimation results indicate a positive and statistically significant relationship between net capital inflows and income inequality; detailed results are provided in an online appendix. However, because the Gini coefficient does not change frequently, only exceptional inflows or outflow surges—such as those experienced by Argentina and Venezuela in our sample—would be associated with notable movements in income inequality. We have tested the reliability of our estimation results by accounting for a variety of other factors, such as restrictions that countries place on capital flows. The results from these tests—which are reported in the appendix—are consistent with the findings in our baseline specification.

Do surges in capital inflows cause increases in income inequality?

While our cross-sectional study demonstrates a significant relation between capital inflows and income inequality, it does not establish that capital flows cause changes in income inequality. The reverse may be true: foreign investors may respond to changes in a developing country’s economic conditions, including changes in its income distribution.

This Economic Letter presents evidence of a positive and economically meaningful relationship between short-run surges in capital inflows and income inequality in a cross-sectional sample of emerging market economies. Our evidence suggests income inequality may provide an additional rationale for EMEs to resist short-term surges in capital inflows, beyond concerns about financial and economic stability. This consideration may soon become relevant if persistently low global interest rates result in a new round of capital flow surges to developing economies during the recovery from the COVID-19 pandemic.

Mark M. Spiegel is a senior policy advisor in the Economic Research Department of the Federal Reserve Bank of San Francisco