Disagreement among economic forecasters about the outlook for inflation in both the United States and the euro area has increased since the onset of the pandemic. The nature of these forecast differences can provide insights into the inflation risks that lie ahead. Many forecasters initially expected substantially lower inflation over the next year but subsequently raised their expectations as economic activity began to improve. In contrast, changes in expectations and disagreement about longer-term inflation have been relatively subdued and suggest a balanced likelihood between higher and lower inflation.

Consumer price inflation in both the United States and the euro area has declined since the onset of the COVID-19 pandemic in early 2020 as lower economic activity has weakened overall demand, particularly for businesses that are sensitive to the virus. Though U.S. inflation has rebounded somewhat in recent months, inflation in both economies is still running substantially below pre-pandemic levels. In January, U.S. consumer price index inflation rose at a 1.4% rate over the preceding 12 months, while euro-area consumer inflation rose 0.9% over the same period. These figures are well below the long-run inflation targets of the Federal Reserve and European Central Bank. In line with declines in actual inflation, survey measures of expected short-term inflation in the United States and euro area have fallen since the onset of the pandemic. Over the same period, long-term expectations have declined only marginally in both economies.

While discussions of forecasts often use a consensus measure, such average or median forecasts can conceal the degree of possible disagreement among economic forecasters. Disagreement among forecasters about the future path of inflation tends to increase during economic crises, when there is relatively more uncertainty about the size and duration of shocks affecting the economy as well as the effectiveness of policy responses. Leduc, Rudebusch, and Weidner (2009) showed that such disagreement among U.S. forecasters rose during the Great Recession of 2007–09 and varied with the forecast time horizon, with some expecting much lower short-run inflation and some anticipating much higher long-run inflation.

This Economic Letter shows that forecast disagreement also rose during the COVID-19 pandemic-related crisis in both the United States and euro area. However, the nature of this disagreement varies according to the forecast horizon. The range of short-term forecasts across survey participants in both economies widened at the onset of the pandemic, primarily because many forecasters expected substantially lower inflation over the near term. Recent data indicate that fewer forecasters now expect short-term inflation to fall, as expectations for the economy improve. In contrast with the short-term views, dispersion among longer-term inflation forecasts has remained relatively subdued throughout the pandemic. This, along with the rapid recovery of short-term inflation projections, suggests inflation expectations in both economies remain well anchored to policymakers’ long-term goals.

The Federal Reserve Bank of Philadelphia and the European Central Bank (ECB) survey professional forecasters in financial and nonfinancial institutions on the expected inflation rate in the United States and the euro area, respectively. The Philadelphia Fed’s Survey of Professional Forecasters asks participants quarterly (in February, May, August, and November) about their expectations for the U.S. consumer price index (CPI) over the next 4 quarters, 5 years, and 10 years. They use these data to construct projections for 1 year ahead and 6–10 years ahead. The ECB Survey of Professional Forecasters asks participants quarterly (in January, April, July, and October) about their expectations for the Harmonized Index of Consumer Prices in the euro area over different horizons, including one year and five years ahead.

Median measures of inflation expectations summarize the consensus view of the inflation outlook. The relation of median expectations to central bank inflation targets provides an indication of how well expectations are anchored to central bank goals for price stability. However, median estimates mask any underlying differences among individual forecasters about the outlook. The magnitude of these differences can provide insights into possible inflation risks perceived by professional forecasters. Moreover, the nature of the disagreement at various horizons may help policymakers better understand the upside and downside inflation risks to the outlook and manage policy more effectively.

Figure 1 plots median short-term inflation forecasts from both U.S. and euro-area survey respondents through the most recent survey for first quarter of 2021 (solid lines). Also shown are the average of the highest 25% of the forecasts (top quartile) and the average of the lowest 25% of the forecasts (bottom quartile). The gap between the highest and lowest quartile averages—that is, the vertical difference between the top and bottom dashed lines—provides a measure of the dispersion of forecasts. As forecasters’ views change over time, particularly during periods of increased economic turmoil, the gap captures changes in the magnitude of disagreement. 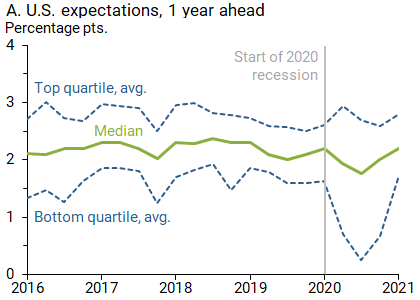 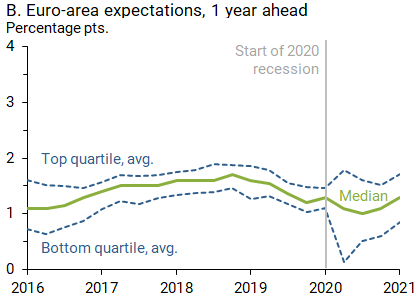 The median one-year-ahead forecast fell in the United States and euro area at the beginning of the pandemic, consistent with the decline in actual inflation, but has nearly returned to pre-pandemic levels more recently. This likely reflects the economic outlook improving after the first half of 2020, associated with the intermittent relaxation of social distancing measures, monetary accommodation and fiscal support, and the anticipated effects of vaccine distribution. Correspondingly, the dispersion in these forecasts increased in the first few quarters after the onset of the pandemic but then narrowed significantly in the first quarter of 2021.

Closer inspection shows that the initial increase in short-run forecast dispersion in both economies primarily comes from a substantial decline in projections in the lowest quartile. That is, those forecasters who are more concerned about low inflation grew substantially more worried at the onset of the pandemic, likely because of expected lower price pressures from weakened economic activity. The wider forecast dispersion reflected more uncertainty about near-term inflation in the early stages of the pandemic, with the balance of risks tilting substantially to the downside.

A similar pattern occurred during the Great Recession. As Leduc et al. (2009) pointed out, in the wake of the Great Recession the dispersion of U.S. short-term inflation forecasts increased, largely driven by much lower short-term inflation estimates from forecasters in the bottom quartile. These changes unwound gradually during the recovery, as the average of the bottom quartile of inflation forecasts rose. 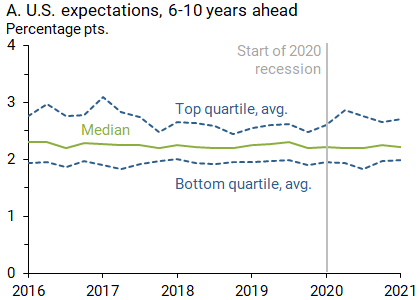 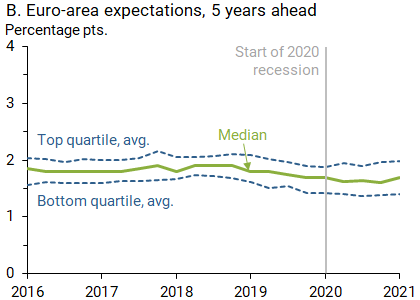 The stability of long-term expected inflation differs from the pattern during the Great Recession, when the dispersion in forecasts 6–10 years ahead rose sharply for an extended period because of sharply higher inflation projections by some forecasters. The rise likely reflected concerns that the Federal Reserve would be compelled to accommodate higher inflation to ease the burden of growing federal budget deficits at the time.

In contrast to the United States, the euro area’s median long-term inflation projection edged down somewhat at the beginning of the pandemic. This followed a steadily declining trend over the preceding several years, which is likely attributable to sluggish European growth after the euro-area sovereign debt crisis intensified around 2013, as well as falling oil prices (Mörhle 2020). The most recent data indicate the median forecast for inflation five years ahead is 1.7%, near historic lows and possibly outside the ECB’s target range of “below, but close to 2%” over the medium term. The evidence regarding whether this indicates that ECB inflation expectations are becoming unanchored is somewhat mixed (Möhrle 2020, Dovern and Kenny 2020). At the long-term horizon, dispersion in euro-area forecasts has widened slightly, with average forecasts rising in the top quartile and falling in the bottom quartile. However, this increased dispersion is much smaller than at the short-term horizon and is consistent with a balanced view of long-run inflation risks in the euro area.

It should be noted that, compared with the euro area, inflation disagreement has been higher in the United States over the entire sample period, at both the short and long-term horizons. This may reflect greater inflation uncertainty in the United States, in part because the Federal Reserve only adopted an explicit inflation target in January 2012 (Grishchenko, Mouabbi, and Renne 2017). However, U.S. dispersion has remained greater even in recent years, suggesting that it may reflect other factors, such as the degree of herding behavior among survey respondents (Andrade and Le Bihan 2013).

Measuring the changes in the gap between high and low forecasts for inflation since the onset of the pandemic can provide insights into risks for the inflation outlook. Dispersion of one-year forecasts across survey participants in both the United States and euro area widened during the pandemic. The main cause was that those forecasters most concerned about low inflation in the near term lowered their expectations substantially with the onset of the pandemic and the decline in actual inflation. This suggests that perceived risks to the short-term inflation outlook were tilted to the downside in both economies during the early stages of the pandemic. Such perceived risks have become more balanced between higher and lower inflation in the most recent round of survey expectations.

Noah Kouchekinia is a research associate in the Economic Research Department of the Federal Reserve Bank of San Francisco.

Möhrle, Sascha. 2020. “New Evidence on the Anchoring of Inflation Expectations in the Euro Area.” IFO Working Paper 337-2020, September. Leibniz Institute for Economic Research at the University of Munich.