Resilience of Community Banks in the Time of COVID-19

Stress tests in December 2020 showed that the largest U.S. banks had strong capital levels and could continue to lend to households and businesses under hypothetical severe recessions. Assessing thousands of small community banks against similar criteria suggests that, while about one-fifth could fall below adequate capitalization, only a handful of those risk becoming insolvent. Overall, this is a reassuring view for small banks and their communities, suggesting that the risk of widespread bank failures leading to financial instability appears to be small.

Concerns about how the COVID-19 shock might affect the resilience of the banking system prompted the Federal Reserve to conduct a second stress test in late 2020 for the 33 largest U.S. banking organizations (Federal Reserve Board 2020). With $100 billion or more in total consolidated assets, these banks together account for about 80% of total assets in the U.S. banking industry. The projections for large banks under the stress scenarios showed that they would be able to stay above the required minimum risk-based capital ratio. However, the stress test does not tell us how the 5,000 small community banks that make up the rest of the banking industry would perform under the same scenarios.

Community banks differ from large banks in several ways. They serve businesses and residents in local banking markets. Their lending tends to be more concentrated on real estate, and their loan portfolios are also less geographically diversified. Most borrowers at community banks do not have access to other sources of financing. Some rural communities have only one bank in town. Because community banks have a high concentration in commercial real estate (CRE) lending, the disproportionate effect of the COVID-19 shock on the CRE sector has raised particular concerns about the resilience of community banks.

History shows that the failure of numerous smaller depository institutions over a short period of time—like the savings and loan crisis and the banking crisis in the 1980s—can disrupt the overall financial system (Robinson 2013). This Economic Letter assesses the adequacy of loan loss reserves and capital for small community banks under stress scenarios and finds that most of them are resilient. The severe stress scenario reveals that about one-fifth of community banks could be undercapitalized, and most of them are in metropolitan areas where banking competition is higher than in rural areas. Nevertheless, to the extent that undercapitalized banks may not be able to readily provide credit to their borrowers, my findings suggest that some pockets of the economy—primarily rural bank-dependent communities—could be disproportionately affected by limited access to credit in such severe situations.

In the aftermath of the Global Financial Crisis, the Federal Reserve established ways to test how well U.S. banks could withstand future economic shocks, known as stress tests. Facing a similarly severe economic impact during the COVID-19 pandemic prompted the Fed to launch a second round of stress tests last year, assessing the resilience of large banks in hypothetical scenarios. These scenarios are characterized by a severe decline in global economic activity accompanied by financial market distress. Under the severely adverse scenario, relative to the third quarter of 2020, the U.S. unemployment rate climbs 3 percentage points to a peak of 12½% in the fourth quarter of 2021; real GDP falls 3¼% to its trough in the fourth quarter of 2021; house prices fall 27% by the third quarter of 2022; CRE prices decline 30% by the fourth quarter of 2022; and the Dow Jones Total Stock Index declines 50% through the second quarter of 2021. In an alternative scenario, the initial drop in global economic activities is less severe relative to the first scenario, but the subsequent recovery is more sluggish.

The use of stress tests illustrates the importance of gauging large banks’ ability to withstand severe economic shocks to ensure both the safety and soundness of the banking system and the uninterrupted flow of credit to borrowers. The results of the December 2020 tests indicated that large banks have sufficient capital and could continue to lend during these hypothetical scenarios.

But how would thousands of small community banks fare in similar situations?

To apply stress testing to community banking, I obtain the balance sheets from regulatory reports as of the third quarter of 2020 for each bank with total assets less than $10 billion. There were 4,847 community banks with aggregate total assets of $3.15 trillion, of which 3,416 banks were located in metropolitan statistical areas (MSA) and 1,431 in rural areas.

I test the capital adequacy of each community bank by marking down its loan portfolio using the supervisory loss rates in the Fed’s December stress test: 2.1% for first-lien mortgages, 3.1% for junior liens and home equity lines of credit, 7.5% for commercial and industrial loans, 12.6% for commercial real estate loans, 22.3% for credit card loans, 6.4% for other consumer loans including auto loans and student loans, and 4.0% for all other loans.

To gauge the effects of hypothetical stress-induced losses on a bank’s capital, I examine each bank’s capacity to absorb those losses. This includes so-called Tier 1 capital—consisting mainly of common equity and retained earnings—and the reserve for loan and lease losses. I assume half of the reserve for loan and lease losses can be released immediately to absorb the stress-induced losses, with the remaining loan losses absorbed by the bank’s capital.

Two caveats apply to this evaluation method. First, while different loss rates for different loan types are applied to each bank, due to data limitations I apply the same loss rate by loan category to all banks, assuming no differences in loan and borrower characteristics across banks. The losses therefore are systematic rather than bank specific. Second, loan losses are recognized immediately rather than spreading out over time, making the stress more acute while denying banks the possibility of making up some of the losses through earnings. This static analysis is therefore more conservative.

In applying the stress tests to community banks, I focus on results from the severely adverse scenario. The results project that total losses for community banks would be $158.3 billion, which translates into a 7.3% loss rate. Figure 1 shows that the CRE portfolio alone accounts for 55% of total losses, while commercial and industrial loan losses make up another 22%; first and junior lien mortgages, 6.4%; credit card and consumer loans, 5.4%; and other loans 11%. The aggregate leverage ratio is projected to fall from the current 10.4% to 6.0%. 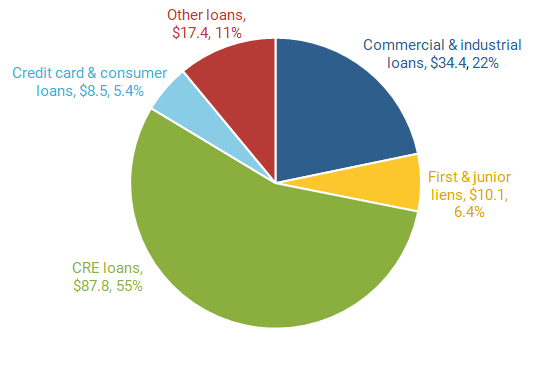 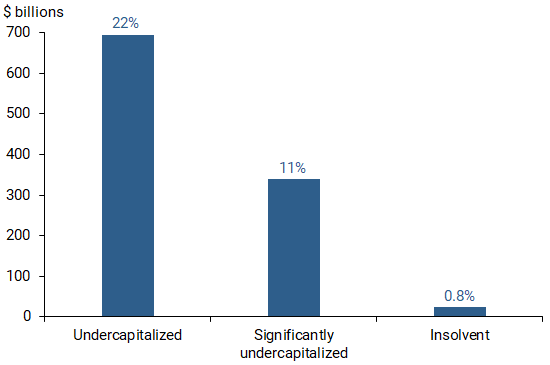 The tests also show that community banks located in metropolitan areas are more likely to be undercapitalized during severe stress than those in rural areas: 24% of community banks in MSAs (with 36% of total community bank assets) are projected to be undercapitalized during the severely adverse scenario, versus 3.9% in rural areas (with 6% of total assets). In fact, of the 902 community banks projected to fall below adequate capitalization under stress, 93% are located in MSAs. This higher metropolitan concentration could ease some concerns about the potential for limiting credit availability to communities because MSAs have more banking establishments and thus higher competition than rural areas. This means that concerns about undercapitalized community banks being less willing or able to meet borrowers’ demand for credit might be confined to a small number of rural communities under the adversely severe stress scenario.

About one-fifth of community banks, holding 34% of community bank assets, are projected to fall below adequate capitalization under a severely adverse scenario. Of those assets, about one-third are held by banks that could become significantly undercapitalized or insolvent in such a scenario. While undercapitalized banks might not be readily able to provide much-needed credit to support bank-dependent borrowers, most of them are located in metropolitan areas where banking competition is higher than rural areas. Overall, even under severe stress, only a handful of community banks are projected to be insolvent. This is a reassuring view for small banks and the communities they serve, suggesting that the risk of widespread bank failures leading to financial instability appears to be small.