Investors are usually willing to pay a higher price, known as a premium, for a safe fixed-income asset in return for the convenience of its high quality and liquidity. A study of Swiss government bonds—widely considered to be extremely safe but not particularly liquid—can give some insights into how quality affects the premium. The large and variable safety premium of these bonds surged to persistently higher levels following the launch of the euro. However, subsequent large asset purchases by the European Central Bank depressed the safety premium.

A safe asset is a debt instrument that is expected to preserve its value even if financial markets become more risky. Such assets typically trade at a price that includes a premium—an extra cost relative to comparable securities denominated in the same currency—because they offer investors two advantages: high liquidity and safety (Krishnamurthy and Vissing-Jorgensen 2012). The portion of the premium tied to liquidity represents what investors are willing to pay for the ability to easily buy and sell the asset. Likewise, the “safety” premium is the value investors attach to the asset’s ability to hold its value even under severely adverse financial market conditions.

Safe assets and their pricing deserve close examination because of their global macroeconomic importance. A shortage of safe assets, resulting from imbalances in global savings between developed and emerging economies, is likely to be an important determinant of low interest rates in many countries (Caballero, Farhi, and Gourinchas 2017). By implication, the lack of safe assets may have contributed to keeping short-term monetary policy rates near their effective lower bounds around the world since the Global Financial Crisis of 2007–09 (Mertens and Williams 2020).

In this Letter, we review recent research by Christensen and Mirkov (2021) examining the safety premium embedded in one of the safest government bonds in the world: Swiss government bonds. Given that these bonds are far less liquid than their U.S. counterparts, the convenience premiums of Swiss government bonds can be almost entirely attributed to their high credit quality. We therefore refer to them as safety premiums and measure them as expected lower earnings relative to otherwise identical assets with the same annual interest and principal payments. Consequently, a positive safety premium results in a higher price in our setup.

Our analysis shows that the Swiss safety premium shifted persistently upwards following the launch of the euro in January 1999. In contrast, the subsequent asset purchase program by the European Central Bank (ECB) reduced the available supply of safe assets in the euro area, which does not include Switzerland. Because Swiss bonds were not among those purchases, our results suggest that they may have become relatively less exclusive in European markets, which limited their ability to command a premium.

We examine safety premiums using Swiss government bond price data, denominated in Swiss francs, which are collected daily by the Swiss National Bank (SNB). Our sample starts in January 1993, when the price series began to be systematically reliable across all available bonds, and ends in March 2019. In addition to a few select bonds issued before January 1993, the sample contains every Swiss government bond issued since then.

Figure 1 shows the Swiss government bond price series converted into yield-to-maturity for all 59 bonds in our sample. A yield-to-maturity is the internal rate of return on a bond if investors hold it until maturity. Plotting the yields for the various maturities in our data results in a yield curve. Our yield curve model proposes that changes in the yields across maturities are driven by a small set of risk factors. 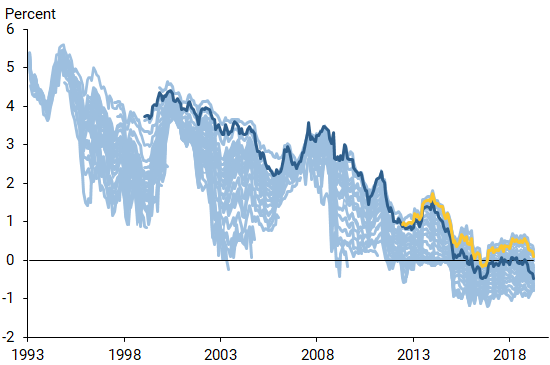 A model of bond prices with bond-specific premiums

To estimate the premiums embedded in the Swiss government bond prices, we use a standard yield curve model, augmented with a bond-specific risk factor as described in Andreasen, Christensen, and Riddell (2020). Depending on the time since issuance and the remaining time to maturity, different bonds respond differently to changes in the bond-specific risk factor, which facilitates the identification of this factor. Taking this time-dependence into account reflects the view that the extra premium investors are willing to pay for a safe bond depends on how much of the original bond issuance amount remains available for trading. As time passes, this amount tends to decline as more of its outstanding notional amount gets locked up in buy-and-hold investors’ portfolios.

Over time, these market dynamics raise the bond’s sensitivity to variation in the marketwide systemic component of the bond-specific premium captured by the added risk factor. By observing the entire cross section of government bond prices over time, we can identify the marketwide bond-specific risk factor and distinguish it from conventional fundamental risk factors in the model, which represent general patterns in the level, slope, and curvature of the yield curve. Note that our Swiss government bonds fit this characterization as they are very safe but not particularly liquid.

Figure 2 shows the average of the estimated safety premiums across all bonds trading at each point in time. This measure of the safety premium is significantly positive, with an average of 0.68 percentage point. It varies notably over time, with a maximum of around 1 percentage point in the summer of 2007 at the onset of the financial crisis and again following the bankruptcy of Lehman Brothers in September 2008. 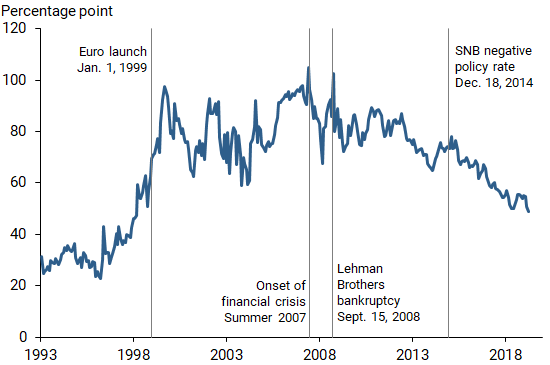 Note: Premiums averaged at each point in time across sample of all bonds from January 1993 to March 2019.

The safety premium seems to persistently shift upward sometime between late 1997 and mid-1999. Because this dramatic shift coincides with the introduction of the euro, we examine the potential link between the two.

We also note that the average safety premium appears to have trended lower ever since the SNB introduced negative interest rates in December 2014. In response to this policy, the entire yield curve of Swiss government bonds shifted downward (Christensen 2019). We consider whether the resulting higher opportunity costs of holding these bonds relative to other bonds might have reduced their safety premium.

Finally, we account for the fact that safe asset purchases by foreign central banks reduce the available stock of foreign safe assets. This suggests that the ECB’s sizable purchases of euro-denominated government bonds since January 2015 through its public-sector purchase program could make Swiss government bonds relatively less attractive and thus reduce the Swiss safety premium. Alternatively, the ECB program could have reduced the available stock of safe assets globally and hence raised the premium of all safe assets. Which of these two effects is more important would be apparent in the data.

To formally test these hypotheses, we use a statistical model to measure the effect of the launch of the euro, the introduction of negative interest rates, and the ECB’s asset purchase program on the Swiss safety premium. Our model accounts for a large set of potentially confounding factors. First, to avoid the effects of investor risk aversion, changes in uncertainty, and related demand for safe-haven assets, we include the Chicago Board Options Exchange Volatility Index, the spread between the Italian and the German 10-year government bond yields, the spread between the London interbank offered rate (LIBOR) and the yield on

Our results suggest that the launch of the euro led to a persistent increase in the Swiss safety premium of between 0.35 and 0.40 percentage point. To explain this result, we speculate that, once the euro was created, even the highly stable German and French bonds could be exposed to potential risks such as the bailout of a euro member country. All else being equal, such scenarios would increase the attractiveness of safe assets in a safe-haven country like Switzerland, which is not part of the euro area.

Finally, the results indicate a significantly negative effect on the Swiss safety premium from the ECB’s asset purchases since 2015 with an estimated loss of around 0.01 percentage point per 1 percentage point of GDP of asset purchases. Given the increase in the ECB’s asset holdings through the end of our sample, this would entail a cumulative effect of close to 0.20 percentage points between spring 2015 and spring 2019. Hence, the resulting decline in the available stock of safe assets in the euro area appears to have materially lowered the safety premium that Swiss safe assets are able to command.

In this Letter, we estimate the average safety premium of Swiss government bonds and find it to be large and positive with significant variation over time. Our analysis shows that the average safety premium persistently rose as much as 0.40 percentage point following the launch of the euro in 1999. However, it has gradually declined around 0.20 percentage point in recent years thanks to the ECB’s sizable purchases of euro-area safe assets. This mechanism appears to work by making Swiss government bonds relatively less attractive and unique within the class of European safe assets. Our findings point to the potentially important international impact that large asset purchases by central banks can have on the relative scarcity of safe assets globally. In light of the significant increase in such purchases since the pandemic started, these effects could have played a role again recently.

Nikola Mirkov is a senior economist at the Swiss National Bank.