Fiscal Multiplier at the Zero Bound: Evidence from Japan

The United States has implemented large-scale fiscal policy measures to help households and businesses cushion the economic fallout from the COVID-19 pandemic and to strengthen the recovery. The Federal Reserve has also supported the economy by keeping its policy rate at the zero lower bound. Evidence from Japan suggests that, in a sustained zero-bound environment, an unexpected increase in government spending has much larger and more persistent effects on real GDP, and even more so when the economy is in a recession.

The scale and scope of U.S. fiscal policy measures since the onset of COVID-19 are unprecedented in recent history. The $1.9 trillion American Rescue Plan became law on March 11, 2021, injecting a new round of fiscal stimulus to strengthen the economic recovery. This followed the $2.2 trillion Coronavirus Aid, Relief, and Economic Security Act and the $900 billion coronavirus relief and government funding bill in 2020. In addition, the Biden Administration has proposed $1.8 trillion in new spending and tax changes over 10 years and a $2.3 trillion infrastructure plan. At the same time, monetary policy has been highly accommodative, with the Federal Reserve’s policy interest rate remaining at the zero lower bound (ZLB).

In this Letter, we evaluate how the ZLB policy can influence the effectiveness of fiscal policy and how the fiscal stimulus effect varies depending on whether the economy is growing or in a recession. We use quarterly data from Japan for 1980 to 2019, including a 25-year span of zero interest rates beginning in late 1995. During those years under the ZLB, Japan has gone through four boom-bust cycles. This sample allows us to estimate the economic impact of fiscal stimulus during both ZLB and normal periods. It also allows us to study the interactions between the effects of the ZLB and recessions. We find that the stimulus effect of government spending is significantly larger and much more persistent under the ZLB than in the normal period. We also find that, in a sustained ZLB environment, fiscal stimulus is especially effective during recessions.

Fiscal stimulus under the ZLB

Estimating the fiscal multiplier under the ZLB is challenging because sustained ZLB events in advanced economies have been relatively rare (Ramey and Zubairy 2018). When they do occur, they often coincide with deep recessions, as was the case from December 2008 to December 2015, prompted by the Great Recession of 2007–09.

Confronting challenges with evidence from Japan

To overcome these challenges, we turn to quarterly data from Japan between 1980 and 2019, extending the approach of Miyamoto, Nguyen, and Sergeyev (2018).

Japan’s short-term nominal interest rate has stayed near zero since the fourth quarter of 1995 (Figure 1), providing 25 years of data on the ZLB period. Thus, the full sample allows us to estimate the government spending multipliers both with and without the ZLB constraint. Furthermore, during this long spell of ZLB, Japan has gone through four boom-bust cycles, with recessions indicated by the shaded bars in the figure. This helps us examine the interactions between the effects of the ZLB and of recessions. 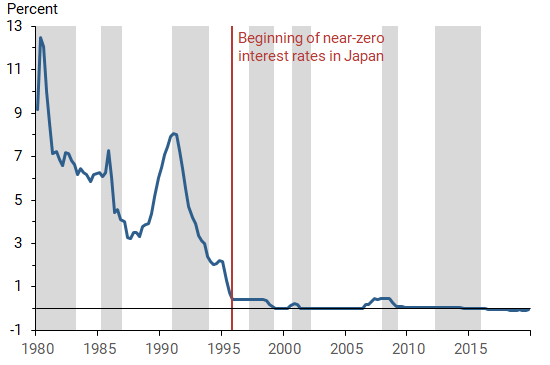 Note: Rates are measured by the average quarterly overnight bank call rates, 1980–2019. Gray shaded bars indicate recessions; the red line marks the beginning of the ZLB period in the fourth quarter of 1995. Source: Bank of Japan.

Figure 2 shows the cumulative fiscal multiplier on real GDP for periods up to 10 quarters from the impact of the government spending shock. The figure shows the estimated cumulative multiplier for the ZLB period (green line) and the normal period (blue line). It also shows the confidence bands for each, indicating the statistical uncertainty in our estimates. Specifically, assuming our model is correct, the figure shows that the shaded areas contain the actual value of the cumulative fiscal multiplier roughly two-thirds of the time. 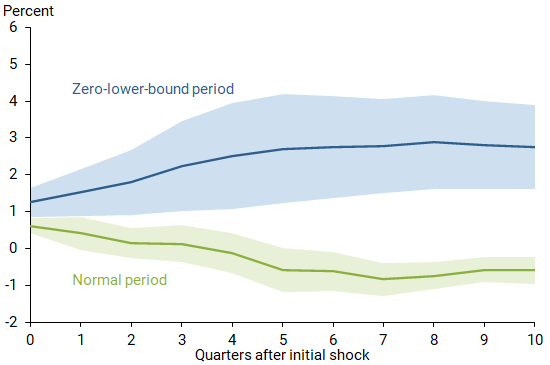 Note: Cumulative effects of a government spending shock on real GDP in Japan for the ZLB period (blue line) and the normal period (green line). Shaded areas indicate the 68% confidence band around each estimate.

We also find that, under the ZLB, a government spending shock raises inflation expectations significantly, but it has essentially no effect on the nominal interest rate. Thus, the shock reduces the real interest rate and stimulates private consumption and investment demand, consistent with the theory.

The recessions and expansions during the ZLB period in Japan also give us the opportunity to examine potential interactions between the ZLB and business cycles. Previous studies suggest that the fiscal multiplier is typically larger in recessions than in expansions. For example, Auerbach and Gorodnichenko (2012) find that fiscal policy is much more effective in recessions than in expansions in the United States and some other advanced countries. Barnichon, Debortoli, and Matthes (2021) argue that government spending can be particularly effective during a deep recession when monetary policy is constrained at the ZLB.

We use the sustained ZLB environment in Japan to estimate the magnitude of interaction between the ZLB and recessions. Figure 3 shows that, during the ZLB period, the government spending multiplier in recessions can be well above 2 and highly persistent (blue line). This contrasts with periods of economic expansion (green line), when the multiplier is small and not significantly different from zero. This evidence supports the idea that fiscal stimulus can be particularly effective in a recession when the monetary policy rate is constrained by the ZLB.

Figure 3
Multipliers in the ZLB period: Recessions versus expansions 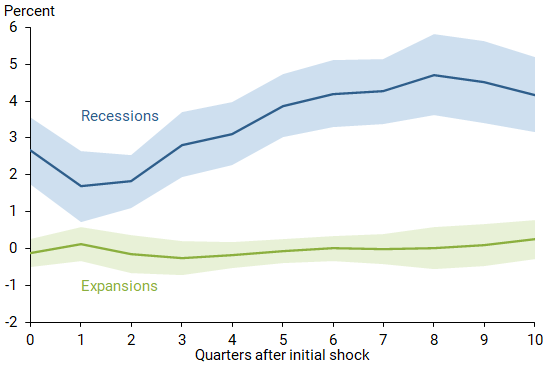 Note: Cumulative effects of a government spending shock on real GDP in Japan under the ZLB for recessions (blue line) and expansions (green line). Shaded areas indicate the 68% confidence bands around each estimate.

We use Japanese data to estimate the government spending multipliers in periods when the policy rate is constrained by the zero lower bound. Our estimation suggests that increasing government spending under the ZLB can have much larger and more persistent expansionary effects on overall output than during normal, non-ZLB periods. The evidence also suggests that fiscal stimulus can be particularly effective under the ZLB when the economy is in a recession.

Our evidence from Japan should be interpreted with caution when evaluating the effectiveness of the current U.S. fiscal policy. For example, our estimates take the ZLB constraint for monetary policy as a given. However, a sufficiently large fiscal policy shock could push up inflation to a point that triggers an increase in the interest rate, which would undo some of the expansionary effects of fiscal stimulus. Also, our study does not differentiate between the effects of government consumption and government investment; as such, our findings do not directly apply to the potential impact of infrastructure spending currently under discussion in the United States.

Blanchard, Olivier, and Roberto Perotti. 2002. “An Empirical Characterization of the Dynamic Effects of Changes in Government Spending and Taxes on Output.” Quarterly Journal of Economics 107(November), pp. 1,329–1,368.