The average inflation rate in Japan has remained far below the 2% target adopted by the Bank of Japan (BOJ) ever since it was officially announced in 2013 despite highly accommodative monetary policies. This highlights the concern that, when inflation falls below target for a prolonged period, the public may expect future inflation to continue to do so, which can lead to skepticism about the central bank’s ability to achieve its target.

In contrast, a number of studies (for example, Boubaker 2018 and Ramey and Zubairy 2018) suggest that fiscal policy could be more effective under such conditions, because low inflation expectations usually coincide with short-term interest rates at or below zero. They found that the correlation between government spending and economic activity is high when interest rates are near their effective lower bound. In general, if fiscal policy boosts economic activity, it could lead to tighter labor market conditions and eventually raise inflation and inflation expectations.

Moreover, the Japanese government’s large fiscal packages during the COVID-19 pandemic, combined with Japan’s high debt-to-GDP ratio, likely raised speculation that the BOJ would purchase more Japanese government bonds to further support the economy. As the COVID-19 crisis deepened, the government announced several extensions and expansions of existing stimulus totaling about $3 trillion, or 60% of Japan’s nominal GDP. However, the effective actual net increase in government spending was significantly smaller though still substantial at 15% of nominal GDP (Gornostay and Sarsenbayev 2021).

Despite the BOJ’s announced 2% target for Japanese Consumer Price Index (CPI) inflation excluding fresh food, actual inflation remained below 1% before the pandemic, except for a brief period in 2014 and early 2015 (Figure 1). The pandemic and associated negative economic shock in the spring of 2020 caused another spell of deflation in Japan that extends nearly to the end of our sample. These developments likely pushed investors’ inflation expectations down further. 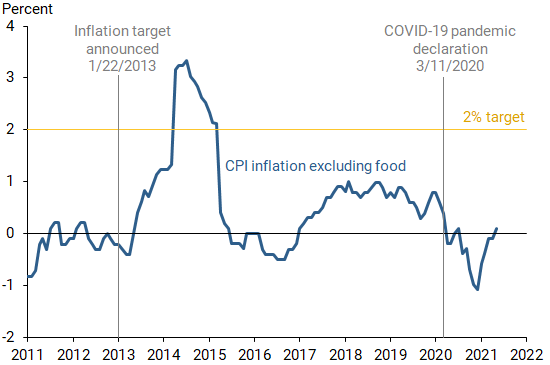 To gauge the changes to Japanese inflation expectations during the pandemic, we produce market-based estimates of inflation expectations using a Gaussian model of nominal and real yields (see Christensen and Spiegel 2022a for details). The real yields in the model come from Japanese inflation-indexed bonds, which protect against inflation by adjusting coupon and principal payments to compensate holders for increases in the Japanese CPI from issuance to maturity. In addition, the inflation-indexed bonds issued since 2013 also provide “deflation protection,” in that they pay off their original nominal principal at maturity even if there is price deflation. Due to Japan’s very low inflation and occasional deflation over the past 20 years, this protection is valuable.

The difference between nominal and real yields of the same maturity, commonly known as the breakeven inflation (BEI) rate, is widely used to assess inflation expectations. However, there are two distinctions between the BEI rate implied by Japan’s inflation-indexed bonds and expected inflation. First, BEI does not account for the value of deflation protection in Japanese inflation-indexed bonds issued since 2013. This enhancement raises the value of inflation-indexed bonds and pushes down their real yields, creating an upward bias in the BEI as a measure of inflation expectations. Second, our BEI rate embeds an inflation risk premium. We therefore first adjust our estimate of BEI for the option value of deflation protection by calculating the model-implied real yields in the absence of deflation protection. We refer to this estimate as the adjusted BEI. We then separate adjusted BEI into components representing investors’ inflation expectations and the residual inflation risk premium using a formula based on the absence of bond market arbitrage opportunities. Note that the risk premium may be positive or negative, depending on the compensation investors require for exposure to risks associated with future inflation.

Figure 2 displays our estimates of BEI, adjusted BEI, expected inflation, and the inflation risk premium over a 10-year horizon during the past decade, including the COVID-19 period. The pandemic era in Japan is characterized by a large increase in the value of deflation protection, which generates a substantial wedge between BEI (yellow line) and adjusted BEI (blue line). The wedge makes adjusting for deflation protection very important. Indeed, by looking solely at the fitted BEI, one could incorrectly conclude that inflation expectations had firmed. Instead, breaking down the model components shows that investors’ long-term inflation expectations continued to decline to nearly zero during the pandemic (red line), even though most of the decline in the adjusted BEI comes from a sharp drop in the inflation risk premium (green line). We note that the long-term inflation forecasts reported semiannually in the Consensus Forecasts surveys of professional forecasters (blue dots) also fell relative to their pre-pandemic levels, but to a lesser extent.

Figure 2
Components of the 10-year BEI 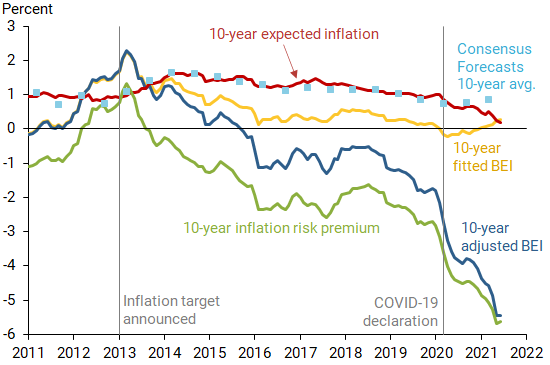 We use our model estimates to measure the influence of Japanese fiscal policy responses to the COVID-19 pandemic on inflation expectations. From the start of 2020 to mid-2021, the 10-year adjusted BEI fell 3.5 percentage points, leaving ample room to lift inflation expectations if households perceived the government’s announcements as credible signals that economic activity would rise, implying less risk of future deflation.

The announced sizes of the fiscal packages were significant. Moreover, the negative short-term interest rate prevailing in Japan during the pandemic meant government borrowing was inexpensive and could be expected to result in more substantial boosts to activity per yen spent.

To investigate this possibility, we look at seven key fiscal policy announcements between February and December 2020, with package values ranging from $96 million to $989 billion in U.S. dollar values. We calculate the estimated changes in the 10-year fitted and adjusted BEI on each event date and the corresponding estimated changes in 10-year inflation expectations. None of the fiscal events in our study appear to have generated any persistent, statistically significant changes in either adjusted BEI or expected inflation, as measured by our model. Only one event—the second package valued at $9.6 billion announced on March 10, 2020—yielded a measurable increase in expected inflation, and the response was an upward tick of only 1 basis point (0.01 percentage point).

Two caveats to our findings should be noted. First, the tepid response to the announced aggressive fiscal expansions may have stemmed from public pessimism about how much of the announced plan would result in actual spending. Indeed, pessimism may have been warranted because new spending, while substantial, was far below the announced values of the fiscal packages. Second, because we examine one-day event study responses to the fiscal spending announcements, spending increases may have been partly anticipated, which could have left little further room for inflation expectations to rise on the announcement date. Still, as Figure 2 shows, our estimate of expected inflation declines steadily throughout the period studied, so we see little evidence of anticipatory effects.

Implications for the United States

One lesson the Japanese case illustrates is that extended departures from announced inflation targets may prove difficult to reverse. The Japanese government announced unprecedented efforts at fiscal expansion, which resulted in only minimal implications for inflation expectations. This suggests that, when expectations become anchored away from announced central bank targets in either direction, the public may be more skeptical of the willingness or ability of the central bank to achieve its announced target.

Such challenges have been mirrored by other countries that worked over long periods to bring inflation down to a desired target. For example, when Brazil began its inflation targeting regime in 1999, it lowered its target gradually over several years towards a long-term value and allowed for wide variation above and below announced targets. This policy path reflected the understanding that attempting to lower inflation too quickly from recent actual levels would have had costly implications for economic growth.

While current data, such as survey evidence, indicate that long-term inflation expectations in the United States remain anchored around the Federal Reserve’s goal of 2% on average over time, the experiences of both Japan and Brazil illustrate the perils of deviating from the target for extended periods. Once inflation expectations move persistently away from the central bank target, it can be challenging to bring them back to target levels. The policy lesson for the United States is that vigilance in bringing the inflation rate back to the announced target level over the medium term is warranted.