Finding a Soft Landing along the Beveridge Curve

As U.S. economic growth slows this year, a key question is whether job openings can fall from historical highs without a substantial rise in unemployment. Analyzing the current Beveridge curve relationship between unemployment and job openings presents a meaningful possibility that labor market pressures can ease and achieve a “soft landing” with only a limited increase in unemployment. This view is supported by high rates of job matching in the U.S. labor market in 2022, despite ongoing employment reallocation across industries.

Economic growth appears to have slowed substantially this year, likely due in part to ongoing tightening of monetary policy. This has raised questions about how the slowing economy will affect jobs and whether a “soft landing” in the labor market is possible. In other words, can job openings fall from current historically high levels without a substantial increase in unemployment, as recently argued in other Federal Reserve analysis (see Figura and Waller 2022). This hypothetical outcome could alleviate upward wage and price pressures without substantial damage to the labor market and workers’ well-being.

The likelihood of achieving such a soft landing hinges on the tradeoff between lower job vacancies and higher unemployment, an empirical relationship known as the Beveridge curve. The shape and position of the curve reflects the underlying process of matching workers and job openings. This job-matching process can change over time, so it’s important to assess the relationship in real time to understand its potential implications for the current labor market and monetary policy.

In this Economic Letter, we first analyze alternative Beveridge curves that fit the recent labor market data. The results are not conclusive: the data are consistent with a wide range of unemployment increases associated with likely declines in job vacancies. A further step shows little evidence of ongoing problems with the job-matching process, suggesting that the Beveridge curve has not shifted substantially relative to where it was before the pandemic. Combined, our findings are consistent with the view that the increase in unemployment may be quite limited as job vacancies decline, although that outcome is far from guaranteed.

Where is the Beveridge curve?

The Beveridge curve is a graphical depiction of the relationship between job vacancies and unemployment. Figure 1 displays monthly data for this relationship from 1923 through June 2022; both series are measured relative to the labor force using data extended from Petrosky-Nadeau and Zhang (2021). The negative slopes of the two fitted Beveridge curves in Figure 1 indicate that vacancy and unemployment rates tend to move in opposite directions over the business cycle. This captures key elements of the job-matching process that pairs employers and unemployed job seekers to fill available jobs. The tradeoff can vary depending on the strength of the labor market: when the labor market is strong, with low unemployment and high vacancies, unemployment is likely to be relatively unaffected by increases in job openings. This will be reflected in the curve being quite steep. Intuitively, when lots of employers are looking to hire workers but few active job seekers are available, the process of filling job openings is slowed down by the relative scarcity of available workers. 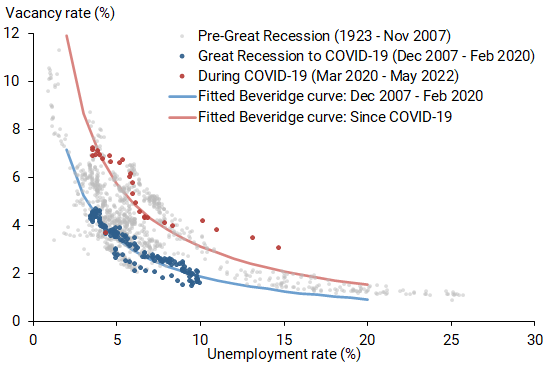 Beyond its slope, the position of the Beveridge curve captures structural features of the labor market that determine how readily job matches occur and how long they last. The ease of forming job matches, called “matching efficiency,” is reflected in how close the curve lies to the origin: a move toward the upper right implies a consistently higher level of unemployment for all levels of vacancies, hence lower efficiency in matching between the unemployed and vacant positions. Increases in the rate of job separations (primarily due to layoffs) or a reduction in its inverse, the durability of job matches, have effects similar to matching efficiency, shifting the Beveridge curve outward. Understanding the effects of labor market adjustments thus requires knowledge of both the slope and position of the curve. For example, Figura and Waller (2022) argue that the Beveridge curve is steep but may be misperceived as flat because it has shifted position in response to sharp movements in job separations during the pandemic.

Because the Beveridge curve tends to shift over time, it is helpful for consistency to focus on a subsample of data points for which structural factors in the labor market are roughly stable. Thus, the blue line in Figure 1 shows the fitted Beveridge curve for monthly data from the Great Recession to just before the pandemic recession, December 2007 through February 2020 (blue dots). We start with a standard mathematical representation that assumes a constant proportional increase in job matching relative to changes in vacancies and unemployment, known as the Cobb-Douglas functional form.

We then examine what happens when we incorporate the most recent data points, preserving all the properties of the previous matching function (blue line) except for the efficiency of the underlying matching process. In other words, we shift the first Beveridge curve to fit data points that include historically high job vacancies and low unemployment (red dots)—excluding the early months of the pandemic (March through June 2020) when extraordinarily large job losses occurred. The outward shift to the new Beveridge curve in Figure 1 (red line) implies a significant reduction in matching efficiency of about 25%. It also implies sizable increases in the unemployment rate as vacancies fall, assuming movements occur along that curve: for example, relative to the May 2022 value of 3.6%, unemployment would be estimated to rise to 6.4% if the vacancy rate falls from its May level of 7.2% to its pre-pandemic peak of 4.6%.

We also explored an alternative that allows the job-matching response to changes in vacancies and unemployment to vary depending on their level, as described in Den Haan, Ramey, and Watson (2000, DRW). Figure 2 shows the resulting curve (yellow line), fitted to the pre-pandemic data similar to the blue line in Figure 1. The slopes of those two curves are very similar during more normal economic times, so much so that they are hard to distinguish based on conventional statistical standards. However, the curve in Figure 2 is very steep when unemployment is low and job vacancies are elevated. This is consistent with the discussion in Figura and Waller (2022) and with the possibility that unemployment could rise relatively little as vacancies fall. Compared with our earlier example, a decline in the vacancy rate to its pre-pandemic peak of 4.6% would be associated with the unemployment rate rising only to 4.4%, 2 percentage points less than implied by the red curve shown in Figure 1. 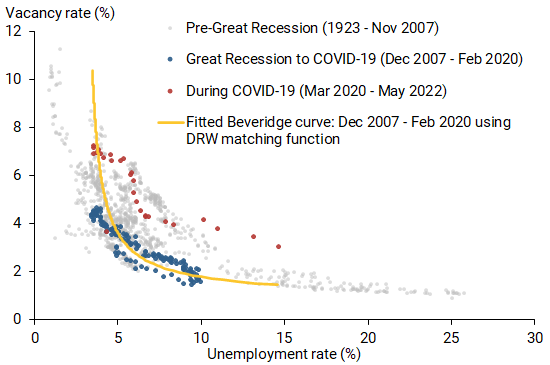 Employment reallocation and matching efficiency during the pandemic

Our analysis has identified a wide range of possibilities for the shape and position of the Beveridge curve. To narrow those possibilities, we focus on the potential role of employment reallocation in determining match efficiency.

Some researchers (for example, Barrero et al. 2021) have argued that the COVID-19 recession and recovery created a reallocation shock that has necessitated unusually large movements of jobs and workers across industries. These movements are driven by persistent changes in demand patterns, such as shifts away from in-person services toward delivered goods and shifts towards industries and occupations that support remote work. Employment reallocation can create challenges for employers and workers that impede the job-matching process and cause an outward shift of the Beveridge curve. Blanchard, Domash, and Summers (2022) recently explored this idea and argued that ongoing employment reallocation following the COVID shock means vacancies are unlikely to drop without a substantial increase in unemployment.

To illustrate the excess reallocation of workers, Figure 3 displays the dispersion of nonfarm payroll employment growth across the 13 major industry categories, computed as the employment share weighted standard deviation of 12-month payroll employment growth. This measure has been running quite high relative to historical patterns. For example, as of June 2022, the series is about three times larger than it was at a similar point during the employment recovery from the Great Recession of 2007–09 in March 2014. Higher employment growth dispersion raises the possibility that reallocation challenges have shifted the Beveridge curve out. 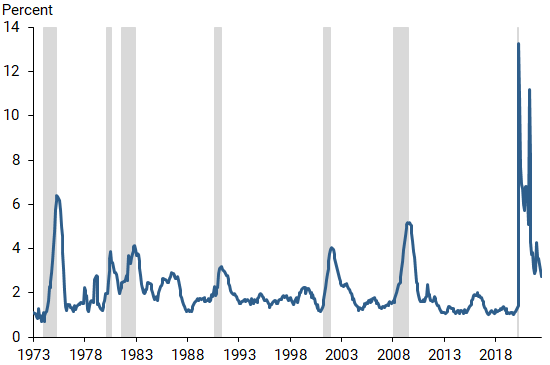 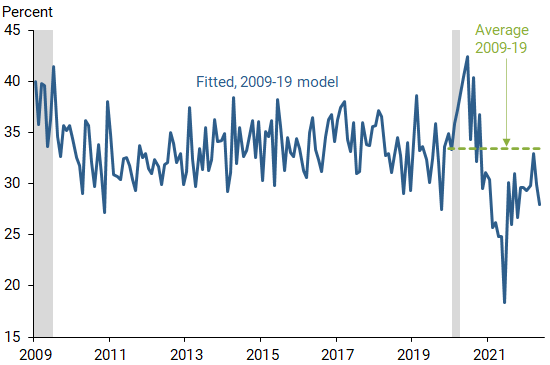 We further assess the potential effects of industry employment reallocation by regressing the matching efficiency series on our industry employment dispersion measure, using overall employment growth to normalize the rates for comparison. This analysis reveals no statistically meaningful negative relationship between the reallocation measure and matching efficiency, either over the short time frame highlighted here or for longer time frames.

Our analysis suggests that the job-matching process is not substantially distorted relative to its pre-pandemic state, even with continued high levels of industry employment reallocation. This is consistent with the view that recent unemployment-vacancy combinations lie on the steep portion of a Beveridge curve that is close to its pre-pandemic location. Similar to Figura and Waller (2022), our findings support the idea that unemployment may not rise substantially as growth slows and job vacancies decline.

These findings come with some caveats. Our analysis is limited by our specific, narrow set of underlying statistical assumptions, which are necessary for real-time analysis but may prove inadequate for a full understanding of the current job-matching process. Moreover, a crucial factor determining the location of the Beveridge curve is the rate of job separations. If layoffs were to rise, for example because of recession concerns, unemployment would rise independently of changes in the vacancy rate.

Brandyn Bok is a research associate in the Economic Research Department of the Federal Reserve Bank of San Francisco.

Robert G. Valletta is associate director in the Economic Research Department of the Federal Reserve Bank of San Francisco.

Mary Yilma is a research associate in the Economic Research Department of the Federal Reserve Bank of San Francisco.

Figura, Andrew, and Chris Waller. 2022. “What Does the Beveridge Curve Tell Us about the Likelihood of a Soft Landing?” Federal Reserve Board of Governors FEDS Notes, July 29.