Current Recession Risk According to the Yield Curve

The slope of the Treasury yield curve is a popular recession predictor with an excellent track record. The two most common alternative measures of the slope typically move together but have diverged recently, making the resulting recession signals unclear. Economic arguments and empirical evidence, including its more accurate predictions, favor the difference between 10-year and 3-month Treasury securities. Recession probabilities for the next year derived from this spread so far remain modest.

The U.S. economy has recovered quickly from the pandemic recession and is currently in a strong expansion, with robust growth and a very strong labor market. However, some concerns about the durability of this expansion have emerged, due in large part to high inflation, new COVID-19 outbreaks overseas, and geopolitical events such as the war in Ukraine. Indeed, these concerns have recently shifted the focus of public debate to the question of whether the next recession is imminent and when it might begin.

While economic forecasting is complex, one forecasting rule has an excellent track record: when short-term interest rates rise above the level of long-term rates, a recession almost invariably follows within the next year or two (Bauer and Mertens 2018a). Indeed, prior to all 10 U.S. recessions since 1955, the Treasury yield curve inverted—switching from an upward to a downward slope—as interest rates on shorter maturity Treasury securities rose above those with longer maturities. Given these patterns, the shape of the yield curve has become the most closely watched recession indicator in financial markets.

In April, the Treasury yield curve began exhibiting a somewhat unusual shape that one might view as sending mixed messages. At the short end, for maturities of less than a year, yields have remained well below long-term rates, suggesting little recession risk. By contrast, medium-term rates have gotten closer to long-term rates such that ten-year and two-year yields briefly inverted, heightening recession concerns. In this Economic Letter we discuss these different signals and how to interpret recent estimates of recession probability.

The risks to the U.S. and global economic outlook have increased significantly in recent months, as discussed in recent news coverage (see Casselman 2022). With elevated rates of inflation and heightened global economic uncertainty, recession concerns have been mounting. The New York Fed’s March 2022 Survey of Primary Dealers reflects this sentiment, with respondents seeing a 20% probability of the global economy being in a recession six months later, a notable increase from earlier surveys.

These rising concerns are reflected in recent shifts in the U.S. Treasury yield curve. Figure 1 shows its evolution based on four individual dates since December 2021. Two patterns are particularly noteworthy. First, the entire yield curve has shifted upward, likely due to revised expectations about inflation and monetary policy. Second, the middle part of the curve, consisting of rates with medium maturities around 1–3 years, moved up noticeably more than the rates for the longest maturities. Very short-term rates move almost in lockstep with the federal funds rate, the short-term policy rate targeted by the Federal Reserve, which was lifted above its zero lower bound in mid-March. Medium-term rates are driven by expectations about the path of the policy rate, and financial market participants now anticipate a steeper path than they did a few months ago, as evident also from rates on federal funds futures and surveys of professional forecasters. These shifts have created a modest hump in the yield curve. 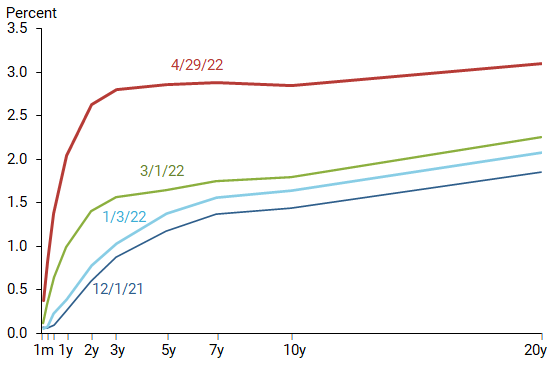 There are different ways to measure the slope of the yield curve and determine whether it is inverted. The most common measure is a term spread, the difference between a long-term and a short-term interest rate. Its exact definition depends on the choice of maturities of the interest rates used in the calculation. The most popular measure among financial market professionals is the term spread between the ten-year and the two-year yields (10y–2y). According to this measure, a recession is likely to follow when the ten-year yield falls below the two-year yield. By contrast, most academic research, going back at least to Estrella and Mishkin (1998), has used the spread between the ten-year and three-month Treasury rates (10y–3m). Historically, these two spreads have been highly correlated, and both turned negative at the end of economic expansions, correctly foreshadowing the next recession. Consequently, the distinction between the two measures has not been particularly important.

Figure 2 shows the evolution of both spreads since 2015; over most of this sample, the two series have moved together closely, as they usually do. Since late 2021, however, the two spreads have diverged, and a significant wedge has opened up. The hump of the yield curve has pushed the 10y–2y spread close to zero, signaling elevated recession risk. By contrast, the 10y–3m spread has widened, since long-term rates have risen faster than short-term rates, indicating low risk of an impending recession. The divergence of these two key term spreads has few historic precedents and leads to conflicting signals about the likelihood of a recession. 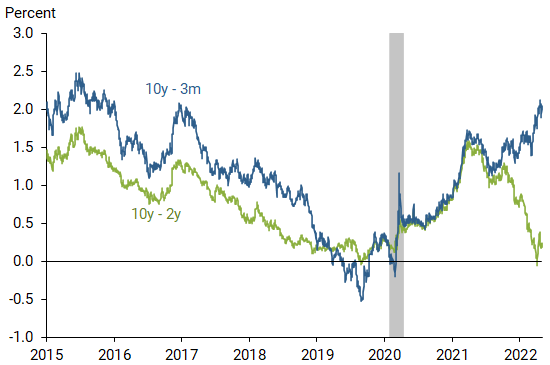 The mixed signals raise the question of which term spread is more relevant and credible.

Several economic mechanisms contribute to the predictive power of the yield curve (Bauer and Mertens 2018a). One of the most important factors is that the term spread reflects market expectations about the future course of monetary policy. When the economic outlook worsens, the central bank is expected to soon begin a series of policy rate cuts, and expectations of such monetary easing would be reflected in yields for longer maturities falling below those with shorter maturities. The 10y–3m spread reflects, among other factors, the difference between expected policy rates over the next ten years and the current rate. By contrast, the 10y–2y spread is mostly driven by expectations of policy rates between two and ten years from now. As a result, it effectively “differences out” those rate expectations over the coming two years, since these expectations are components of both interest rates that make up this spread.

The current situation illustrates the difficulties with this approach. According to surveys and financial markets, the policy rate is expected to rise significantly over the next two years. While the 10y–2y spread does not, by its nature, capture these expectations for near-term rate hikes, the 10y–3m spread incorporates them. This makes the latter a more comprehensive and thus preferable measure of the slope of the yield curve, particularly in the current situation.

Empirical evidence can also shed light on which predictor has historically been more successful in anticipating recessions. In Bauer and Mertens (2018b), our statistical analysis compared the predictive power of various term spreads. Using data over more than four decades, we evaluated the accuracy of several different spreads for predicting a recession one year into the future. Our main finding was that, while all spreads contained useful information for future recessions, the 10y–3m spread performed the best. In particular, it outperformed the 10y–2y spread by a noticeable margin.

An alternative term spread, recently proposed by Engstrom and Sharpe (2019), exclusively focuses on the short end of the Treasury yield curve. This spread is constructed as the difference between the 18- to 21-month forward rate and the current 3-month rate. The measure’s appeal for the current situation is that it focuses on expectations for the policy rate over the near future. Even though this spread leaves out rate expectations from two years onwards, its predictive power has historically been similar, albeit slightly lower, than that of the 10y–3m spread (Bauer and Mertens 2018b). Currently, both spreads remain at a comfortable margin from zero and signal low recession risk.

Both economic arguments and empirical evidence therefore suggest that the signal from the 10y–3m spread may be more informative than that from the 10y–2y spread. What are these signals currently showing?

To quantify the information in yield spreads, we follow common practice and estimate simple statistical models for the incidence of past recessions (Estrella and Mishkin 1998). We use monthly data from June 1976 to March 2022 to estimate the relationship between the term spread in each month and the likelihood of a recession 12 months ahead according to the recession classification from the National Bureau of Economic Research.

Figure 3 shows the alternative model estimates of the probability of a future recession for the two major term spreads. The estimated recession probability for the 10y–2y spread has climbed to around 17% at the end of our sample. Taken at face value, this does not seem particularly high. However, the model translates a 10y-2y spread of zero, corresponding to the prediction of a future recession, into a term-spread-specific threshold level of 22%. For example, both spreads inverted in 2019, signaling an upcoming recession, when estimated probabilities increased to 20 to 40%. These estimates suggest that a recession might have ensued even without the unpredictable pandemic shock. Viewed in this light, the current value of 17% is worrying, given that it is close to the critical threshold that would be a clear signal for a recession. 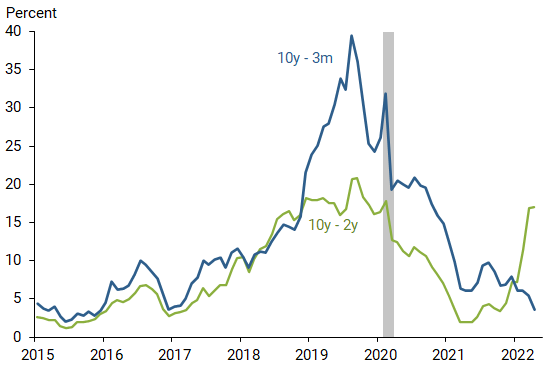 The probability implied by the model using the 10y–3m spread paints an entirely different picture. It has been on a downward trend and currently hovers around 4%, the lowest level since early 2017. This probability is far below the critical threshold for the 10y-3m measure of 32% that corresponds to a zero term spread, since the yield curve is far from an inversion by this measure. Thus, according to our preferred measure of the shape of the yield curve, recession risk is currently quite low.

Moreover, this outlook is unlikely to change in the near future for at least two reasons. First, following the current path of fed funds futures, it would take at least until early next year for the fed funds rate to reach the current level of the 10-year yield. By that measure, an inversion of the 10y–3m term spread is quite a ways off. And second, there is little support in the data for the 10y–2y term spread to be a leading indicator of the 10y–3m spread. Therefore, the recent inversion of the market participants’ preferred spread is unlikely to indicate an impending inversion between the 10-year and 3-month horizons.

Michael D. Bauer is a professor of economics at the University of Hamburg and research advisor in the Economic Research Department of the Federal Reserve Bank of San Francisco.

Casselman, Ben. 2022. “The U.S. Economy Is Booming. So Why Are Economists Worrying About a Recession?” New York Times, April 5.