Workers in service industries and occupations with a lot of close social contact suffered the highest job losses during the pandemic recession. This differed from previous downturns, which tended to have their most severe effects on industries with high concentrations of manual labor. As a result, the unemployment impact of the pandemic on different demographic groups has not followed historical patterns, particularly for Asian, Black, and female workers. The unemployment gap between these racial groups has not been as wide as previous economic fluctuations would have predicted.

Demographic groups experience economic recessions and expansions differently. For example, Black and Hispanic workers as well as male workers have historically had the largest fluctuations in unemployment rates across the business cycle (Duzhak 2021).

The economic fallout from the COVID-19 pandemic caused widespread distress, with stay-at-home-orders and restrictions on businesses affecting many Americans’ mobility and ability to work. In the pandemic recession, the national unemployment rate jumped to a staggering 14.7% in April 2020, then quickly fell to 6.9% by October. It has declined more gradually since then, to 3.6% as of April 2022. The pandemic hit service industries particularly hard, causing an unprecedented number of layoffs. And while employment in service occupations has grown by over 7 million jobs since plummeting in April 2020, it is still 783,000 jobs short of pre-pandemic levels.

The pandemic created uniquely challenging economic circumstances for different demographic groups. In this Economic Letter, my analysis reveals that the pandemic recession’s impact on these groups has not followed historical patterns. The unemployment rate impact for Asian workers during the pandemic downturn was larger than expected. And while Black workers experienced the highest unemployment rate among racial and ethnic groups for much of the pandemic, the relative change in their unemployment rate was substantially smaller compared with previous recessions.

One way to understand how the variation in economic conditions affects demographic groups differently is to measure labor market sensitivity. It compares how the change in a group’s unemployment rate in response to a change in economic activity differs from that of the average worker. Following Duzhak (2021) and Aaronson et al. (2019), I measure this unemployment rate sensitivity as the response of each group relative to the change in the national average. A sensitivity higher than 1 indicates that, relative to the overall job market, a group experiences larger increases in unemployment during recessions or, conversely, greater declines in unemployment during economic booms.

These group sensitivities are influenced by many factors, including age, level of education, and common jobs held. In particular, occupations that are traditionally more sensitive to economic fluctuations tend to rely more on manual labor and employ a larger share of Black and Hispanic workers, especially men (Duzhak 2021).

Is this time different? 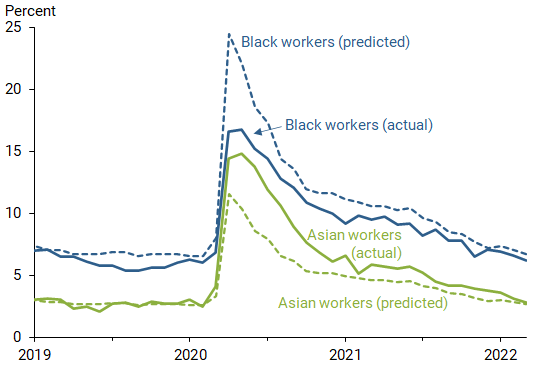 Figure 2
Changes in labor market sensitivities during the pandemic 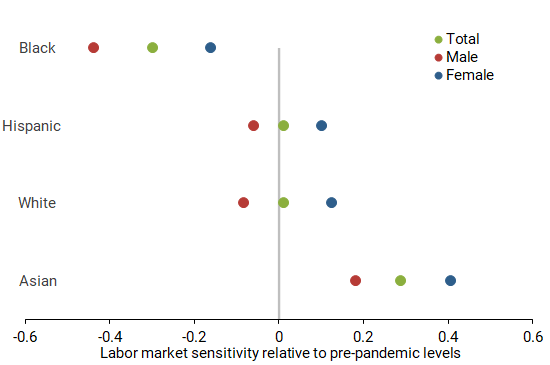 Comparing the results by gender in Figure 2 also shows that female workers in particular were adversely affected by the pandemic. Female labor market sensitivities (blue dots) increased by more than those for their male counterparts (red dots) in every group.

The role of occupation

To get a better understanding of what made the pandemic recession different, I break down the sample by occupation and gender to see if previous patterns held during this downturn. Historically, occupations play an important role in explaining different business cycle experiences among gender and racial groups. The occupations that tend to lose the greatest number of jobs during downturns include construction, production, and supply delivery. These jobs often require manual labor and employ more men than women.

To illustrate this, panel A of Figure 3 shows the evolution of employment for production and construction, the occupations that were impacted the most during the Great Recession of 2007–08. Panel B shows the same plot for personal care and food services, the most affected occupations during the COVID-19 pandemic. The figures track the change in employment relative to the beginning of each recession, indexing to 100 at the start.

Figure 3
Employment by occupation during the past two recessions 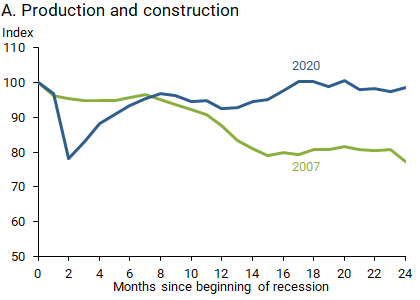 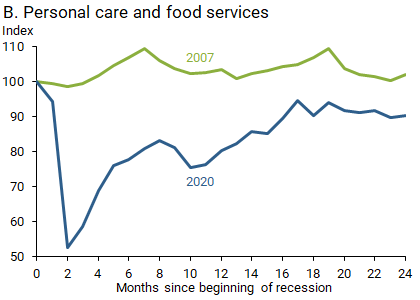 In the pandemic downturn, construction and production occupations have fared relatively well. An initial sharp drop of employment was short lived, with the construction industry recouping its losses by the summer of 2020. By comparison, the 2007–08 recession had a more gradual but long-lasting impact on production and construction jobs. During the first 15 months of the 2007–08 recession, employment levels shrank about 20% and recovered very slowly in the following years. Panel B shows that the biggest impact of pandemic-induced fluctuations was in food preparation and serving and personal care occupations, resulting in 4.39 million jobs lost. These jobs are typically in high-contact businesses, many of which had to close to mitigate the spread of the virus.

Gender and racial disparities by occupation

Women’s labor market experiences during the COVID-19 downturn sharply contrasted with those during the Great Recession. Previously, their labor market sensitivities had been 0.33 lower on average than those for men, meaning that women’s jobs were better shielded from economic downturns. The pandemic narrowed the gap to 0.22. Childcare responsibilities lowered mothers’ labor market participation, weakening their employment recovery (Lofton, Petrosky-Nadeau, and Seitelman 2021). Moreover, compared with occupations that employ a higher share of men, service occupations that employ a higher proportion of women laid off more workers, which resulted in greater unemployment for women relative to men.

Food preparation and serving, one of the occupations hit the worst by the pandemic, employs disproportionately more Hispanic workers than other ethnic groups. However, the overall unemployment sensitivity for this group stayed largely unchanged because some of the job losses sustained by Hispanic workers in service occupations were offset by more favorable conditions in construction as well as farming and fishing and production occupations.

Asian workers previously had the lowest labor market sensitivity. The onset of the pandemic, however, pushed their unemployment rate to a level above that for white workers, unlike during the Great Recession. The high representation of Asian workers in personal care and food occupations resulted in this group having the highest percentage of temporary layoffs during the first nine months of the pandemic. This caused Asian workers’ overall unemployment sensitivity to increase. Using a shift-share analysis to break down the change in sensitivity suggests that about 50% of the change is due to shifts in occupation sensitivities. The disproportionate impact on the service sector made the experiences of Asian women especially difficult. At the same time, higher sensitivities imply that the unemployment rate of Asian workers should decrease faster relative to the national average as the economy recovers. In fact, Asian workers are the only group that have recovered their losses in the labor force since the start of the pandemic.

Black workers, particularly men and younger workers, showed lower-than-expected unemployment reactions to the fluctuations in the national labor market during the pandemic. This is partly because over 25% of Black men are employed in production, transportation, and material moving occupations, and those occupations fared better than the service sector. However, changes in occupational sensitivities during the pandemic do not seem to explain a substantial part of the change in their unemployment sensitivity. Another explanation is that Black workers lost a smaller percentage of jobs within these occupations relative to other demographic groups. In production and supply delivery, they not only recovered employment losses but even added jobs relative to the beginning of the pandemic. In the service sector, Black workers lost around 25% of jobs compared with 45% lost by Asian workers relative to the start of the recession. Therefore, while Black workers experienced high levels of unemployment overall, their labor market sensitivity has been substantially smaller compared with previous recessions.