How much persistent versus transitory forces contribute to inflation influences the Federal Reserve’s ability to achieve its goal of 2% average inflation over time. If elevated inflation is driven mainly by persistent shocks, then a stronger and longer-lasting policy response is likely to be needed to bring inflation back down. Recent data show that consecutive changes in monthly inflation rates have tended to move increasingly in the same direction. This pattern suggests that the contribution of persistent shocks to inflation has been rising since mid-2019.

U.S. inflation has risen substantially over the past year, driven by supply and demand imbalances related to the COVID-19 pandemic and the associated policy responses (Jordà et al. 2022). The 12-month change in the personal consumption expenditures (PCE) price index rose from 1.4% in January 2021 to 6.6% in March 2022. Events stemming from the conflict in Ukraine may put additional upward pressure on inflation in coming months.

To achieve the Federal Reserve’s goal of 2% average inflation over time, Fed policymakers must assess how much persistent versus transitory shocks are driving movements in inflation. Transitory shocks are more benign because the resulting impacts on inflation tend to dissipate quickly, requiring little or no policy response. In contrast, persistent shocks can push inflation away from the Fed’s goal for sustained periods, requiring a stronger and longer-lasting policy response to bring average inflation back to 2%. From April 2021 through November 2021, five consecutive Federal Open Market Committee (FOMC) statements described inflation developments as “largely reflecting transitory factors” or “factors that are expected to be transitory.” But in testimony before the U.S. Senate Committee on Banking, Housing, and Urban Affairs on November 30, 2021, Fed Chair Jerome Powell stated “We tend to use [the word transitory] to mean that it won’t leave a permanent mark in the form of higher inflation. I think it’s probably a good time to retire that word and try to explain more clearly what we mean…Clearly, the risk of more persistent inflation has risen.”

This Economic Letter examines recent U.S. inflation in the context of historical data extending back to 1960. The correlation between current and past changes in inflation is informative about the likely path of future inflation. More specifically, a stronger correlation between consecutive changes in monthly inflation rates means that inflation changes are more likely to continue moving in the same direction. This pattern, in turn, would suggest that persistent shocks are becoming a more important driving force for inflation. Applying this methodology to U.S. inflation indicates that the contribution of persistent shocks to inflation began increasing before the start of the pandemic, and this trend has continued through the most recent data. The prospect that recent elevated inflation is being driven by persistent shocks raises the risk that inflation will remain above 2% for a longer period. In such an environment, a strong and long-lasting policy response may be needed to achieve the Federal Reserve’s goal of 2% average inflation over time.

Figure 1 plots monthly inflation rates from February 1960 to March 2022, as measured by the 1-month percentage change in the PCE price index (gray bars). The horizontal red line at 0.165% is equivalent to a 12-month compound inflation rate of 2%, corresponding to the FOMC’s longer-run goal announced in January 2012 (Board of Governors 2012). In other words, if monthly inflation readings were 0.165% for 12 consecutive months, then the resulting 12-month change in the PCE price index would equal 2%. In March 2022, the average monthly inflation rate over the trailing 12 months was 0.533% (blue line). This is the highest reading since January 1982 and is more than three times higher than the rate equivalent to the Fed’s goal. 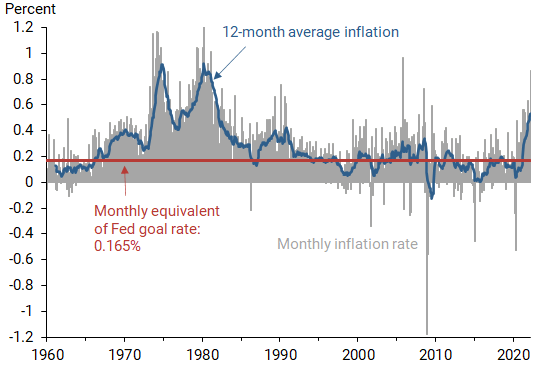 Monthly inflation rates are extremely volatile, exhibiting large upward and downward spikes. While the average monthly inflation rate over the trailing 12 months is much smoother, it can spend considerable time above or below the goal-equivalent rate. From January 2012 through February 2020, just before the start of the pandemic, the average monthly inflation rate over the trailing 12 months was below the goal-equivalent rate for 85% of the time, or 83 out of 98 months. Over the same period, the effective federal funds rate was set near zero for 48% of the time. This prolonged episode of mostly below-goal inflation, despite highly accommodative monetary policy, suggests that persistent downward shocks to inflation were an important driving force for inflation during those years.

Figure 2 provides a closer look at how the PCE price index has evolved since the Fed announced its 2% inflation goal in January 2012. From January 2012 to February 2020, the PCE price index rose at an average annual rate of only 1.39%, again pointing to the idea of persistent downward shocks to inflation. But since February 2020, the index has risen at a much higher average annual rate of 4.20%. This number includes two consecutive monthly declines in the index during March 2020 and April 2020, representing a period of transitory deflation.

In August 2020, the FOMC announced a revised policy framework that “seeks to achieve inflation that averages 2% over time” (Board of Governors 2020), although there is no specific mathematical formula to define the average. Since January 2012, the PCE price index has risen at an average annual rate of 1.96%—very close to the 2% goal. Given the recent elevated inflation readings, an important issue for Fed policymakers is whether recent inflation is being driven mainly by persistent or transitory shocks. If it’s being driven mainly by persistent shocks, there would be an increased risk that future average inflation will be higher than the Fed’s goal. 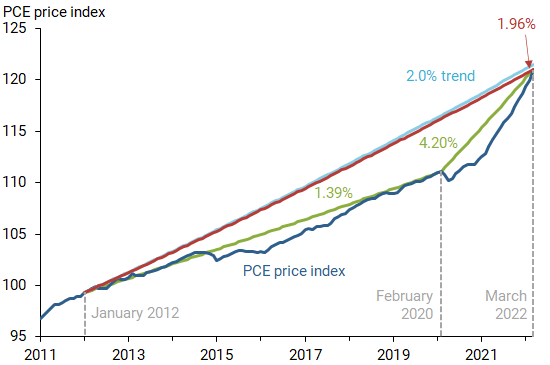 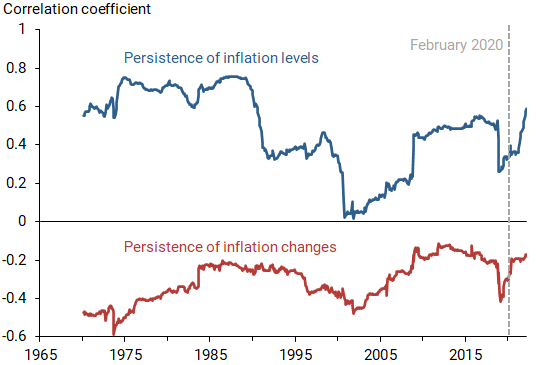 Figure 4
Contribution of persistent shocks to PCE inflation has risen 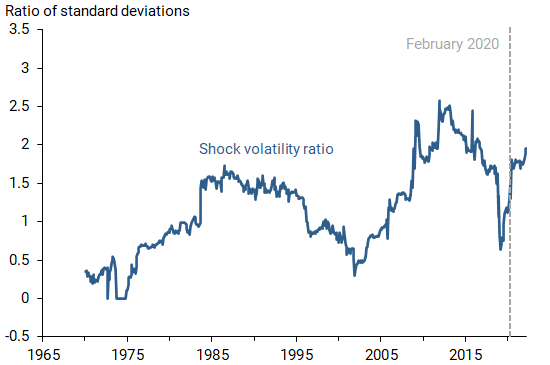 At the end of the data sample in March 2022, the shock volatility ratio is around 2, which means that persistent shocks to inflation are about twice as volatile as transitory shocks. This result implies that persistent shocks are the more important driver of recent inflation movements. The higher shock volatility ratio in recent data also implies that the optimal forecast should place more weight on recent elevated inflation readings, reflecting an increased likelihood that longer-run inflation has drifted up. But it is important to note that the FOMC’s decision in March 2022 to begin an “appropriate firming in the stance of monetary policy” would be expected to influence the future behavior of inflation.

A simple time series model for U.S. inflation along the lines of Stock and Watson (2007) suggests that persistent shocks to inflation have become more important in recent data. Historical patterns show that persistent shocks can push inflation away from the Fed’s longer-run goal for sustained periods, warranting a stronger and longer-lasting policy response versus the case when elevated inflation is driven mainly by transitory shocks.

Kevin J. Lansing is a senior research advisor in the Economic Research Department of the Federal Reserve Bank of San Francisco

Board of Governors of the Federal Reserve System. 2020. “Federal Open Market Committee Announces Approval of Updates to its Statement on Longer-Run Goals and Monetary Policy Strategy”(August 27).