Resolute and Mindful: The Path to Price Stability

As monetary policymakers work to deliver low and stable prices and an economy that works for all, they will need to be resolute and mindful. This means moving firmly toward our goal, while constantly calibrating our stance of policy so that we go far enough to get the job done, but not so far that we overdo it. The following is adapted from remarks by the president of the Federal Reserve Bank of San Francisco to the Orange County Business Council in Irvine, California, on November 21.

These days, I am often asked how I think about monetary policy decisions. And that makes sense. Especially now, when the tradeoffs that many people fear—high inflation or hard recession—seem so severe. My answer is this: I am resolute and mindful. Resolute in achieving our goals. And mindful about how we do it.

Now to some, it may seem like there is a conflict. They worry that resolute means “at any cost.” On the other side, people hear mindful and they worry we won’t go far enough—that we’ll stop short of getting the job fully done.

But resolute and mindful are complementary principles. And today, I will share how they inform my decisions as we strive to deliver low and stable prices and an economy that works for all.

From low to high inflation

I’ll start by talking about where we are and how we got here. Because this, of course, sets the stage for what lies ahead.

As many of you know, Congress gave the Federal Reserve two mandates: price stability and maximum employment. Right now, we are only meeting one of those goals. The labor market is very strong and well aligned with our employment objective. In contrast, inflation is unacceptably high and has been that way for almost two years.

High inflation feels unfamiliar to many of us. Before the pandemic, the United States had enjoyed almost four decades of low and stable prices, with inflation fluctuating only modestly between expansions and downturns. In fact, after the financial crisis of 2008, the Federal Reserve and other central banks struggled with persistently low inflation, which could leave the economy vulnerable to deflationary pressures and slower longer-run growth (Daly 2019). At that time, the concern was that the FOMC could not get inflation up to the 2% target (Williams 2017, Powell 2018, Kiley and Roberts 2017, and Mertens and Williams 2019). Clearly, a different problem.

Then COVID-19 hit and plunged the United States and the world into a steep downturn. The Federal Reserve cut interest rates, purchased long-term assets, and opened lending facilities—all in an effort to bridge the economy through the worst of the pandemic (Board of Governors 2020 and Hoops and Kurtzman 2021). U.S. fiscal agents took equally aggressive action, eventually putting about $5 trillion in federal spending into the economy (Parlapiano et al. 2022).

These unprecedented efforts worked. U.S. economic growth bounced back rapidly. By the second half of 2020, demand was growing and the labor market was on track to recover. Supply chains were lagging, but with vaccines coming online, there was hope that production would quickly return to full capacity.

Unfortunately, this did not occur. Global production and distribution continued to lag. And by early 2021, price pressures were starting to build—first in a few sectors directly affected by the pandemic, and then more broadly, as imbalances between robust demand and limited supply spread throughout the economy (Shapiro 2022).

By the fall of that year, inflation had risen further and looked to be gaining momentum. In contrast, unemployment was steadily declining and heading back to its historically low pre-pandemic level. In response, the Fed needed to remove accommodation and tighten policy much more quickly than it had previously signaled.

But there was a key challenge. At the time, most market participants, businesses, and households expected the Fed to maintain near-zero interest rates until late 2022 or even 2023. Moreover, while the asset purchase program had begun to wind down that November, it was not expected to conclude until the middle of 2022 (Board of Governors 2021a).

A long history suggests that surprising people with abrupt changes to policy can be costly, potentially disrupting financial intermediation and leaving lenders and borrowers unprepared. And because people have come to expect that the Fed will be transparent about its projected policy actions, catching people off guard can also erode hard-won trust. So, FOMC participants communicated that policy could change earlier than previously thought. In December 2021, the FOMC announced it would phase out its asset purchase program more rapidly and be prepared to raise rates as early as March 2022 (Board of Governors 2021b, c).

This and other forward guidance provided throughout that fall had an immediate impact. Almost overnight, financial conditions tightened. Market participants began pricing in expected future rate hikes, and businesses and households started readying themselves for a new interest rate landscape, pulling forward real estate purchases, restructuring debt obligations, and locking in longer-term fixed-rate loans. In other words, before we ever raised the federal funds rate, tighter financial conditions were already working their way through the system (Figure 1). Indeed, by the time of the first official rate hike of 25 basis points in March 2022, mortgage interest rates had risen three-quarters of a percentage point and broader financial conditions had tightened almost a full percentage point. 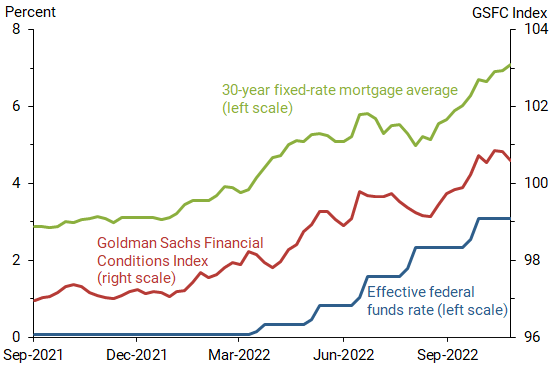 The responsiveness of financial conditions to our communications was notable and helpful. It gave us a head start on adjusting policy and mitigated the costs of an abrupt and unexpected change to the policy rate.

But of course, the job was far from done. Inflation was still on a troubling upward climb, and businesses and families were feeling the pain. Left untamed, inflation can also distort investment decisions, exacerbate economic inequalities, and reduce confidence in the Fed’s ability to achieve its goals, all of which can bridle longer run growth (Daly 2022). The pain of so many Americans coupled with the potential for long-term damage to the economy prompted the Fed to take aggressive action.

We began raising rates more quickly—expeditiously—moving the fed funds rate up in 75 basis point increments. This allowed us to swiftly withdraw accommodation and bring policy more in line with prevailing economic conditions. As of our last meeting just a few weeks ago, the target range of the federal funds rate stands at 3.75 to 4%, modestly restrictive relative to the neutral rate of interest. And we have signaled that there is more work to do.

This resolve has some people worried. They are concerned that resolute means unwilling to stop until the economy breaks or inflation hits 2%.

But that is not how I think about policy, nor is it the path communicated by the FOMC in its last statement (Board of Governors 2022a, b). Resolute does not mean heedless. This is especially important as we move into the next—and in many ways more difficult—phase of policy tightening.

As we work to bring policy to a sufficiently restrictive stance—the level required to bring inflation down and restore price stability—we will need to be mindful. Adjusting too little will leave inflation too high. Adjusting too much could lead to an unnecessarily painful downturn.

So, what specifically do we need to be mindful of? Many things, of course. But in our November FOMC statement, we mention three in particular: the cumulative tightening in place, the lags in monetary policy, and the evolution of the data.

Let’s start with cumulative tightening. Historically, we’ve used progress on the federal funds rate and where it stands relative to its neutral value as a gauge for policy restrictiveness. But in today’s world, that is only part of the picture. The funds rate does not capture the impact of the other tools in our tool kit, including the reduced asset holdings associated with balance sheet roll-off and the forward guidance we’ve provided about the future path of policy. It also misses the fact that central banks across the globe are tightening policy as well, likely amplifying the effects of our own rate hikes.

A more comprehensive way to gauge the actual level of tightening is to look at financial market conditions (see Choi et al. 2022 and the San Francisco Fed’s Proxy Funds Rate data page).  Several researchers have done this and found that the level of financial tightening in the economy is much higher than what the funds rate tells us. As the figure shows, this has been true for a while now (Figure 2). In fact today, while the funds rate is between 3.75 and 4%, financial markets are acting like it is around 6%. 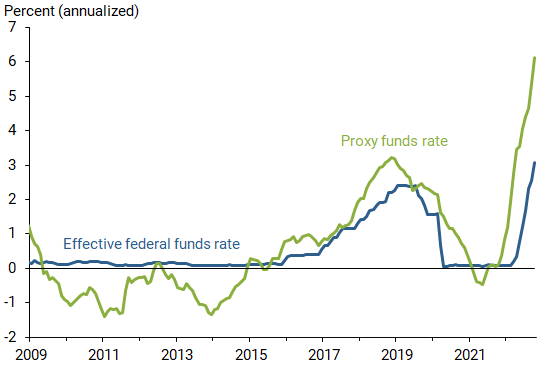 As we make decisions about further rate adjustments, it will be important to remain conscious of this gap between the federal funds rate and the tightening in financial markets. Ignoring it raises the chances of tightening too much.

Of course, we also have to account for the fact that, while financial markets react quickly to policy changes, the real economy takes longer to adjust. Overlooking this lag can make us think we have further to go when, in reality, we just have to wait for earlier actions to work their way through the economy. There is a large literature on the lags in monetary policy. And while there is no clear consensus on exactly how long they are, there is broad agreement that it’s not immediate and likely takes at least several quarters (Romer and Romer 2004 and Havranek and Rusnak 2013).

This is consistent with what we have seen in the data. The Fed started tightening policy close to a year ago. Interest-sensitive sectors like housing started to cool very quickly. As mortgage rates rose, home sales, construction activity, and the pace of house price gains slowed. Labor markets remain solid but are showing early signs of cooling. Job openings are down about 10% from their March high and job growth is slowing from its rapid pace last year. And although one month of data does not a victory make, the latest inflation report had some encouraging numbers, including a long-awaited decline in goods price inflation.

Looking ahead, I will be watching for further calming in these areas, as well as signs that pandemic-related imbalances between supply and demand are continuing to subside. I will also be in continuous dialogue with business leaders, workers, and community members in my District. Policy decisions also require that we look forward. Real-time conversations yield insights about how people are faring and how the economy is changing before they ever show up in the published data.

As we navigate back to price stability, we will need to pay attention to all of these things and adjust policy accordingly. And because the economy is dynamic, we will need to do this on an ongoing basis. We have to constantly calibrate our stance of policy to meet evolving conditions.

While resolute and mindful are not in conflict, there is a tension. And that’s what we want in policymaking.

We want to go far enough that we get the job done. That’s the resolute part. But not so far that we overdo it. And that’s the mindful part.

So, we will march unwaveringly toward our goals. Resolute and mindful, until the job is fully done.

Board of Governors of the Federal Reserve System. 2020. “Monetary Policy Report.” June 12.

Board of Governors. 2021a. “Federal Reserve Issues FOMC Statement.” November 3.

Board of Governors. 2021b. “Federal Reserve Issues FOMC Statement.” December 15.

Board of Governors. 2022a. “Federal Reserve Issues FOMC Statement.” November 2.

Board of Governors. 2022b. “Chair Powell’s Press Conference.” November 2.

Powell, Jerome H. 2018. “Monetary Policy and Risk Management at a Time of Low Inflation and Low Unemployment.” Speech at the 60th Annual Meeting of the National Association for Business Economics, Boston, MA, October 2.