If the Federal Reserve had expected the upcoming inflation surge back in March 2021, would it have acted differently? A new method to tackle such “what if” questions suggests that it may have been preferable to only moderately raise the federal funds rate during 2021, even with perfect foresight. In that case, inflation would have been about 1 percentage point lower as of June 2022, while unemployment would be about 2 percentage points higher. This result reflects the importance of the Fed’s dual mandate of price stability and maximum employment.

A number of critics have argued that the Fed has been behind the curve in its fight against inflation. Given the recent high inflation numbers, they argue that the Fed should have lifted the federal funds rate much earlier than March 2022. In fact, in a May 2022 interview, Fed Chair Jerome Powell said, “If you had perfect hindsight you’d go back, and it probably would have been better for us to have raised rates a little sooner” (Marketplace 2022). But if the Fed had tightened earlier, how different would the economy be now? Would inflation be lower? What would have happened to unemployment?

For policymakers, such “what if” questions arise constantly, both during the decisionmaking process and afterward to assess whether a policy decision was appropriate. Answering “what if” questions is difficult however, because it’s not possible to run controlled experiments at a country level or go back in time and try different approaches. In fact, in his interview, Chair Powell was quick to add, “I’m not sure how much difference [an earlier lift-off] would have made.”

This Economic Letter applies a recent approach designed by Barnichon and Mesters (2022) to answer “what if” questions with minimal assumptions. Using only two concepts that are already well known to policymakers—(1) what is the current economic outlook, and (2) how much a change in policy will affect that outlook—it is possible to provide quantitative answers to “what if” questions, including an evaluation of the response to the 2021 inflation surge. The findings suggest that the main effect of earlier action by the Federal Open Market Committee (FOMC) would have been slightly lower inflation at the cost of a substantially higher unemployment rate.

Answering “what if” questions with sufficient statistics

In the context of economic policy, a “what if” question takes the following form: what would happen if policymakers did Y instead of X? These types of economic policy “counterfactual” scenarios are notoriously difficult to study.

Studying counterfactuals first requires knowing what policymakers’ goals are. In the case of the Federal Reserve, the congressionally mandated goals are to achieve price stability, understood as 2% inflation, and maximum employment. These goals are often referred to as the dual mandate. The Fed aims to achieve the dual mandate over time by adjusting the path of the federal funds rate, an overnight interest rate.

In addition, examining counterfactuals typically requires using theoretical models, which are mathematical representations of the economy. Within the constructed world of an economic model, one can experiment with alternative policies to assess their economic effects. In the case of monetary policy, a counterfactual might be different levels of the federal funds rate at different points in time.

Unfortunately, the economy is highly complex, and mathematical models can provide only a simplified description of the underlying system. As such, models often miss important elements of reality, especially in exceptional times when many unprecedented events occur simultaneously. For instance, standard macroeconomic models are not well suited for analyzing the recent events associated with the COVID-19 pandemic and its effects. Models are unlikely to accurately capture such unprecedented events and, as such, may provide a distorted description of the economy, leading to misguided policy counterfactuals.

In this context, how can we approach “what if” questions? In recent work, Barnichon and Mesters (2022) propose a solution: they show that it is possible to study policy counterfactuals without having to rely on a fully specified economic model. Specifically, two sets of statistics are sufficient: a baseline macroeconomic forecast, known informally as the economic outlook, and how much adjusting the policy instrument will affect the economy, known informally as the policy multiplier.

Second, a large academic literature has estimated the marginal effects of policy, notably using so-called natural experiments. While economists cannot conduct controlled experiments, nature or history sometimes provides such natural experiments that allow them to tease out cause and effect in macroeconomics (Nakamura and Steinsson 2018). For instance, to estimate the effect of a monetary policy change, such as an interest rate hike, on inflation and unemployment, a natural experiment would be a policy decision made for a reason unrelated to the short-run evolution of inflation and unemployment. This could be when the Fed may have reacted to exceptional developments in financial markets or may have changed policy because of a change in FOMC members.

A rich body of prior economic research has developed methodologies for identifying such natural experiments—or monetary policy “shocks”—and using them to compute the marginal effect of a policy change. Barnichon and Mesters (2022) estimate the effect of raising the federal funds rate one-quarter percentage point (25 basis points) during one year using historical data over 1990–2007. Although the sample period is relatively short, it has the benefit of focusing on a fairly stable period in the conduct of monetary policy, as well as avoiding the zero lower bound period when there were no federal funds policy changes. However, one caveat is that the empirical effects from this previous period may be different in an episode like the pandemic.

The results, illustrated in Figure 1, point to two key patterns. First, monetary policy takes at least a year to substantially affect inflation. Second, a federal funds rate shock large enough to bring inflation down about 0.1 percentage point (pp) after two years would be expected to increase unemployment by about 0.3pp over the same period. This second finding quantifies the unemployment-inflation tradeoff that monetary policymakers must grapple with. That said, the shaded areas showing the 95% confidence bands indicate that these effects are estimated with substantial uncertainty. 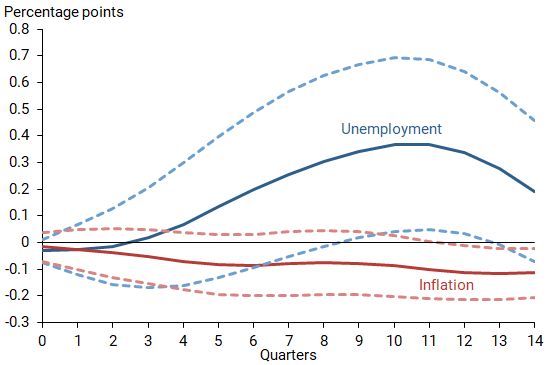 Note: For details, see Barnichon and Mesters (2022). Dashed lines denote the upper and lower ranges of the 95% confidence bands for the line of the same color.

With estimates of the two sufficient statistics in hand, we can look back to March 2021 and start asking “what if” questions. In March 2021, unemployment stood at 6.2% and inflation was low, with core personal consumption expenditures (PCE) price inflation sitting at 1.7% for the first quarter of the year. After the passage of the American Rescue Plan, a few economists worried that inflation tensions could develop due to the interaction of supply bottlenecks created by the pandemic and the strong demand boost injected by the fiscal package (see, for example, Blanchard 2021 and Summers 2021). Yet at the time, the FOMC anticipated a modest rise in inflation, and unemployment was expected to return slowly to its long-run level of around 4%.This outlook was generally shared by FOMC members and professional forecasters: for instance, as of March 2021, the median forecast in the FOMC’s Summary of Economic Projections (SEP) anticipated a modest 2.4% inflation rate for 2021, in line with the March 2021 Blue Chip inflation forecast of 2.3%.

Indeed, the reality turned out very different from the forecasts. Figures 2 and 3 plot the paths of inflation and unemployment through the first quarter of 2022. While unemployment declined as anticipated, core inflation reached historic highs. 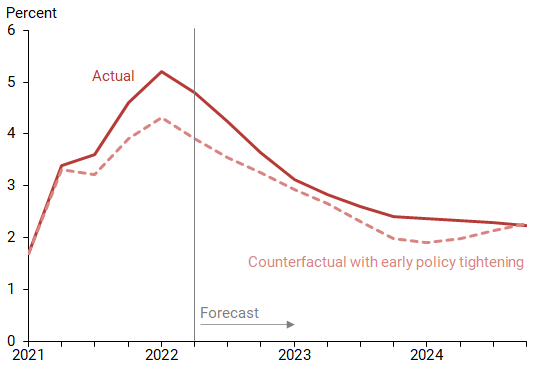 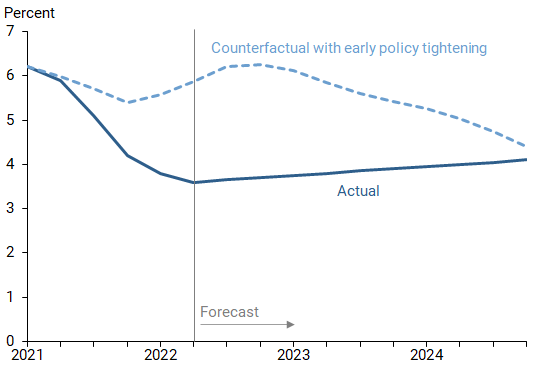 What if the Fed had foreseen the inflation surge?

In this context, an interesting question is whether, and more importantly by how much, the Fed might have raised the federal funds rate, if FOMC members had anticipated the inflation surge that was to come.

To study this question, imagine that we stand in March 2021 and the Fed foresees that, if they make no policy changes, we will experience the inflation outburst that in fact occurred. That is, assume that the Fed’s March 2021 forecast looks like the solid lines of Figures 2 and 3: these lines depict the actual paths until the first quarter of 2022 and the median forecasts from the FOMC’s June 2022 SEP afterward.

Given the estimated effect of policy (Figure 1), we can compute the change in the policy path that, as of March 2021, would have best stabilized inflation and unemployment. Figure 4 plots the results: the federal funds rate rises immediately by about 1pp in March 2021 and then increases to close to 2% by early 2022. With that intervention, the Fed would have dampened the rise in inflation at the cost of higher unemployment: the dotted lines show that inflation would be 1pp lower (Figure 2) and unemployment would be about 2pp higher (Figure 3). That said, these estimates are highly uncertain: the range of possible results within a 95% confidence level (not shown) indicate that inflation would be between 0.2pp and 2pp lower, while unemployment would be between 1pp and 3pp higher. 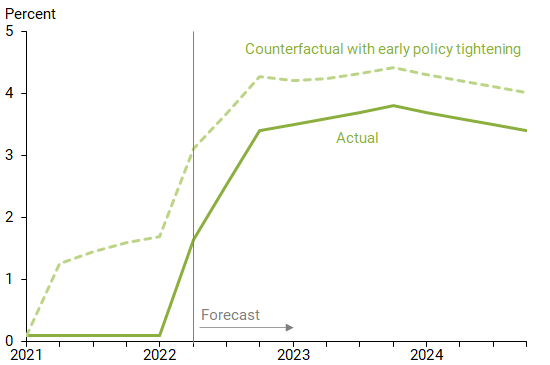 An important lesson of this exercise is that, even with perfect foresight, the Fed may have weighed the possible outcomes and may have chosen not to eliminate all of the rise in inflation. The reason is that higher rates to combat inflation also generate higher unemployment, creating a tension between the two goals in the dual mandate. When such tensions arise, the Fed takes into account the misses from its dual objectives when setting policy. If the Fed had no unemployment mandate and only focused on inflation, it could have kept inflation low, but at the cost of an unemployment rate climbing above 10% (not shown).

If the Federal Reserve had known about the upcoming inflation surge in early 2021 and had acted immediately to combat it, how different would the economy be today? Perhaps surprisingly, my analysis in this Letter suggests that it may have been preferable to only moderately raise the federal funds rate during 2021, such that inflation would be only about 1 percentage point lower now, and unemployment would stand around 6%, about 2 percentage points higher. The reason for this moderate policy reaction is rooted in the Fed’s dual mandate, such that any monetary policy aimed at containing inflation typically will take into account the response of unemployment. Naturally, these estimates are subject to substantial uncertainty, given the wide statistical ranges for our estimates and unique conditions associated with the pandemic economy.

Powell, Jerome. 2022. “Fed Chair Jerome Powell: “Whether We Can Execute a Soft Landing or Not, It May Actually Depend on Factors That We Don’t Control.” Marketplace, May 12 interview with Kai Rysdall.

Summers, Lawrence H. 2021. “Opinion: The Biden Stimulus Is Admirably Ambitious. But It Brings Some Big Risks, Too.” Washington Post, February 4.