First, why haven’t the boundaries of the 12 Federal Reserve Districts been adjusted to reflect changes in population or economic growth? Second, do the western states receive similar central banking and research services from the Federal Reserve, as do other areas of the country where Reserve Banks serve smaller geographic areas and populations?

The quick answer to your first question is that the Districts were designed to provide central banking services on a regional basis through Reserve Banks headquartered in key financial centers. Even when they were set up in 1913, the Districts varied widely in the population and geographic areas they served. Second, each of the Reserve Banks has a staff of economists who conduct research, provide current analysis, and publish reports and papers on their District economies. That's the short answer; I'll go into more detail in the paragraphs to follow.

A variety of entities, from financial centers to rural communities, from cities to states, vied for one of the proposed regional Reserve Banks or Reserve Bank Branch offices. The committee held hearings in many cities across the nation to gather input from bankers, the business community, government officials, and the public on where to locate the new Reserve Banks. The committee also conducted a poll of national banks.2

The Committee chose 12 cities as Reserve Bank locations, shown on the map below, in part because of their importance as banking centers in 1913. Most of the Districts with large geographic areas or populations or both, also had Branch offices that were designed to provide central banking services in other parts of the District.3 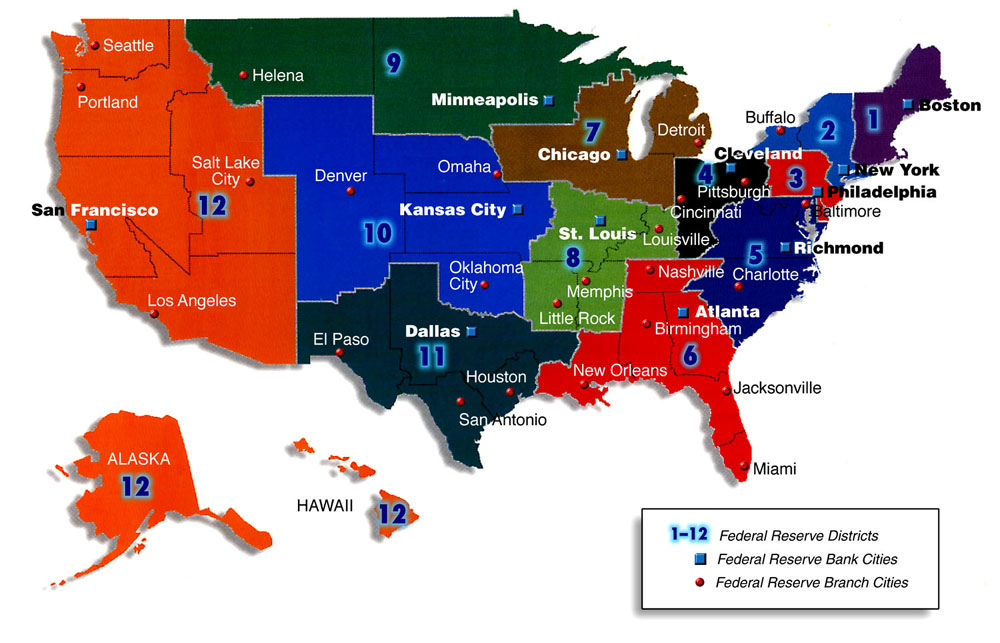 Over time, the Federal Reserve System's regional structure of banks and branches has provided central banking services to the nation, even as commerce, financial activity, and population have shifted. For example, since 1913 the share of population accounted for by each Federal Reserve District has changed. Three Districts, San Francisco, Atlanta, and Dallas, have recorded sizeable gains in the share of population since 1913; all but one of the other nine Districts have lost share. The Twelfth District has experienced the largest change; its share of the nation's population more than tripled from 1913 to 2000. By 2000 the District accounted for nearly one of every five U.S. residents, as Chart B shows.

How Does the SF Fed Provide Central Banking Services to such a Large Region with a Large Population?

Fed operations have been adjusted from time to time to reflect changing economic situations in the Twelfth District. In 1938 a Branch in Spokane was closed. In September 2001 a new processing center will be opened to handle the increased demand for cash services in the Phoenix area.

How Does the SF Fed Analyze the District Economy?

Analyzing conditions in the large and diverse Twelfth District does present some challenges, but economists like challenges! About half of the San Francisco Fed's 40 Economic Research department staff members are economists. The research staff advises Federal Reserve Bank of San Francisco President Robert T. Parry on national, international, financial, and regional economic conditions. Much of their research and analysis, including analysis of Twelfth District banking and economic trends, is available from the Bank's website.

3. The Federal Reserve Bank of Atlanta, with five, has the largest number of branches. Two Districts, Boston and Philadelphia, have no branches.

4. 1913 estimates are based on state resident population figures, and exclude the territories of Alaska and Hawaii. The Twelfth District, including Alaska and Hawaii, encompasses about one third of the nation's area. District population estimates (as a percent of the nation) are calculated at the state level, so that states that are included in two Federal Reserve Districts are allocated to the District with the majority of the state population.