What are business cycles and how do they affect the economy?

Business cycles are the "ups and downs" in economic activity, defined in terms of periods of expansion or recession. During expansions, the economy, measured by indicators like jobs, production, and sales, is growing--in real terms, after excluding the effects of inflation. Recessions are periods when the economy is shrinking or contracting.

A monthly indicator that moves with the economy

The National Bureau of Economic Research (NBER) has designated nine business cycles over the years from 1945 to 1991. During this period, the average business cycle lasted about five years; the average expansion had a duration of a little over four years, while the average recession lasted just under one year. The chart shows the periods of expansion and recession for the Composite Coincident Indicator Index from 1959 to 2002. This index, published by The Conference Board (http://www.conference-board.org/), moves very closely in line with current economic conditions. The chart plots the behavior of the Composite Coincident Indicator Index from 1959 to 2002. Note that the series typically climbs during expansion periods (between the trough and the peak of the business cycle) and falls during recessions (the shaded areas between the peak and the trough). 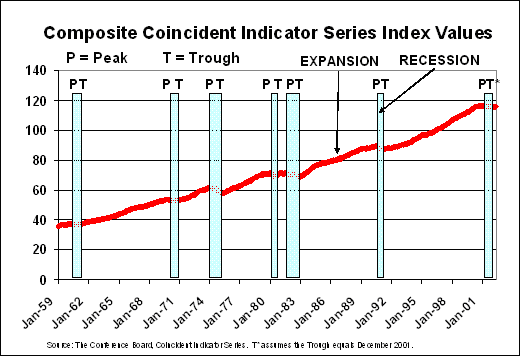 How does the NBER determine business cycle turning points?

The NBER a private nonprofit nonpartisan research organization, determines the official dates for business cycles. The NBER website (http://www.nber.org/) describes the key phases of the business cycle as follows:

A recession is a significant decline in activity spread across the economy, that lasts more than a few months and is visible in industrial production, employment, real income, and wholesale-retail sales. A recession begins just after the economy reaches a peak of activity and ends as the economy reaches its trough. Between trough and peak, the economy is in an expansion. Expansion is the normal state of the economy; most recessions are brief and they have been rare in recent decades.

How do NBER recessions differ from the common description of a recession as, "a period when real gross domestic product declines for two consecutive quarters?"

The NBER's seven-member Business Cycle Dating Committee examines monthly economic indicators that provide a good industry-wide economic perspective to date business cycles. They use monthly economic indicators (such as employment, real personal income, manufacturing sales, and industrial production), rather than quarterly real Gross Domestic Product (GDP). The monthly data allow the NBER to be more precise in setting business cycle turning points; the monthly data also typically are not subject to the same magnitude of revisions as are the quarterly GDP data. The Business Cycle Dating Committee also examines the data to evaluate the depth of a downturn to determine whether it is sufficient to qualify as a recession.

In November 2001, the NBER announced that the U.S. economy reached a peak in March of 2001, and it designated that month as the beginning of a recession. http://www.nber.org/cycles/november2001/ Glenn D. Rudebusch's Federal Reserve Bank of San Francisco Economic Letter (2001-20; October 19, 2001) titled, "Has a Recession Already Started?" anticipated the NBER's designation of March 2001 as the beginning of the recession. The article provides a review of the process and indicators the NBER Committee uses to evaluate potential business cycle turning points.