Who are the largest holders of U.S. public debt?

As always, it is helpful to start with a definition.

What is public debt?
Public debt is the outstanding amount of money the United States government has borrowed to cover its spending. In general, the public debt grows when there is a budget deficit. The government, through the U.S. Treasury, borrows money to finance the deficit by selling Treasury securities. The government then has to pay interest to the people and organizations it borrows from, just like when businesses and consumers get a loan from their bank. Often the government runs an annual deficit, but not always; budget surpluses, as occurred from 1998 to 2001, may be used to pay back that debt, and reduce the total amount of outstanding public debt.

To gain a better understanding about which groups purchase U.S. government securities (that is, who the government is borrowing from), it is helpful to break down ownership of U.S. Treasury securities into two broad categories of debt: the amount held by the Federal Reserve and Government accounts and the amount that is privately held. For a more detailed breakdown, see Chart 1.


Debt that is held by the Federal Reserve and Government accounts.

Here’s a chart to show you what the breakdown of privately-held debt looks like. 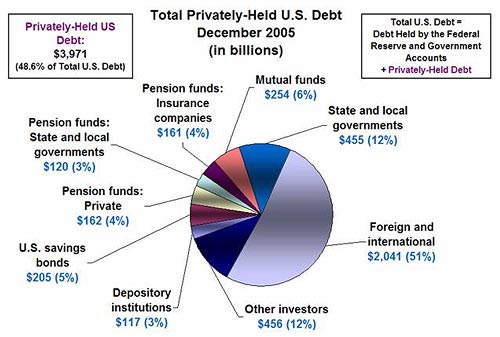 The breakdown of privately held debt indicates that as of December 2005, more than half of total privately-held U.S. Treasury securities were owned by foreign and international entities (51%), followed by state and local governments (12%).

How has the breakdown of privately held debt changed over time?

As shown in Chart 2, since 1995 the share of debt owned by foreign investors has grown from one-fifth to roughly half of total private holdings. 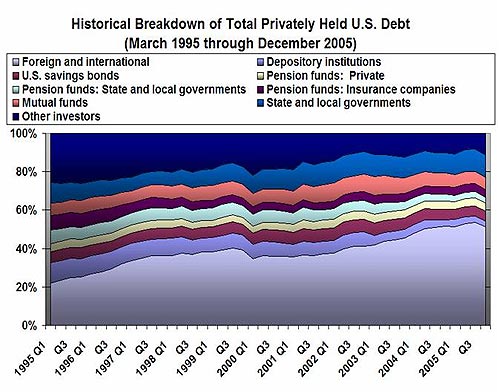 Which foreign entities are major holders of U.S. debt?

The U.S. dollar is an international reserve currency. Most of the world’s official reserves are held in U.S. dollars. 6 Also, because of its relative safety, foreign investors (both government and private) may choose to hold assets denominated in dollars, such as U.S. Treasury securities, to diversify their portfolios. Central banks or other monetary authorities (often called “official” foreign entities) may hold foreign exchange reserves—such as dollars—in order to influence the value of their domestic currency in the foreign exchange market. 7 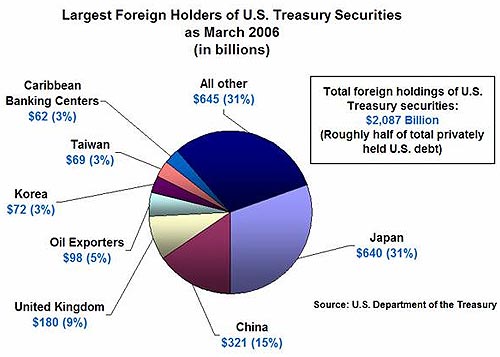 2. The Fed’s primary source of income is interest earned on the U.S. Treasury securities it holds; after covering expenses, the Fed distributes any profit back to the U.S. Treasury. For more information on the Fed’s structure, see the September 2003 Dr. Econ. Also, click here to see Reserve Bank income and expense data and transfers to the Treasury for 2005.

5. Analytical Perspectives, p. 224. Analytical Perspectives states that, “issuing debt to Government accounts does not have any of the economic effects of borrowing from the public. It is an internal transaction of the Government, made between two accounts that are both within the Government itself. It is not a current transaction of the Government with the public; it is not financed by private saving and does not compete with the private sector for available funds in the credit market; it does not provide the account with resources other than a legal claim on the U.S. Treasury, which itself obtains real resources by taxation and borrowing; and its current interest does not have to be financed by taxes or other means.” Therefore, the Office of Management and Budget states that gross debt excluding that held by Government accounts “is a better concept than gross Federal debt for analyzing the effect of the budget on the economy.”