Once the Federal Open Market Committee (FOMC) determines a new short-term interest rate, when is the new rate implemented in the market? The day of the FOMC meeting?

Changes in the discount rate are implemented quickly...

Changing the discount rate is relatively simple: Discount rates are established by each Reserve Bank’s board of directors every two weeks, subject to review and determination by the Board of Governors.2 Therefore, changes in the discount rate go into effect right away or soon thereafter. You can check the dates of discount rate changes at the following Fed website.

… while the implementation of changes in the federal funds rate is a bit trickier.

The fed funds rate chosen by the FOMC is simply a target, meaning the Federal Reserve has to buy and sell U.S. Treasury securities to achieve the target rate in the market for bank reserves. In other words, the FOMC chooses the target for the federal funds rate (in essence, the price of available bank reserves), but obtains that price by adjusting the quantity of funds available.3 For example, to lower the fed funds rate, the Fed will instruct the open market desk in New York to purchase Treasury securities on the open market, which in turn infuses money into the banking system and thus moves the effective federal funds rate or price of those reserves down.

Once the targeted fed funds rate is reached, the job isn’t done because the open market is dynamic. The amount of money people carry changes from day to day according to seasonal factors, interest rates, and changes in their income; therefore, the supply of bank reserves changes too. In this dynamic environment, the Fed continues adjusting the supply of bank reserves from the first trading day after an FOMC meeting until a change in the target federal funds rate is determined at a future FOMC meeting.

How does the Fed know what quantity of Treasury securities to buy or sell to achieve the targeted federal funds rate? The answer is through a very detailed process, implemented as follows:4

As shown in Chart 1, you can see that the effective fed funds rate generally comes quite close to its target fed funds rate through this process—you can hardly differentiate between the two lines! (You can view the data at the New York Fed’s Federal Funds Data site). 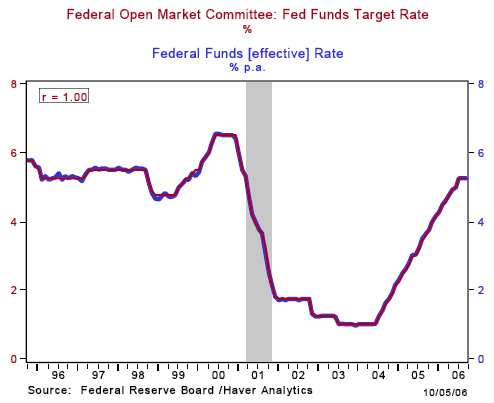 Even though the Fed can’t flip a switch to automatically change the federal funds rate, it has taken steps to immediately communicate to markets its targeted changes in the fed funds rate. The FOMC releases a statement at roughly 2:15 p.m. Eastern time following each FOMC meeting to inform the general public of its monetary policy decision, regardless of whether or not rates have been changed.

This statement has become very significant in recent years, and many view the statement itself as an additional monetary policy instrument. The wording and message contained in the statement lets the markets know what monetary policy decision was made, what factors the FOMC considered in making that decision, and what are its immediate concerns about the economy and monetary policy. The statement is very brief, but consists of several parts: the decision of the committee, the rationale for that decision, a discussion of balance of risks, a brief discussion of the future policy actions, a vote record, and the discount rate decision. (View past FOMC statements on the Board of Governors website.)

How does the release of the FOMC statement serve as an additional policy instrument? In short, it greatly enhances the Fed’s transparency, which makes monetary policy more effective and more precise. In a 2004 speech, then-Fed Governor (now Chairman) Ben Bernanke explained that transparency has this effect in three ways:

Markets watch the release of the FOMC statement very closely. San Francisco Fed President Janet Yellen stated in a 2006 speech that, since the FOMC began releasing a post-meeting statement in 1994, “financial markets have become much better at forecasting the future path of monetary policy than they were up to the late 1980s, and are more certain of their forecast ex ante as measured by implied volatilities from options contracts.”

1. Since January 2003, the discount rate has been set at a 100 basis point “penalty” rate above the federal funds target rate; however, the FOMC still reviews conditions affected by the discount rate at each meeting and the Board of Governors is responsible for approving changes in the discount rate. For more information, see the September 2004 Ask Dr. Econ response.

2. See The Federal Reserve System: Purposes and Functions for more information, especially section 3 on the implementation of monetary policy.

3. This wasn’t always the case; from the late 1970s to early 1980s, the Federal Reserve targeted the money supply itself, not the federal funds rate. For more information on the changes in the Fed’s approach to monetary policy conduct, see the January 2003 Ask Dr. Econ response.