How does inflation affect economies?

You asked a very interesting and important question for monetary policymakers.

In October 2002, I discussed the definition of inflation. Also in that response I emphasized that there are as many measures of inflation as there are measures of overall price levels. Three popular measures of overall consumer prices are the consumer price index (CPI) published by the U.S. Bureau of Labor Statistics, the personal consumption expenditure (PCE) deflator published by the U.S. Bureau of Economic Analysis, and GDP deflator (published by the Bureau of Economic Analysis). Figure 1 shows that these inflation series (quarterly; year-over-year percent change; seasonally adjusted) tend to follow similar paths. 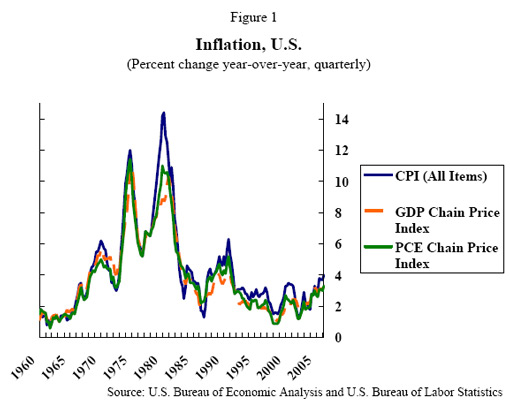 Finally, note that economists often focus on core inflation (which excludes volatile energy and food prices) rather than overall inflation. To read more about core inflation, please refer to my October 2004 response.

When trying to understand the debate about inflation or interpret an inflation number reported in the press, it is important to be clear on which measure of inflation is under consideration to avoid confusion. That said, one thing about inflation that is clear is how important it is to monetary policymakers.

Central banks around the world view stable and low inflation as a very important goal. Below are some concrete examples (italics added for emphasis):

U.S. Federal Reserve System: “Monetary policy has two basic goals: to promote "maximum" sustainable output and employment and to promote ‘stable’ prices. These goals are prescribed in a 1977 amendment to the Federal Reserve Act.“

NOTE: On January 25, 2012, the Federal Open Market Committee issued a "Statement of Longer-Term Goals and Policy Strategy." One of important announced in the statement was a 2 percent numerical inflation target for the overall personal consumption expenditures price index. Key points from the statement are:

European Central Bank: “To maintain price stability is the primary objective of the Eurosystem and of the single monetary policy for which it is responsible. This is laid down in the Treaty establishing the European Community, Article 105 (1).”

Bank of Canada: “The goal of Canadian monetary policy is to contribute to rising living standards for all Canadians through low and stable inflation.”

Policymakers and economists are not the only groups concerned with inflation and its consequences. The general public has a great distaste for inflation too. It has been noted that news about inflation can damage approval ratings of presidents and affect outcomes of elections. A look at public opinion polls reveals that inflation at times can be viewed as the most important national problem (Shiller 1996).

Although I have given you all this evidence that many groups view inflation as a serious problem, I have not begun to discuss why. It is interesting to note that while both economists and non-economists tend to dislike inflation, they dislike it for different reasons. Non-economists would most likely argue that inflation erodes their purchasing power. In an international survey conducted in the 1990s by a prominent Yale economist Robert Shiller, other concerns with inflation expressed by non-economists were centered around issues of exploitation, political instability, loss of morale, and damage to national prestige (Shiller 1996).

How Large Are These Costs?

It is natural to wonder which of the cited costs of inflation is the largest or most important. The answer to this question truly depends on the time period considered, the country under consideration, and the severity of inflation or deflation (for instance, it matters whether it is moderate, high, or hyperinflation).

Though it is hard to quantify the costs of price volatility, it is a critical issue, especially for a central bank. What may surprise some people is that, although inflation is costly, policymakers generally do not wish for zero inflation. This is because reducing inflation from some low positive rate to zero might come at the expense of higher unemployment (and lower output). Thus, the costs of going from low to zero inflation are thought to exceed the benefits. This is further complicated by the difficulty of measuring inflation precisely enough to be certain exactly how close you are to zero inflation. Of course, that is why economists keep a close eye on several measures of inflation!

English, William. 1996. “Inflation and Financial Sector Size.” Board of Governors of the Federal Reserve System, Finance and Economics Discussion Series. 96-1.

Example 1 – Shoe-leather costs of inflation
The intuition behind the shoe-leather cost of inflation is that during times of high inflation, households make smaller cash withdrawals with higher frequency. That is, instead of withdrawing $200 once a week, they might withdraw $50 four times a week, thereby, “protecting” their assets from inflation by keeping them in an interest-bearing account longer.

Example 2 – Increase in relative price volatility
Suppose firm X produces one good and changes its price once a year (menu costs prevent this firm from changing its prices more often). In the case of no inflation in the economy (that is, the case when prices of other goods and services do not change), then the relative price of firm X’s good is constant throughout the year. Suppose, however, that inflation is 0.5% per month. In this case, prices of other goods and services increase by 0.5% every month, while the price of the good produced by firm X remains constant. Thus, the good produced by this firm becomes increasingly cheaper relative to other goods. In this scenario, sales of firm X might be relatively low at the beginning of the year (when the price of its good is relatively high) and increase towards the end of the year (as the relative price of its good falls). Economists believe that inefficiencies in resource allocation will result from this scenario.

Example 3 – Tax distortions
Suppose that you bought some asset for $100 in period 1 and sold it for $110 in period 2. You made a profit of $10 (10%). You have a nominal gain of $10, but whether you made a gain in real terms or not depends on inflation. If there is no inflation between periods 1 and 2, then your real gain is 10%. You can buy 10% more goods and services with $110 in period 2 than you could with $100 in period 1. Now suppose that inflation between periods 1 and 2 was 10%. In this case, you can buy as many goods and services with $110 in period 2 as you could with $100 in period 1—you made no real gains. Yet, regardless of whether you made any real gains or not, you may still have to pay taxes on the nominal gain.

Example 4 – Redistribution of wealth from lenders to borrowers
Suppose that you lend someone $100 at an interest rate of 10% for one year. Suppose also that both you and the person you are lending to expect inflation to be 3% per year, but that in reality inflation ends up being 10% per year. Regardless of the inflation rate, your nominal gain and the borrower’s nominal cost is $10. However, because of unexpectedly high inflation, you received less in real terms than anticipated (because prices of goods and services rose faster than you expected, you can buy less with your $110 than you could otherwise). On the other hand, the borrower paid you less than expected in real terms (thus giving up less in terms of goods and services than they thought they would at a time of entering into this agreement with you). Thus, you (the lender) suffered an unexpected real loss, while the borrower made an unexpected real gain.