Where does the Federal Reserve get the money to fund its operations?

First, you should know that the Federal Reserve System was created by Congress to be self-financed and therefore is not subject to the congressional budgetary process. In this way, the Fed is considered to be “independent within government.”

Second, the quick answer to your question about how the Fed is funded can be found on the Board of Governors of the Federal Reserve System’s website:

The Federal Reserve's income is derived primarily from the interest on U.S. government securities that it has acquired through open market operations. Other sources of income are the interest on foreign currency investments held by the System; fees received for services provided to depository institutions, such as check clearing, funds transfers, and automated clearinghouse operations; and interest on loans to depository institutions (the rate on which is the so-called discount rate). After paying its expenses, the Federal Reserve turns the rest of its earnings over to the U.S. Treasury.

For a short description of the Federal Reserve System’s annual revenues and expenditures, you should check out the Board’s annual press release, usually released in January. It provides a brief description of the prior year's Reserve Bank income and expense data and transfers to the Treasury. The press release of January 10, 2006, providing information for 2005 is shown below:

Federal Reserve System income is derived primarily from interest earned on U.S. government securities that the Federal Reserve has acquired through open market operations. This income amounted to $28.959 billion in 2005. Additionally, income from fees for the provision of priced services to depository institutions totaled $901 million. The remaining income of $386 million includes earnings on foreign currencies, earnings from loans, and other income.

Total net income for the Federal Reserve Banks in 2005 amounted to $23.521 billion. Under the Board's policy, each Reserve Bank's net income after the statutory dividends of $781 million to member banks and the $1.286 billion necessary to equate surplus to paid-in capital is transferred to the U.S. Treasury.

Here’s a chart to give you a visual representation of the information in the press release: 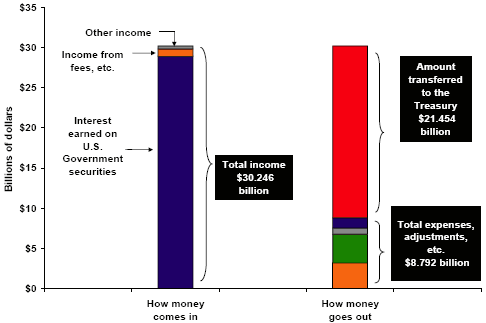