How does the slowdown in the housing market affect the construction sector and other housing-dependent industries?

I first answered this question in my December 2006 posting by analyzing the housing market’s recent slowdown through monthly payroll employment data.  Let’s look at this question again, this time analyzing the effect of housing on the economy by discussing the link between housing and the broadest measure of economic activity, gross domestic product (GDP). We will examine the quarterly real (inflation-adjusted) GDP data published by the Bureau of Economic Analysis (BEA) for much of this analysis. You may recall that GDP can be decomposed into four broad categories: consumption, investment, government spending, and net exports (the difference between exports and imports)—let’s look at the direct and indirect effects of the housing slowdown on some of these categories of GDP.

Remember that investment spending typically requires financing and therefore is normally sensitive to interest rates. The same also is true for the residential housing market, where higher interest rates may lead to weak housing sales, rising inventories of homes for sale, and falling housing prices. These, in turn, make building houses less profitable, and so builders are likely to construct fewer new houses, creating an overall reduction in real residential investment.

There are two ways to observe how housing directly affects GDP. First, new housing construction is included in the investment category of total economic spending. On average over the past ten years, new residential housing investment has accounted for about 4.8% of real GDP. However, this proportion varies from period to period because this type of investment, like the investment category as a whole, typically varies much more widely over the business cycle (periods of recession and expansion) than overall GDP. The wider cyclical swings in residential investment are shown in Chart 1, which compares real GDP (thin blue line) and real private residential investment (thick red line) over the past 40 years.  Recessions, as defined by the National Bureau of Economic Research (NBER), are shown as the gray bars in the chart. 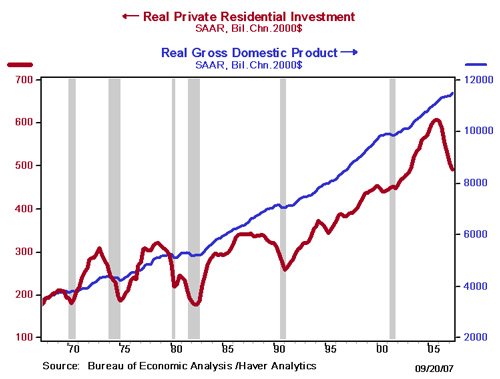 Chart 2:  The recent housing slowdown has caused a drag on GDP growth 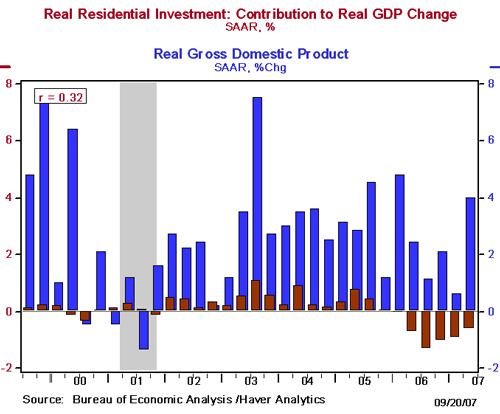 Housing also might indirectly affect GDP via consumption spending. When we think about the health of the housing market, it is important to remember that the houses that individuals and families own are a major asset on their balance sheets. It has been noted that changes in housing prices are correlated with changes in consumption in a number of developed countries (Disney et al. 2007, Case et al. 2005).  Some have argued that changes in housing prices significantly affect consumption either via the wealth effect (for example, when house prices rise/fall households may feel more/less wealthy and react by increasing/reducing their consumption) or via collateral effects (that is, an increase in the value of a house might allow the owner access to more credit; the opposite might occur when house values fall).

This link between the health of the housing market and consumption is important, because consumer spending accounts for over 70% of U.S. economic output (which is also true for many developed nations). Thus, even a small drop in consumption might have a profound impact on overall GDP growth.  Amidst the recent housing slowdown, many economists and policymakers have been concerned about a potential negative wealth effect causing a drag on economic growth (see, for example, a speech by Janet Yellen, President and CEO of the Federal Reserve Bank of San Francisco of April 18, 2007).

How has the recent housing slowdown affected the U.S. economy?  At least as of June 2007, while the sharp slowdown in the residential housing sector has dampened economic growth for the past five quarters, the economy outside of housing remains strong.  That said, the housing market softness clearly has had an impact on investment spending for residential housing as well as for employment in residential construction and other sectors that tend to be dependent on the construction sector. Meanwhile, economists continue to watch for a potential negative wealth effect driven by a slowing housing market and for evidence that the weakness in the housing market is spreading beyond construction-dependent sectors to the overall economy.