How is unemployment measured and what are different types of unemployment? Also, what are the economic disadvantages associated with high employment?

The U.S. Bureau of Labor Statistics or BLS compiles data on the employment status of the population.  These data come from the Current Population Survey (CPS), conducted for the BLS by the U.S. Census Bureau.  The CPS is a monthly survey of about 50,000 households and it has been conducted for over 50 years (to learn more about the CPS, visit the U.S. Census Bureau’s web page).  In my June 2004 answer, I discussed the employment data that come from the survey (“civilian employment” series).  Today I will focus on unemployment.

To be classified as unemployed in the CPS people must satisfy two primary criteria: (i) they must have no job and (ii) they must be actively seeking employment.  Those who do not have jobs and are not actively searching are considered to be out of the labor force.

To be precise, the BLS defines unemployed persons as those who “had no employment during the reference week, were available for work, except for temporary illness, and had made specific efforts to find employment sometime during the four-week period ending with the reference week.”   There is one exception to this rule: “persons who were waiting to be recalled to a job from which they had been laid off need not have been looking for work to be classified as unemployed.”1

Chart 1 below shows civilian unemployment for the 1990s and 2000s.  As one would expect, the number of unemployed increases during and after the recessions (designated with gray bars). 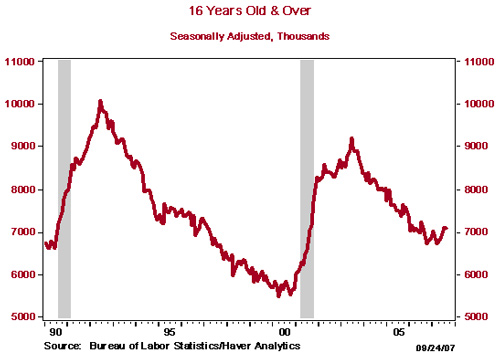 Note that the group classified as out of the labor force is not limited to people who don’t desire employment.  Indeed, it includes people who do not have jobs and are interested in finding work (as signaled by the fact that they have looked for work sometime in the past year), but gave up looking because they do not believe that there are jobs available.  Such people are classified in the survey as discouraged workers.  While it is true that discouraged workers are in a situation similar to the unemployed, this group typically is quite small in relative terms and exhibits a cyclical pattern similar to the unemployed.  As such, including discouraged workers in an expanded measure of unemployment does not significantly alter the evaluation of changes in labor market conditions over time (Kodrzycki 2000). 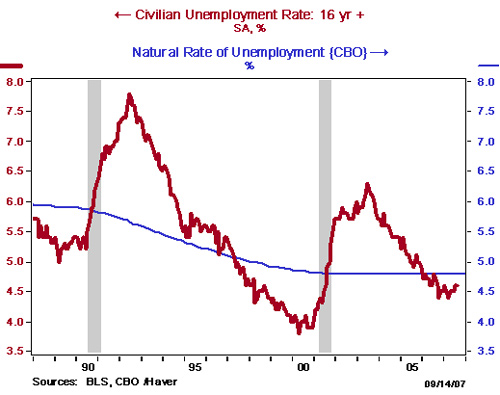 When the actual unemployment rate dips below the estimated natural rate, labor markets typically are described as “tight.”  When the opposite occurs, you might start hearing about a “softer” labor market, or a labor market that has “slack.”  Of course, the comparison of the actual and natural rates of unemployment is complicated by the fact that the latter is only an estimate of a theoretical concept, not a number that one can explicitly measure, and considerable uncertainty surrounds that estimate.

Chart 3: Natural Rates of Unemployment in the U.S. and Other Select Areas 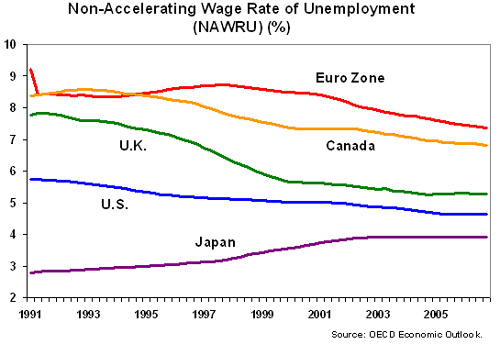 One might question why economies experience unemployment at all and why, even in the most developed and prosperous economies, unemployment always exists.  Part of the answer is that it takes time for workers to find new jobs.  Thus, even if a job that matches a person’s skills and preferences exists, it may take some time for the person to discover that job.  The type of unemployment that exists because a job search takes time is sometimes referred to as frictional unemployment.  In contrast, structural unemployment refers to a persistent mismatch between labor supply and demand, arising, for example, from a shortfall of skilled workers relative to available jobs or unbalanced growth in labor demand across regions or industries.

When can high employment be problematic?

Finally, you asked what can be bad about high employment.  Most people are aware that high unemployment is not desirable.  As Federal Reserve Governor Mishkin said in a 2007 speech, high unemployment “is associated with human misery, including lower living standards and increases in poverty as well as social pathologies such as loss of self-esteem, a higher incidence of divorce, increased rates of violent crime, and even suicide.”  In addition to these social costs, unemployment clearly causes economic problems for the unemployed.  On a macroeconomic level, high unemployment implies that the economy isn’t utilizing its resources and, therefore, is performing below its potential.  High unemployment also costs the government money in terms of increased expenditures on social insurance programs and reduced tax receipts.

Given the above, shouldn’t policymakers try to push the unemployment rate as low as possible?  Not quite: pushing unemployment far below its natural rate would also lead to negative consequences, primary among them inflationary pressures.  The reason is that the maximum level of employment in the economy that is sustainable (some refer to it as the long-run employment level) depends not on monetary policy, but on the fundamental structure of the economy:  demographics, characteristics of the labor force, technology, natural resources, etc.  If employment is pushed above this maximum sustainable level, wages will eventually rise as people realize jobs are abundant and thus they have some bargaining power.  As wages rise, production costs increase, which could then be passed along to consumers and hence the rate of price inflation rises. Price inflation has considerable costs, too (see my March 2006 posting that discusses the costs of inflation).

As a side note, while monetary policymakers cannot keep unemployment below the natural rate indefinitely without negative consequences, other policymakers can influence the structure of the economy by pursuing policies that enhance education and productivity, thereby increasing the maximum sustainable level of employment itself, though this is notoriously difficult to do.

2. The total labor force is the sum of all persons employed and unemployed.