Is the dramatic increase in the national unemployment rate spread equally across demographic groups or have some been hit harder than others?

The aggregate unemployment rate provides important information to policymakers. In fact, I discussed the rise in the national unemployment rate in a recent (January 2010) response. However, information on changes in the unemployment rates among different sub-groups is also important and can aid in the understanding of the movements of the overall unemployment rate. Researchers and policymakers realize this and, in addition to looking at aggregate labor market indicators, they examine various disaggregated statistics - for instance, by demographic characteristics, region or industry. In this response I will focus on unemployment rates by demographic groups and show that the recent ‘Great Recession,’ as it has been called by some, has had a broad-based impact on virtually all segments of the labor market. Yet, the data also make it clear that some groups have been impacted more than others.

Where can I find disaggregate labor market data?

The Bureau of Labor Statistics (BLS) provides detailed labor market data. In terms of demographic characteristics of the labor force, data disaggregated by age, gender, race and educational attainment are readily available (although data for some sub-groups goes further back than for others).

Who is most affected by the labor market downturn?

Let’s begin by looking at unemployment rates by gender. Chart 1 shows the gender-specific unemployment rates for the post- World War II period (in this and all charts, gray bars indicate recessions as defined by the National Bureau of Economic Research 1). As is evident from the chart, this recession is marked by a large difference in unemployment rates, with the rate for men exceeding that for women. 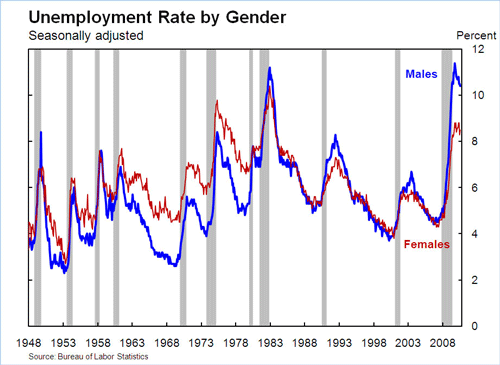 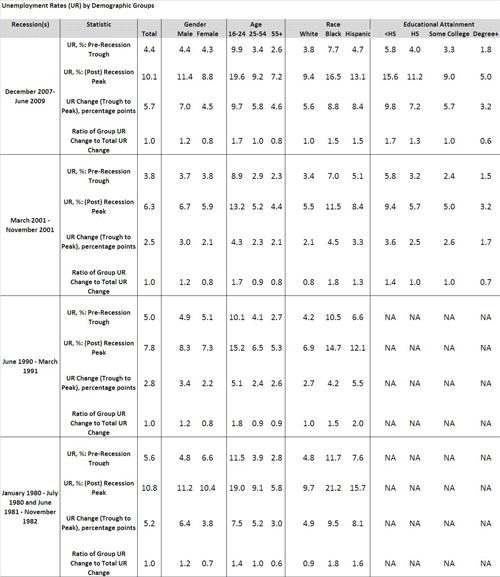 The difference between male and female unemployment rates was particularly large during the 2007-2009 downturn. Researchers attribute the large increase in the difference in gender unemployment rates to two factors (Sahin et. al 2010). First is industry segregation: men tend to be employed in industries that are more sensitive to business cycle swings, such as manufacturing and construction, and therefore men suffered larger job losses than women. This factor also contributed to the greater sensitivity of the unemployment rate for males in other recessions. The second factor is an increase in the share of men who joined the labor force but were not able to find a job in the recent cycle. That is, some men who were not in the labor force (for definitions and details on how unemployment rate is measured please consult my May 2007 response) were prompted by the weak economy to begin a job search. During the most recent three recessions, the flow of workers from non-participation to unemployment always increased, and the size of this increase was roughly comparable for men and women (see Fraciz and Ilg 2009). However, the particular feature of this recession is that men experienced a much steeper increase in flow from non-participation to unemployment than women. It is hypothesized that declines in wealth and liquidity drove some non-participants in the labor market (retirees and students) to look for work (see Daly, Kwok and Hobijn 2009). 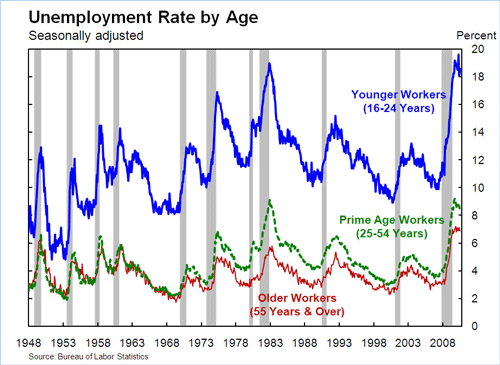 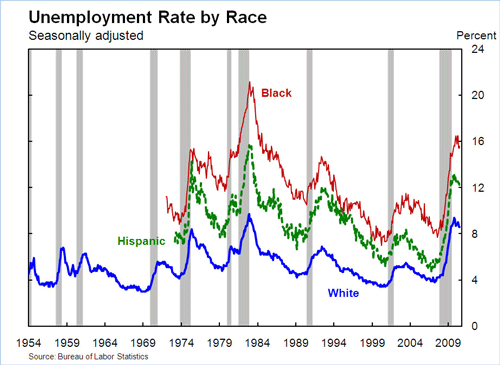 Ethnic minorities tend to experience more pronounced increases in joblessness during downturns. Declines in demand during economic downturns typically have a larger impact on the employment prospects of less-skilled workers (and this will also be evident from my discussion of unemployment rate by education attainment that follows). On average, black and Hispanic workers have less education and job skills than whites (Carpenter and Rodgers 2004). As is shown in Table 1, the peak-to-trough unemployment rate increase for black and Hispanic workers was greater than that of whites during all of the recessions shown. Table 1 indicates that black and Hispanic workers bore a disproportionately higher share of unemployment rate increases during this recession. However, by this metric, their burden was even higher during the two recessions of the early 1980s. 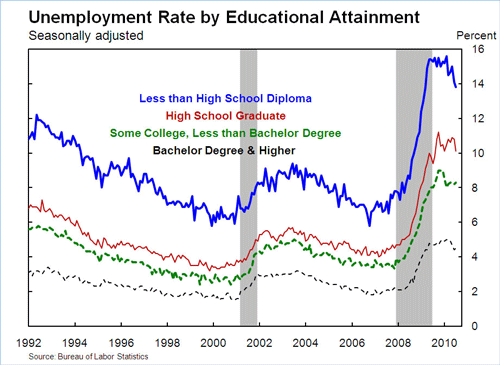 By all measures, in 2009 and 2010 the labor market is operating at its worst since the Great Depression. Job growth, unemployment rates, unemployment spells, and many other measures are at historic highs (or lows) across the board. However, as badly as the overall labor market is performing, some segments of the labor force are facing even harder times: males, younger workers, the less educated, and those from ethnic minorities.

For more information on the financial crisis, the Fed’s monetary policy response, and the recovery, please see the Federal Reserve Bank of San Francisco website, The Economy: Crisis & Response.

For more reading on the labor market, see:

Maloney, Carolyn B. 2010. Understanding the Economy: Unemployment Among Young Workers. A report by the U.N. Congress Joint Economic Committee.

Sahin, Aysegul, Song, Joseph, and Hobijn, Bart. 2010. The Unemployment Gender Gap during the 2007 Recession,Current Issues in Economics and Finance, Vol. 16, No. 2.