Why is the unemployment rate so high, and does it fully capture labor market weakness?

As you have probably noticed, the United States’ job market remains very weak even though most economists agree that the longest and deepest recession in more than six decades has likely come to an end.  Although it is common for declines in the unemployment rate to lag behind economic recoveries, today’s labor market has been especially challenging. Let’s look at why the unemployment rate is so high and how that has broader implications for workers and the economy. 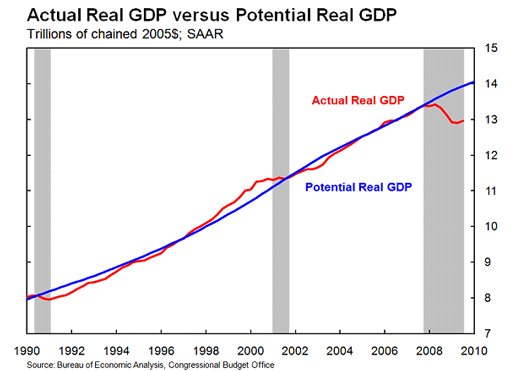 There is considerable slack in the economy

For the actual output measure, economists use real (inflation-adjusted) gross domestic product (GDP), which is calculated by the Bureau of Economic Analysis (BEA).  Economists frequently compare actual output to a benchmark called "potential output."  Potential output is an estimate of the level of real GDP that is achieved when the resources (labor and capital) are used to capacity.  Potential output is not a measure of maximum output that can be achieved, but instead maximum sustainable output.  As such, it is the level of real GDP that is consistent with stable inflation.  When actual real GDP is running higher than potential GDP, the economy is said to be producing above full capacity. The opposite is true when actual GDP is lower. One commonly used estimate of potential GDP is provided by the Congressional Budget Office.1 Chart 1 shows actual and potential real GDP and the wide gap that exists between the two in 2010.  In this and following charts, recessions are designated with grey bars.2

As a result of the recession that started in December 2007, actual GDP is much lower than potential GDP, so we can say that there is significant "slack" in the economy. More precisely, economic output is far below what it would be under full resource utilization, meaning there is considerable unemployment of labor and underutilization of plant and equipment capacity.  To put the current gap between actual and potential output into perspective, it helps to compare (both are shown in Chart 1) the current recession with the previous one in 2001, when there was essentially no negative gap until after the recession had ended.

Businesses laid off workers during the recession amid weakening demand for goods and services. (For a more detailed discussion of the financial crisis and the Federal Reserve’s monetary policy responses, please link to the Federal Reserve Bank of San Francisco website: The Economy: Crisis & Response. 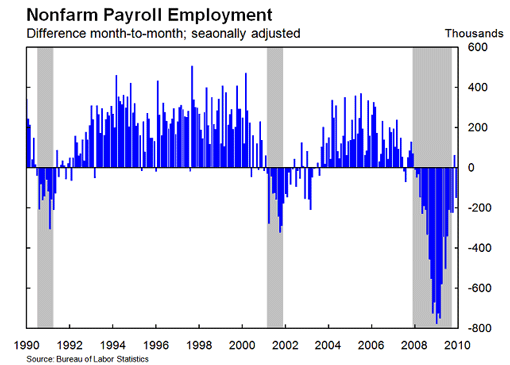 We use data generated by the Bureau of Labor Statistics (BLS) to analyze the extent of job losses. The Bureau's estimate of the number of jobs in the economy is measured by a payroll employment survey.3 Chart 2 above shows us the number of jobs gained or lost during a particular month. During the recent recession, which began in December 2007, more than 8.4 million4 jobs have been lost through January 2010. Monthly job reports have shown losses of 779,000 jobs (in January 2009) to gains of 64,000 (in November 2009). The average monthly job loss has been about 337,000. The U.S. economy normally needs to add at least 100,000 jobs each month just to maintain a steady unemployment rate. So even if no more jobs are lost in future months, the unemployment rate will rise if job gains are insufficient; with such large job losses, the rate has risen sharply. 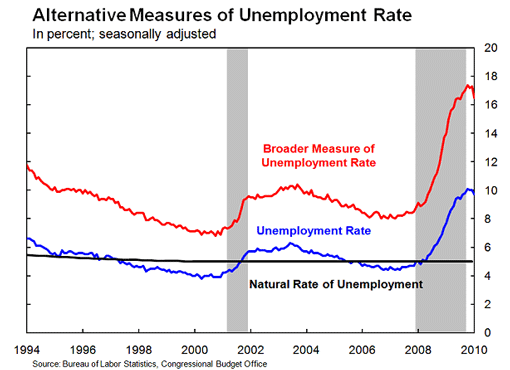 The blue line shows the unemployment rate, which measures the share of persons who do not have a job but are willing, able, and actively seeking one (the "unemployed") as a percentage of the total persons who of are willing and able to work, regardless of their employment status (the "labor force"). This figure is estimated by the BLS and is the most commonly cited measure of the unemployment rate. The series in black, called the "natural rate" of unemployment5, is an estimate released by the CBO that illustrates what the unemployment rate would be with an economy performing at full capacity; it is related to the "potential GDP" measure discussed above. This measure is frequently used as a benchmark to compare with the actual unemployment rate.

Although the most commonly cited measure of the unemployment rate alone is indicative of a very weak labor market, broader measures of labor market conditions reveal an even more challenging landscape for job seekers and workers.  The BLS computes an alternative, broader measure of unemployment that is illustrated by the red series in Chart 3. This broader measure reflects more general forms of "underemployment" by including discouraged workers6, marginally attached workers7, and involuntary part-time workers7.

This alternative measure is worth examining because it covers workers affected by weakness in the labor market who do not fit into the narrower definition of "unemployed." As indicated in Chart 4, which displays the gap between the broader and narrower measures, the behavior of this measure has been especially striking during the recession that started in December 2007: 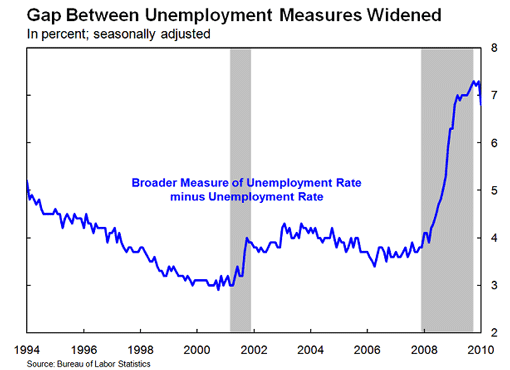 Here we see that even as the unemployment rate has climbed to its highest level in more than two-and-a-half decades, the broader underemployment measure has been rising at an even faster rate. This means that more potential labor force participants are falling into alternative categories of labor hardship, including discouraged, marginally attached, or involuntary part-time workers. This broader measure shows weakness in the labor markets is much more extensive than the narrower unemployment rate suggests.

One possible explanation for why there is an increasing share of potential workers who are falling outside the most commonly used definition of unemployed is because the duration of unemployment spells is increasing (on average, it takes longer to find a job). As a result, workers may stop looking for work or accept part-time employment involuntarily because they cannot find a full-time position. Chart 5 provides some evidence in favor of this: 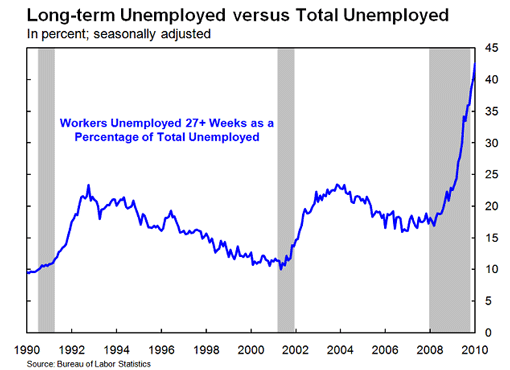 Chart 5 shows that the share of workers who have been unemployed for an extended period - six months or more - has risen sharply since the recession started.  Unemployed people out of work for 27 weeks or longer accounted for more than 42 percent of the total unemployed workers as of January 2010, far above the 20-to-25 percent peaks for this measure after the 1991 and 2001 recessions. This is the highest this share of the unemployed has been since these data became available in 1948.

As U.S. economic activity and output dropped far below full capacity, and employers shed large numbers of jobs, the unemployment rate climbed to more than twice the corresponding natural (full capacity) rate of unemployment. Moreover, because it now takes longer to find a job, a large and growing portion of workers either have ceased looking for work or accepted part-time jobs instead of the full-time jobs that they prefer; these individuals are not counted in the official unemployment rate. Thus, measuring the unemployment rate using the traditional definition of unemployed (someone who does not have a job but is actively seeking one) understates the current extent of weakness in the labor market in 2010.

For more information on the financial crisis, the Fed’s monetary policy response, and the recovery, please see the Federal Reserve Bank of San Francisco website, The Economy: Crisis & Response (http://sffed-education.org).

Dr Econ. "How is unemployment measured and what are different types of unemployment?  Also, what are the economic disadvantages associated with high employment?" FRBSF. May, 2007.

For more reading on the labor market, see:

2. Please keep in mind that at the time this response is written (January 2010), the National Bureau for Economic Research has not yet determined the end date of the recession.  Thus, on the charts shown in this response the period from December 2007 to January 2010 is shown as a recession period.  However, the performance of many economic indicators during the second half of 2009 prompted many analysts and policymakers to suggest that the economy has emerged from recession.  Thus, it is possible that the end of the recession, when officially called by the NBER, will be earlier than implied in the charts presented here.  To read more about the NBER process for determining dating recessions, please refer to my January 2008 posting.

3. See Dr Econ. "How is unemployment measured and what are different types of unemployment?  Also, what are the economic disadvantages associated with high employment?" FRBSF. May, 2007.

4. Economists typically exclude payroll employment data from the agriculture sector for labor market analysis because of the high seasonal variability that is a structural element of that sector.

5. Frequently, the natural rate of unemployment is also referred to as The Non-Accelerating Inflation Rate of Unemployment or NAIRU. To read more about NAIRU and its usefulness to monetary policy, please refer to Judd 1997. Although the two terms are frequently used as synonyms, they are not exactly the same and some economists caution that it is important to distinguish between the two (for more details see Walsh 1998).

6. Defined as those who are currently not working and are willing and able to work but are no longer looking for work because of labor market reasons.

7. Defined as discouraged workers plus others who are not working and are willing and able to work but who are not actively seeking work although they have done so recently.

8. Defined as those who are working part time but who want and are available for full-time work.