Is the Fed still in the business of processing checks?

As the central bank for the United States, Congress has given the Fed an important role in the nation’s payment system.1 Processing and clearing checks  has long been a key part of the operating side of Federal Reserve Bank business activities – along with coin and currency services and electronic funds transfers. The Fed has had a commanding presence in commercial check processing or clearing – the delivery of a check between paying and receiving banks – maintaining in the range of 30 to 40 percent of the market share in recent decades.2 As the Treasury’s bank the Fed also has a large share of the government check processing business as well. This analysis will focus on the commercial check business as opposed to government check processing.

Legislation, technology, and competition have had an important impact on all check processers, including the operations of Federal Reserve Banks:

Under Check 21, bank customers may still write paper checks, but those paper checks are converted to electronic check images that meet the X9 Financial Industry Standards that govern the collection process for check images and that have the same legal equivalence of the original check. From a business perspective, a key feature of the Act was making a check image an equivalent legal document to the cancelled check. Rather than the paper check being the only ‘official’ document, the banks can "capture a picture of the front and back of the check along with the associated payment information and transmit this information electronically."

In contrast, in the pre-Check 21 environment, the Fed had to transport many paper checks around the country by air or truck for presentment and payment. However, in the days immediately after 9/11, with the nation’s air transportation system shut down, the check clearing system also ground to a halt.4 That tragic event and its impact on the paper check business sped up the end of paper check processing system.

Not only are paper checks being converted to electronic images, but businesses and households also are writing fewer checks to pay for purchases of goods and services.5 6 Fed payments system studies nationally indicate that total checks processed fell from about 50 billion in 1995 to about 37 billion in 2003, a sharp decline.7 Figure 1 shows how over the period from 1989 to 2011 the level of Federal Reserve check processing activity has changed. The figure indicates a clear downward trend in the number of commercial checks processed by the Fed through 2011. Commercial check volume (black line) has fallen steadily for more than 10 consecutive years. The total dollar value of commercial checks processed (red line) by the Fed also has declined, although not as much as the number of checks.8

Figure 1. History of Commercial Checks Collected through
the Federal Reserve, 1989-2011 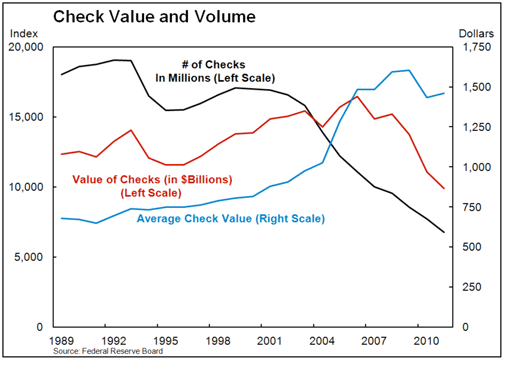 One key reason for the decline in check writing is the public’s rapid adoption of new and convenient payments service technologies. Today’s payment technologies allow households and businesses to pay by cash, checks, automated payments through automated clearinghouse (ACH) payments networks9, debit cards, credit cards, and prepaid cards. Figure 2 looks at the long-term trend in the number of non-cash payments for selected years and shows the number of transactions by type, including checks. From this chart, it is clear that the total number (and the share) of check payments to total payments fell from 1995 to 2006.

Figure 2. Number of check payments has fallen
as total payments have grown 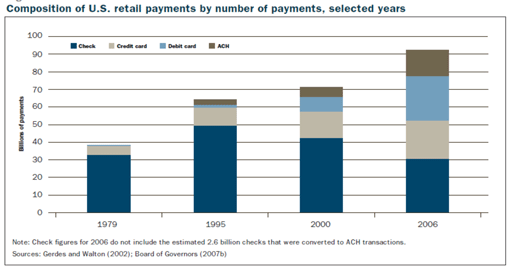 Figure 3. Shares of noncash payments changed rapidly, over just the 3-year period from 2006 to 2009.

With passage of the Monetary Control Act of 1980, Congress required the Federal Reserve Banks to charge fees for payments services (including checks, automated clearinghouse transfers, wire transfers, coin and currency, settlement and safekeeping) that are priced to recover the Fed’s cost of providing those services (including direct and indirect costs, overhead, imputed taxes, and imputed returns to capital).10 The Act was designed to increase competition between the Fed and private sector service providers. For information on current Fed Check Service fees, revenues, and expenses, please see the Federal Reserve Board’s website: Policies: Fees Schedules for Federal Reserve Bank Payment Services.

A major impact on the Fed’s check processing volume

With the public rapidly adopting new payment technologies, writing fewer checks, and with increased competition for the remaining share of the check processing business, there has been a large impact on the Fed’s volume of check processing, as was shown earlier in Figure 1. In the early 1990’s the Federal Reserve’s commercial paper check volume peaked at just over 19 billion checks a year.13 By 2001, paper commercial check volume had tapered off to 16.9 billion items (total value of $14.9 trillion). Ten years later, in 2011, the Fed processed only 6.8 billion commercial checks (nearly all electronic images) with a total value of $9.9 trillion). While checks may not go away, after all cash is still frequently used for many types of transactions, when and where check volume might stabilize remains uncertain.14

The sharp decline in the Fed’s check volume resulted in important changes in Federal Reserve check operations. In 2002, checks were processed at forty-five Federal Reserve check processing centers located around the country. These regional check processing centers collected and presented checks for payment, which often including sending checks to offices elsewhere in the nation where the checks could be presented to out-of-town banks for payment. As was noted earlier, an expensive feature of check processing in the pre-Check 21 era was that it was a relatively costly and slow physical process to transport paper checks around the country for processing, even by commercial air transport.

As Check 21 was implemented and more banks began converting to electronic images, the Federal Reserve System implemented a major consolidation in its check operations. By 2007, only 22 of the Fed’s check processing centers were still in operation and they accounted for about 15 percent of the Fed’s 21,000 employees, still leaving "checks" as one of the largest "business lines" at the Fed.15 By 2010, only two Federal Reserve facilities continued to process checks, all of the other 43 check processing centers had ceased operations. In 2012, all the electronic check images for the Federal Reserve System are processed and cleared by the Atlanta Fed, and the remaining relatively few paper checks are processed by the Cleveland Fed. More importantly, from an efficiency standpoint, the Fed’s 2012 effective average fee per item is just a small fraction of the cost of processing a paper check a decade ago, and an even smaller fraction of the cost of processing a paper check today, as the very low and declining volume of paper checks has driven up the cost per item.16

Bottom line, the Fed remains a key player in the check business, but the check processing business has changed dramatically. Today electronic check images are processed, rather than paper checks. And fewer checks are ‘written’ today as many business and consumer payments are made with newer and more convenient payment technologies.

Payments System: Check Services: Commercial Checks Collected through the Federal Reserve  -- Annual Data (The daily average volume and average daily value of items are based on the number of business days in each year.) Board of Governors of the Federal Reserve System website.

Quinn, Stephen and William Roberds. 2008. "The Evolution of the Check as a Means of Payment: A Historical Survey." Economic Review, Federal Reserve Bank of Atlanta, Volume 93, Number 4, 2008.

1. Soon after it was created by Congress in 1913 the Federal Reserve set up the Bank and Branch infrastructure for a nationwide check clearing system using the available communications and transportation infrastructure of the period and the Fed became an important participant in the processing of paper checks. The Fed was able to provide a national clearing system, an option that was not possible for commercial bank operating under restricted bank and branching legislation in force at the time, and went on to become the nation’s single largest check processor. 

8. Over the same 10-year period, the average check size (blue line in Figure 1) has approximately doubled, rising from an average of $879 in 2001 to $1,460 in 2011, as many smaller-value payments are transacted with debit cards or have been automated and are paid via the automated clearing house transactions. See Check Services (2011) from the Federal Reserve website.

10. See Zimmerman. 1981. "The Pricing of Federal Reserve Services under MCA." The Monetary Control Act of 1980 (MCA) required the Fed to price services at cost plus a "private sector" adjustment factor that included the imputed taxes and capital costs that private processors would face. See pages 22 and 25 for additional information.

11. "Check 21 Six Years Later." 2010. 12L Times, Federal Reserve Bank of San Francisco, Issue 4, 2010. The article notes that when Check 21 took effect in 2004, "…the Fed was one of the first providers to offer check images services." Six years later, the Fed is, "…facing increased competition from the very large national banks. When virtually all checks are captured digitally versus in paper form, it’s cheap to move items between banks." The article notes that this is especially true with consortiums of large banks. Page 1.