Four decades ago, Milton Friedman recommended that central banks like the Federal Reserve pay interest to depository institutions on the reserves they are required to hold against their deposit liabilities. This proposal was intended to improve monetary policy by making it easier to hit short-term interest rate targets. However, the Fed didn’t have the authority to pay this kind of interest until 2008.

In the United States, paying interest on reserve balances was designed to broaden the scope of the Fed’s lending programs to address conditions in credit markets while maintaining the federal funds rate close to the target established by the Federal Open Market Committee (FOMC), the Fed’s monetary policy decisionmakers.

Interest on reserves adopted by the U.S. Congress in 2006

Before the crisis, Congress passed the Financial Services Regulatory Relief Act of 2006 authorizing the Federal Reserve to begin paying interest on reserves held against certain types of deposit liabilities. The legislation was supposed to go into effect beginning October 1, 2011. However, during the financial crisis, the effective date was moved up by three years through the Emergency Economic Stabilization Act of 2008.4 This was important for monetary policy because the Federal Reserve’s various liquidity facilities5 initiated during the financial crisis caused upward pressure on excess reserves and placed downward pressure on the Federal funds rate. To counteract these pressures, on October 6, 2008, the Federal Reserve Board announced that it would begin paying interest on depository institutions’ reserve balances.6

In the rest of this response, I will focus on the details of these interest rate payments and discuss why they were implemented.

Required and excess reserves before and after the crisis

Under the 2006 Act, Federal Reserve Banks were directed to

In 2007, required reserves averaged $43 billion, while excess reserves averaged only $1.9 billion. This relationship was typical for the past 50 years when the Fed did not pay interest on reserves with only two exceptions. Those occurred when the Fed provided unusual levels of reserves to depository institutions in September 2001 following the terrorist attacks and in August 2007 at the onset of the global financial crisis. Other than those two months, excess reserves were less than 10% of total reserve holdings, because depository institutions had an incentive to minimize noninterest-bearing excess reserves held at the Fed.

The failure of high profile U.S. financial institutions in September 2008 caused a great degree of instability in the financial system. Consistent with its role as a lender of last resort,8 the Fed provided unprecedented amounts of liquidity to the financial system. Once the Fed was authorized to pay interest on reserves, the relationship between the levels of required reserves and excess reserves changed dramatically. For example, required reserves averaged almost $100 billion during the first six months of 2012, while excess reserves averaged $1.5 trillion! As shown in Figure 1, since September 2008, the vast majority of total reserves (blue line) held at the Fed belong to the excess reserves category (black line), while required reserves for all depository institutions (red line) have remained relatively stable.9

Figure 1. The Close Historical Relationship between Total and
Required Reserves Ended during the Financial Crisis. 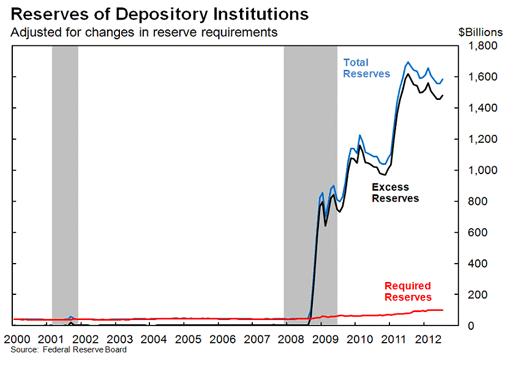 The Fed’s new authority gave policymakers another tool to use during the financial crisis. Paying interest on reserves allowed the Fed to increase the level of reserves and still maintain control of the federal funds rate. As the Board’s website states, “Paying interest on excess balances should help to establish a lower bound on the federal funds rate.”10 The Board’s October 6, 2008, Press Release described the new policy this way:

The payment of interest on excess reserves will permit the Federal Reserve to expand its balance sheet as necessary to provide the liquidity necessary to support financial stability while implementing the monetary policy that is appropriate in light of the System’s macroeconomic objectives of maximum employment and price stability.

This was compelling in the months after September 2008, as the financial crisis deepened, Fed lending from the discount window soared, lending from the newly created liquidity facilities spiked, and excess reserves climbed into the hundreds of billions of dollars range, far exceeding depositories’ required reserves.

In this situation, the Federal Reserve Bank of New York said that the Open Market Desk

Finally, the Fed can change the rate for interest on reserves to adjust the incentives for depository institutions to hold reserves to a level that is appropriate for monetary policy. This also provides an important “exit strategy” tool, which will allow the Fed to better control the level of excess reserves when it begins to remove monetary policy stimulus.13 14

What is the interest rate on reserve balances?

When interest on reserves was first implemented, the Federal Reserve Board used a formula that set the rate paid on required reserves above the rate on excess reserve balances. However, in late 2008 the Board released a series of press releases (See Related Press Releases) announcing adjustments to this formula. Since January 2009, the monthly average interest rate on both required reserve and excess reserve balances has been 25 basis points, or 0.25% at an annual rate, in keeping with the federal funds target range of 0 to 25 basis points during this period (see Figure 2).15

For more information on these rates please visit the Board’s website, Interest on Required Balances and Excess Reserves. 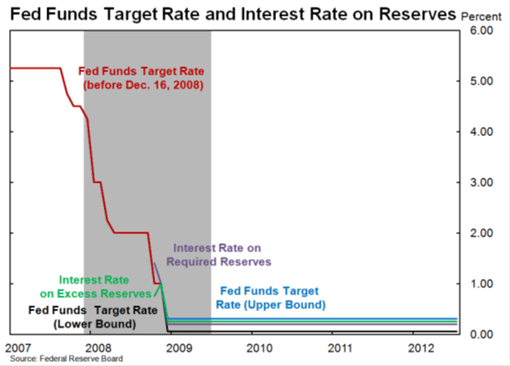 Board of Governors of the Federal Reserve System. 2008. “Press Release,” October 6.

Board of Governors of the Federal Reserve System. 2011. “Credit and Liquidity Programs and the Balance Sheet.” Website, accessed January 2013.

Board of Governors of the Federal Reserve System. 2013a. “Aggregate Reserves of Depository Institutions and the Monetary Base.” H.3 Release, website, accessed January 2013.

Board of Governors of the Federal Reserve System. 2013b. “Interest on Required Balances and Excess Reserves.” Website, accessed January 2013.

Federal Reserve Bank of New York. 2013. “FAQs about Interest on Reserves and the Implementation of Monetary Policy.” Website, accessed January 2013.

Data and Resources on Reserves

For current data on the level of reserves please see the Federal Reserve Board’s weekly H.3 Release, Aggregate Reserves of Depository Institutions and the Monetary Base.

For information on the reserves that depository institutions (including commercial banks, savings institutions, credit unions, and foreign agencies and branches) are required to hold by the Federal Reserve System, please link to "Reserves."

1. See the Board of Governors website for a description of reserve requirements and how they are calculated. Goodfriend (2002) and Walter and Haltom (2009) provide some insights into this policy issue.

2. Amstad and Martin (2011). For additional detail on the Bank of England’s (and several other central banks) policy of paying interest on reserves, see Bowman, Gagnon, and Leahy 2010.

3. Note that, as part of actions to ease monetary policy, on July 5, 2012, the European Central Bank (ECB) announced the decision to cut the interest rate the ECB paid on deposits (reserves) from 25 basis points to zero, a move that also fueled speculation about changes to the Federal Reserve’s interest on reserves policy. See Gage and McCormick 2012.

9. The gray bar represents the 2007-2009 recession as defined by the National Bureau of Economic Research (NBER). See Dr. Econ, June 2003, “Which organization determines whether the U.S. economy is in a recession” or Dr. Econ, January 2008, “How many recessions have occurred in the U.S. economy?” or the National Bureau of Economic Research.

12. Note that some nonbank institutions, for example government-sponsored enterprises (GSEs), still hold deposits at the Fed that do not earn interest. These institutions may be willing to engage in transactions below the rate for interest on reserves, explaining why the federal funds rate may still drop below that rate at times.