The Finer Points of Cyclical and Acyclical Inflation

Distinguishing between items that change price with economic growth and those that are unaffected is one way to learn more about inflation. An update to the SF Fed’s Cyclical and Acyclical Core PCE Inflation measure uses a new method to improve such inflation data.

One way to understand the fine points of inflation is to look at whether a growing economy affects price changes for different types of products. That distinction is at the heart of the San Francisco Fed’s Cyclical and Acyclical Core PCE Inflation measure.

The Federal Open Market Committee or FOMC—which oversees monetary policy in Federal Reserve System—has set a goal for inflation of 2% as measured by annual changes in the personal consumption expenditures (PCE) price index. The PCE price index tracks the prices of a wide range of goods and services over time.

Conventional wisdom says that the FOMC can affect inflation through what is called the “aggregate demand channel.” This involves adjusting interest rates to affect overall economic conditions, which in turn affects inflation. The theory suggests that inflation should tend to follow the same path as changes in overall economic conditions, commonly referred to as the business cycle. In other words, in a growing economy prices should rise faster. However, throughout most of the expansion, inflation has stayed below the 2% goal, a puzzle that economists and policymakers have grappled with for the past several years.

How we study inflation

To improve measurement of how inflation tracks and responds to the business cycle, in 2017 we developed a method known as the Cyclical and Acyclical Core PCE Inflation series that we update each month using data for personal income and outlays from the Bureau of Economic Analysis.

Our series focuses on core PCE inflation, which excludes the typically volatile prices for food and energy-related goods like gasoline. We then break the measure into its cyclical and acyclical components, based on the methodology described in Mahedy and Shapiro (2017). Our methodology entails dividing the categories of products that make up the core PCE price index into those where prices tend to be more sensitive to overall economic conditions, referred to as cyclical, and those that are more sensitive to industry-specific factors, referred to as acyclical.

Recent research in this area by Saeed Zaman (2019) has shed new light on ways to improve our method, which we have incorporated into how we update our series. Specifically, Zaman extends the Mahedy and Shapiro (2017) method with more granular inflation data, breaking categories down even further to improve accuracy in assessing their cyclical nature. Whereas our earlier method labeled 15 broad or aggregated categories of core PCE as either cyclical or acyclical, Zaman (2019) applies the same labeling to more than 100 subcategories. For example, the broad category “transportation services” includes the subcategories of ground transportation, air transportation, and water transportation. These more granular inflation series are available beginning in 1988. The granular series will be more accurate in the sense that a broad category that was labeled cyclical may include some smaller acyclical subcategories, and vice versa.

Figure 1 shows that both the cyclical and acyclical granular inflation series are quite closely correlated (about 94%) with their respective broad series. Thus, the granular series aligns well with the findings in Mahedy and Shapiro (2017) but improves the accuracy of the series slightly during certain periods. For example, the granular measure of cyclical inflation around the end of 2019 was higher than the corresponding broader measure. However, similar episodes in the past indicate that the two series are likely to converge again. 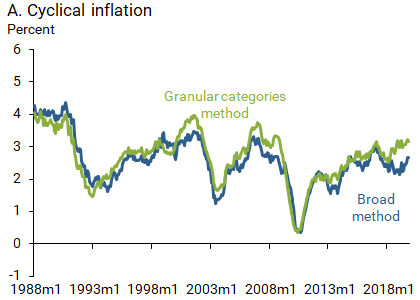 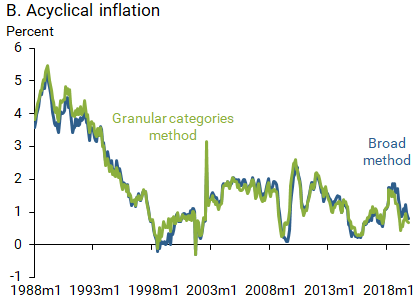 In light of the improved precision from using the more detailed data, we have updated the Cyclical and Acyclical Core PCE inflation page to use the granular methodology for data back to 1988 and for future updates.

Tim Mahedy is Chief of Staff at the Federal Reserve Bank of San Francisco.

Adam Shapiro is a research advisor in Economic Research at the Federal Reserve Bank of San Francisco.