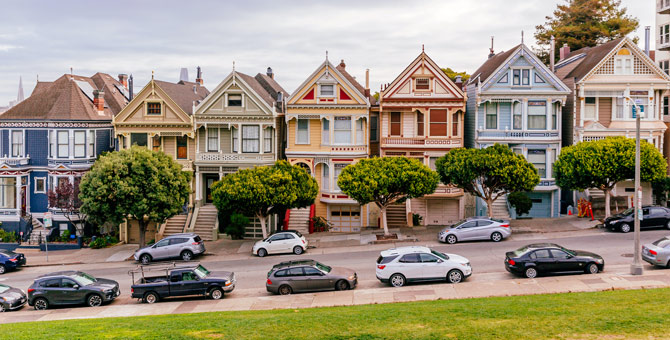 Changes in the housing market are one of the most obvious signs that rising mortgage rates have started to impact the Federal Reserve’s Twelfth District economy. Since May 2022, home prices in the District have begun declining, and existing home sales settled at their lowest level since early 2008 according to the latest First Glance 12L report. So, to what extent may this housing correction be a warning sign for banks of possible future loan defaults and losses?

Home prices and sales in the Western U.S. surged on very low interest rates from mid-2020 through late-2021. The boom ended in early-2022, however, with both new and existing home sales falling sharply through midyear. While new-home sales rebounded moderately in the second half of 2022, existing-home sales deteriorated to their lowest level on record (since 1999) by November. Additionally, in October, pending sales in the Western U.S. were down 46% from a year ago according to the National Association of REALTORS (see bar graph: October U.S. and Regional Pending Sales, 2022 and 2021). One culprit: high-interest rates.

By third quarter 2022, home prices started to decrease. Average single-family home prices in the District peaked in May 2022 and declined by 4.3% through September. Still, District home prices were 8.4% above the previous year in September. Nationally, home prices peaked in June and fell 2.0% during the same period. The recent dip in home prices was not enough to offset the effects of rising mortgage rates on housing affordability, particularly given that home prices remained well above pre-pandemic levels. Housing in the West is still quite unaffordable for a sizable percentage of the population, particularly in Utah and Nevada, which were previously considered reasonable compared to the Bay Area, Los Angeles, and Seattle metro areas.

Some of the largest U-turns in District home prices from mid-2022 to September 2022 came from Washington (down -7.3%), Idaho (5.9%), and California (-4.5%). Parts of Arizona and Utah were also affected by significant price dips. A recent analysis from Moody’s suggests that several inland metro areas in the Twelfth District may see notable price corrections in 2023, including Boise, Flagstaff, Lake Havasu City, Bend, Idaho Falls, and Phoenix.

What are the Risks?

So, how does a market correction affect the banking sector in the District? Right now, banks are in a wait-and-see approach.

Twelfth District banks tend to hold lower levels of one- to four-family mortgage loans than banks nationally. The median ratio of one- to four-family mortgages to tier 1 capital and allowances among District banks was 55 percent, the lowest among the System’s twelve districts and roughly half of the nationwide median of 117 percent. In addition, residential mortgages are more commonly held by mid-sized banks in the District than community banks . Regardless, District banks do hold construction and land development loans which can be housing-related and accounted for a disproportionate share of loan delinquencies and losses following the last housing crisis. They also make loans to non-bank mortgage lenders. Currently, non-bank mortgage lenders are struggling with a sharp decrease refinance activity and loan originations and are rightsizing their costs downward.

Recently, the Mortgage Bankers Association released its estimates for per loan profitability for mortgage originators for the third quarter 2022. They found that each loan generated a net loss of $624 in Q322, compared to a net gain of $2,594 per loan in 3Q21. The profitability of each loan fell because the mortgage originators have not shed costs fast enough, and they have not generated enough revenue through new loans. In contrast to the low interest rates environment of 2020 and 2021, homeowners are not refinancing at the same level and the volume of home purchases and new loans has also decreased.

Through third quarter 2022, mortgage and construction loan delinquencies and losses reported among District banks were nominal. However, if an economic slowdown results in major layoffs amid declining home prices, then we could see additional defaults and losses for banks.

For more details on economic and banking conditions across the District, visit the full First Glance 12L 3Q22 report.