Salt Lake City — The Federal Reserve Bank of San Francisco announced that it has appointed Mark W. Packard to its Salt Lake City Branch Board of Directors, effective February 1, 2022. He will replace Len Williams, former president and chief executive officer of Altabank in American Fork, Utah, who retired from the Branch’s board. 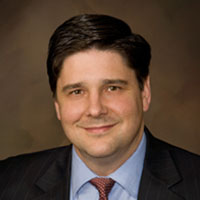 Packard currently serves as vice chair of the Central Bank and Central Bancorporation Boards, and chair of the BMA Banking System Board. He is also a director for the Utah Bankers Association and a member of the Utah Department of Financial Institutions Board of Bank Advisors. Packard served on the Executive Committee for the Friends of Traditional Banking and has recently been nominated to serve as a member of the Money Management Council for the State of Utah. In 2006, Packard was elected to serve on the Springville City Council, where he served for eight years. During that time, he worked with the planning commission, library board, and the art board.

Packard earned a bachelor of science degree in business from Brigham Young University and graduated with honors from Pacific Coast Banking School.

The remaining members of the Salt Lake City Branch Board of Directors include: