Good morning. I’m very pleased to be in such eminent company, especially that of my former advisor at Stanford, John Taylor. And I’ll begin my presentation with a reference to another pathbreaking monetary theorist. Milton Friedman famously said, “Inflation is always and everywhere a monetary phenomenon in the sense that it is and can be produced only by a more rapid increase in the quantity of money than in output.”1 We are currently engaged in a test of this proposition. Over the past four years, the Federal Reserve has more than tripled the monetary base, a key determinant of money supply. Some commentators have sounded an alarm that this massive expansion of the monetary base will inexorably lead to high inflation, à la Friedman.

Despite these dire predictions, inflation in the United States has been the dog that didn’t bark. As Figure 1 shows, it has averaged less than 2 percent over the past four years. What’s more, as the figure also shows, surveys of inflation expectations indicate that low inflation is anticipated for at least the next ten years.

In my remarks today, I will try to reconcile monetary theory with the recent performance of inflation. In my view, recent developments make a compelling case that traditional textbook views of the connections between monetary policy, money, and inflation are outdated and need to be revised. As always, my remarks represent my own views and not necessarily those of others in the Federal Reserve System.

I’ll start with two definitions. The monetary base is the sum of U.S. currency in circulation and bank reserves held at the Federal Reserve. Figure 2 shows the key components of the monetary base since 2007. Up until late 2008, it consisted mostly of currency, with a small amount of bank reserves held mostly to meet regulatory requirements. Since then, the monetary base has risen dramatically, primarily because of a $1.5 trillion increase in bank reserves. The money stock is a related concept. It is the total quantity of account balances at banks and other financial institutions that can easily be accessed to make payments. A standard measure of the money stock is M2, which includes currency, and certain deposit and money market accounts.

Here I should make an important point about something that often confuses the public. The worry is not that the Fed is literally printing too much currency.2 The quantity of currency in circulation is entirely determined by demand from people and businesses. It’s not an independent decision of monetary policy and, on its own, it has no implications for inflation.

The Federal Reserve meets demand for currency elastically. If people want to hold more of it, we freely exchange reserves for currency. If people want less, then we exchange it back. Of course, currency doesn’t pay interest. People hold it as a low-cost medium of exchange and a safe store of value. In fact, over the past four years, U.S. currency holdings have risen about 35 percent. This reflects low interest rates, which reduce the opportunity cost of holding currency. It’s also due to worries about the economy and the health of the banking system, both here and abroad. In fact, nearly two-thirds of U.S. currency is held outside our borders.3 U.S. currency is widely seen as a safe haven. When a country is going through economic or political turmoil, people tend to convert some of their financial assets to U.S. currency. Such increased demand for U.S. currency is taking place in Europe today.

Normally, banks have a strong incentive to put reserves to work by lending them out. If a bank were suddenly to find itself with a million dollars in excess reserves in its account, it would quickly try to find a creditworthy borrower and earn a return. If the banking system as a whole found itself with excess reserves, then the system would increase the availability of credit in the economy, drive private-sector borrowing rates lower, and spur economic activity. Precisely this reasoning lies behind the classical monetary theories of multiple deposit creation and the money multiplier, which hold that an increase in the monetary base should lead to a proportional rise in the money stock.

Moreover, if the economy were operating at its potential, then if the banking system held excess reserves, too much “money” would chase too few goods, leading to higher inflation. Friedman’s maxim would be confirmed. Here’s the conundrum then: How could the Fed have tripled the monetary base since 2008 without the money stock ballooning, triggering big jumps in spending and inflation? What’s wrong with our tried-and-true theory?

A critical explanation is that banks would rather hold reserves safely at the Fed instead of lending them out in a struggling economy loaded with risk. The opportunity cost of holding reserves is low, while the risks in lending or investing in other assets seem high. Thus, at near-zero rates, demand for reserves can be extremely elastic. The same logic holds for households and businesses. Given the weak economy and heightened uncertainty, they are hoarding cash instead of spending it. In a nutshell, the money multiplier has broken down.4

The numbers tell the story. Despite a 200 percent increase in the monetary base, measures of the money supply have grown only moderately. For example, M2 has increased only 28 percent over the past four years.5 Figure 3 shows that the money multiplier—as measured by the ratio of M2 to the monetary base—plummeted in late 2008 and has not recovered since. Nominal spending has been even less responsive, increasing a mere 8 percent over the past four years. As a result, the ratio of nominal gross domestic product, which measures the total amount spent in the economy, to the monetary base fell even more precipitously, as the figure shows. This ratio also has not recovered, illustrating how profoundly the linkage between the monetary base and the economy has broken.

A natural question is, if those reserves aren’t circulating, why did the Fed boost them so dramatically in the first place? The most important reason has been a deliberate move to support financial markets and stimulate the economy. By mid-December 2008, the Fed had lowered the federal funds rate essentially to zero. Yet the economy was still contracting very rapidly. Standard rules of thumb and a range of model simulations recommended setting the federal funds rate below zero starting in late 2008 or early 2009, something that was impossible to do.6 Instead, the Fed provided additional stimulus by purchasing longer-term securities, paid for by creating bank reserves. These purchases increased the demand for longer-term Treasuries and similar securities, which pushed up the prices of these assets, and thereby reduced longer-term interest rates. In turn, lower interest rates have improved financial conditions and helped stimulate real economic activity.7

The important point is that the additional stimulus to the economy from our asset purchases is primarily a result of lower interest rates, rather than a textbook process of reserve creation, leading to an increased money supply. It is through its effects on interest rates and other financial conditions that monetary policy affects the economy.

But, once the economy improves sufficiently, won’t banks start lending more actively, causing the historical money multiplier to reassert itself? And can’t the resulting huge increase in the money supply overheat the economy, leading to higher inflation? The answer to these questions is no, and the reason is a profound, but largely unappreciated change in the inner workings of monetary policy.

This means that the historical relationships between the amount of reserves, the money supply, and the economy are unlikely to hold in the future. If banks are happy to hold excess reserves as an interest-bearing asset, then the marginal money multiplier on those reserves can be close to zero. As a result, in a world where the Fed pays interest on bank reserves, traditional theories that tell of a mechanical link between reserves, money supply, and, ultimately, inflation are no longer valid. In particular, the world changes if the Fed is willing to pay a high enough interest rate on reserves. In that case, the quantity of reserves held by U.S. banks could be extremely large and have only small effects on, say, the money stock, bank lending, or inflation.

As I noted earlier, inflation and inflation expectations have been low for the past four years, despite the huge increase in the monetary base. Of course, if the economy improved markedly, inflationary pressures could build. Under such circumstances, the Federal Reserve would need to remove monetary accommodation to keep the economy from overheating and excessive inflation from emerging. It can do this in two ways: first, by raising the interest rate paid on reserves along with the target federal funds rate; and, second, by reducing its holdings of longer-term securities, which would reverse the effects of the asset purchase programs on interest rates.

In thinking of exit strategy, the nature of the monetary policy problem the Fed will face is no different than in past recoveries when the Fed needed to “take away the punch bowl.” Of course, getting the timing just right to engineer a soft landing with low inflation is always difficult. This time, it will be especially challenging, given the extraordinary depth and duration of the recession and recovery. The Federal Reserve is prepared to meet this challenge when that time comes. Thank you. 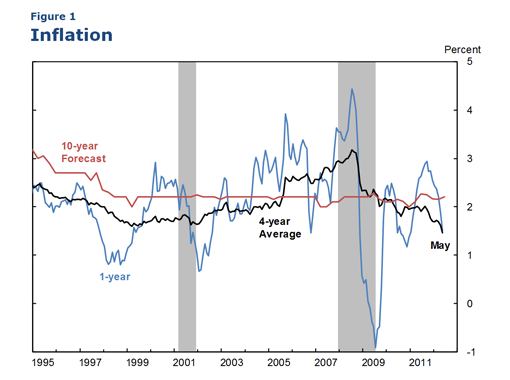 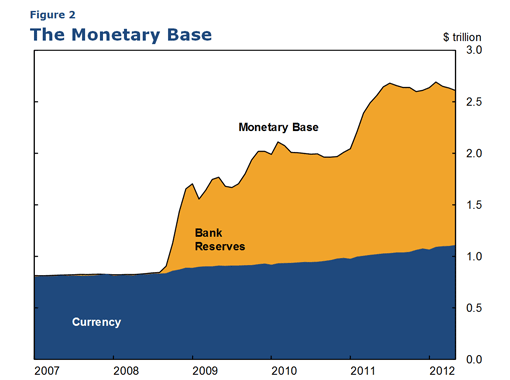 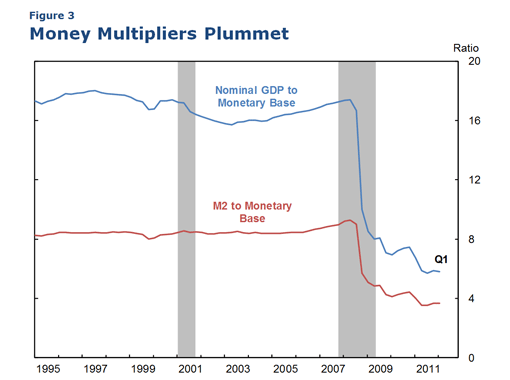 5. Similarly, an alternative measure of the money stock, MZM, increased 26 percent over the past four years.

8. For details on the Fed’s planned exit strategy, see the minutes for the June 2011 FOMC meeting (Board of Governors 2011).

Williams, John C. 2011a. “Economics Instruction and the Brave New World of Monetary Policy.” Presentation to the AEA National Conference on Teaching Economics and Research in Economic Education, June 1.