The Shape of Things to Come

Economic recoveries from the past two recessions have been much more gradual than the rapid V-shaped recoveries typical of earlier downturns. Analysis of the factors that determine economic growth rates indicates that recovery from the most recent recession is likely to be faster than from the two previous recessions, but slower than earlier V-shaped recoveries.

By many measures, the most recent recession has been the worst in the United States since the Great Depression. Will the recovery now under way be rapid, as it was following most postwar recessions through the mid-1980s? Or will growth be more modest, as it was following the two most recent recessions? This question is often rephrased in terms of the shape of the recovery. That is, will economic activity turn up sharply, tracing out the upward sweep of the letter V? Or will it be more gradual, like the lower part of the letter U? This Economic Letter examines the key factors that determined the shape of past recoveries and assesses how they are influencing the pace of recovery this time.

Basic macroeconomic theory identifies three major factors that affect growth of real gross domestic product (GDP): the degree of slack in the economy, the stance of monetary policy, and the trend growth rate of potential GDP. Using the model of the U.S. economy presented in Laubach and Williams (2003), which incorporates these factors, we quantify how much each contributed to previous economic recoveries. Real GDP growth tends to be faster than usual in the early stages of a recovery, reflecting the effects of inventory rebuilding and pent-up consumer and business demand. Deep recessions with lots of economic slack tend to generate more pent-up demand and a quicker bounce-back. The Laubach and Williams model measures slack in terms of the output gap, or the percent deviation of real GDP from potential output, which is defined as the level of real GDP consistent with no upward or downward pressure on inflation, all else being equal (see Weidner and Williams 2009).

Finally, the real GDP growth rate depends on the growth rate of potential output, which in turn depends on the growth rates of productivity, that is, output produced per worker, and the labor force. The level of potential output, its growth rate, and the natural rate of interest can all vary over time. Unlike real GDP and interest rates, they are not directly measurable or observable. However, they can be estimated using statistical and economic models, such as that of Laubach and Williams.

The past is prologue 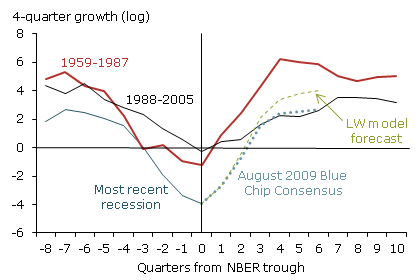 In the postwar period until the 1990s, the U.S. economy tended to bounce back relatively briskly from downturns. As shown in Figure 1, the growth rate of real GDP over the eight quarters immediately following the business cycle low point tended to be very rapid, averaging about 5½%. We drop the 1980 recession from this analysis because the recovery was interrupted by the 1981–82 recession. This rapid GDP growth during the early part of a recovery is the defining characteristic of a V-shaped recovery.

All three factors—a large degree of slack, accommodative monetary policy, and high trend growth—contributed to the pattern of V-shaped recoveries through the 1980s.The first column of Table 1 estimates how much the three factors contributed to growth during recoveries from the 1960s through the 1980s, based on the Laubach and Williams model. During this period, the output gap averaged about 4% at business cycle troughs. The pent-up demand from this large amount of slack contributed about 1 percentage point to growth during the first two years of recovery. Monetary policy tended to be quite accommodative, contributing an additional 1 percentage point to growth. Finally, potential output growth was a relatively rapid 3.6%. These three factors combined predict about 5½% growth during the first two years of recoveries, almost exactly what was recorded.

Table 1
Contributions to real GDP growth (at an annual rate) 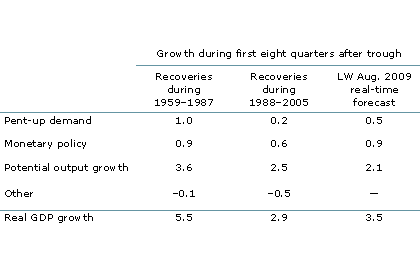 Real GDP growth after the recessions of 1990–91 and 2001 was far less robust, reflecting smaller contributions from all three factors. Real GDP growth averaged only 2.9% in the first two years of these recoveries. The second column of Table 1 reports the three factors’ contributions to real GDP growth following these two recessions. The average output gap at the recession troughs was only 1.4%, about one-third as large as in the recessions of the earlier period, so the effect of pent-up demand was correspondingly lower. Monetary policy was less accommodative, contributing only 0.6 percentage point to growth. Finally, the estimated growth rate of potential output was 2.5%, well below the pace of the earlier period. The combined contribution to growth from these factors was 3.4%, 2.1 percentage points lower than in the earlier recoveries. Note that the actual pace of recovery was even somewhat slower than what the model predicts.

The estimated contributions of the three factors to past recoveries are similar when alternative estimates of the output gap and trend GDP growth are used. Replacing estimates from the Laubach and Williams model with calculations from the Congressional Budget Office (CBO 2010) yields quite similar GDP growth estimates.

At the turning point

Turning to the current recovery, we start by examining forecasts from last summer when the economy first returned to growth. Private forecasters predicted a very gradual recovery, similar to the pattern following the two most recent recessions. Although the National Bureau of Economic Research’s Business Cycle Dating Committee has not yet decided when the trough of the most recent recession occurred, we assume that it happened in June 2009, when real GDP is estimated to have reached its lowest value of this downturn. Figure 1 shows the Blue Chip Economic Indicators August 2009 consensus forecast. The forecast called for about 2.6% growth in the first two years of recovery, a projection that subsequent Blue Chip economic forecasts have echoed. Why have forecasters consistently rejected evidence from earlier V-shaped recoveries and predicted such a slow rebound?

Among the reasons for anticipating a slow recovery, economists point to the aftereffects of the banking and financial crisis, including debt hanging over U.S. households, and limitations on monetary stimulus owing to the fact that the Federal Reserve’s policy interest rate is effectively at its zero lower bound. We quantify these effects the same way that we examined recoveries from past recessions, using August 2009 Blue Chip real interest rate forecasts and data available in August 2009 to construct real-time Laubach and Williams model forecasts.

At the recession trough, the Laubach and Williams model predicted growth of about 3½% over the first two years of recovery. As seen in Figure 1 and Table 1, this is nearly one percentage point faster than the contemporaneous Blue Chip forecast, but still well below V-shaped recoveries of the past.

The model’s prediction of growth a little over 3½% reflected its assessment of a moderate output gap and considerable monetary stimulus, but relatively slow growth in potential output. First, the Laubach and Williams model output gap estimates during the latest recession have been considerably smaller than other estimates (see Weidner and Williams 2009). The model estimates an output gap of 2.3% for the second quarter of 2009, larger than in the prior two recessions, but well short of the average for recessions of the 1960s through the 1980s.

Second, the model’s estimate of the natural rate of interest was a historically low 1%, which likely reflected heightened uncertainty and a weakened financial system following the mortgage meltdown and financial panic. This very low value of the natural interest rate measures the “headwinds” that are holding back the economy. The effect is similar to, but much more severe than, the experience of the mid-1990s, when the banking sector was suffering large losses following the savings and loan crisis (see Greenspan 2004). In the recent downturn, the Fed cut nominal rates to near zero, bringing the real federal funds rate to about –1½%. This stimulated growth, but not as much as would have occurred if the natural interest rate had not declined. Also, the zero lower bound on nominal interest rates limited the ability of the Fed and other central banks to increase traditional monetary stimulus (see Williams 2009). Finally, the Laubach and Williams model estimate of the growth rate of potential output was a very low 2.1%, likely reflecting the low prevailing rate of labor force growth.

Through the first three quarters of the recovery, the Laubach and Williams model forecast from last August has proven to be reasonably accurate. During that period, real GDP has increased at a 3.7% annual rate, a touch faster than the model forecast. In contrast, the August 2009 Blue Chip forecast underpredicted the pace of recovery by more than one percentage point. 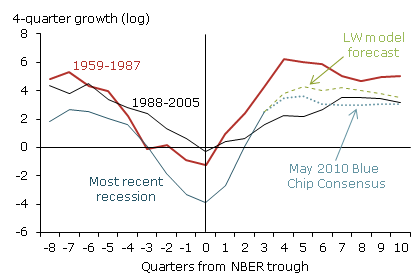 What is the likely shape of the recovery for this year and next? Figure 2 compares the most recent Blue Chip consensus forecast for real GDP growth with the Laubach and Williams model forecast updated using data through the first quarter of 2010. The Blue Chip forecast remains relatively pessimistic, calling for approximately 3% growth this year as well as next, about the same rate experienced during the prior two recoveries.

By contrast, the Laubach and Williams model currently calls for nearly 4% growth this year and about 3½% next year. This is quite similar to the model’s August 2009 forecast, reflecting the same three factors: a moderate bounce-back from a moderate output gap, considerable monetary stimulus fighting strong headwinds, and sluggish growth of potential output. Of course, all three factors are measured with considerable uncertainty and could change. For example, if the CBO’s 1.6% estimate of potential output growth this year and next is accurate, then the Laubach and Williams forecast would be close to that of Blue Chip. Or, if financial conditions improve markedly, the natural rate of interest may rise from its current low value, implying faster real GDP growth ahead. Similarly, if the output gap were larger than the model estimates, then, all else equal, the predicted growth rate could exceed 4½% this year and next.

In the past, large output gaps, rapid growth of potential output, and real interest rates well below the natural interest rate have contributed to rapid V-shaped recoveries. These factors were much more muted in the recessions of 1990–91 and 2001, leading to U-shaped recoveries. Now they point to a moderate pace for the current recovery, somewhere between the U and V shapes of the past.

Justin Weidner is a research associate at the Federal Reserve Bank of San Francisco.

Greenspan, Alan. 2004. “Risk and Uncertainty in Monetary Policy.” Remarks at the meetings of the American Economic Association, January 3.