What Is the New Normal Unemployment Rate?

Recent labor markets developments, including mismatches in the skills of workers and jobs, extended unemployment benefits, and very high rates of long-term joblessness, may be impeding the return to “normal” unemployment rates of around 5%. An examination of alternative measures of labor market conditions suggests that the “normal” unemployment rate may have risen as much as 1.7 percentage points to about 6.7%, although much of this increase is likely to prove temporary. Even with such an increase, sizable labor market slack is expected to persist for years.

In the past, the U.S. labor market has proven to be very flexible and recessions have not usually been followed by long-lasting increases in the unemployment rate. But, in the wake of the most recent recession, many economists are concerned that developments such as mismatches in the skills of workers and jobs, extended unemployment benefits, and a rise in long-term joblessness may have raised the “normal” or “natural” rate of unemployment above the 5% level that was thought to be typical before the downturn. Indeed, a few economists have gone so far as to argue that the rise in the unemployment rate to its current level of 9% primarily reflects an increase in the natural rate, implying there is little slack in labor markets and therefore little downward pressure on inflation. This Economic Letter examines evidence regarding changes in the natural rate of unemployment in the United States since the recession began.

The “natural” rate of unemployment cannot be measured directly, but must be inferred from other information. The Congressional Budget Office regularly reports its estimates of a closely related concept, NAIRU, which stands for non-accelerating inflation rate of unemployment (CBO 2011). The CBO currently estimates that the NAIRU is 5.2%, about half a percentage point above its estimate of 4.8% immediately before the recession. But, if the labor market has experienced significant structural changes in recent years, the CBO estimates may not be good guides for the current situation. Therefore, we examine four alternative estimates of the natural rate based on labor market indicators that allow for a broad set of time-varying influences.

One popular approach is based on the availability of jobs. The job vacancy rate tends to be negatively related to the unemployment rate in a pattern known as the Beveridge curve. However, during 2010, job vacancies were much higher than expected given the very high unemployment rate (see Barnichon et al. 2010 and Kocherlakota 2010). This suggests that labor market conditions may not be as bad as implied by the CBO estimate of the unemployment gap in the fourth quarter of 2010 of 4.4 percentage points, which is the difference between the actual unemployment rate of 9.6% and the CBO estimate of the natural rate of 5.2%. Panel A of Figure 1 plots the job vacancy rate against CBO estimates of the unemployment gap. The curved line shows the typical relationship between these two variables through 2009. We estimate the curve by performing a regression, a statistical exercise tracing the historical relationship between the CBO unemployment gap and the private vacancy rate, the inverse of the private vacancy rate, and a constant. We perform the same type of exercise in the remainder of this Letter in analyzing other alternative measures. The red dots show data from 2010.

Another measure of labor market conditions, which receives surprisingly little attention, is based on perceptions of how easy or hard it is to find a job. The Conference Board’s consumer confidence survey has asked households this question every month since 1978. A high index reading indicates a strong job market, a low reading a weak job market. Panel B of Figure 1 shows that the responses to this question have been closely related to labor market slack as measured by the CBO unemployment gap. Similar to the job vacancy pattern, job market perceptions in 2010, although poor by historical standards, were much better than the CBO unemployment gap implied. Based on experience, perceptions of the job market in the fourth quarter of 2010 were consistent with an unemployment gap of about 2.7 percentage points, which translates to a natural rate of unemployment of 6.9%.

Two other measures of economic conditions also suggest that the natural rate has risen, but by a smaller amount. One is based on the job quits rate. The second is based on a survey of businesses that asks whether respondents have “hard-to-fill” vacancies. Both of these measures indicate a stronger job market than the CBO unemployment gap would suggest, as seen in Panels C and D of Figure 1. The job quits rate implies a natural rate of 6.5% and the business survey implies a natural rate of 6.6% in the fourth quarter of 2010.

Figure 2
Estimates of the natural rate 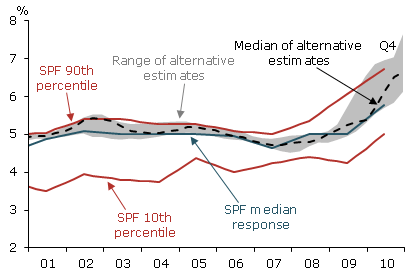 One should be cautious in interpreting these recent patterns as compelling evidence of a permanent rise in the normal rate of unemployment. The relationships shown in Figure 1 are not exact and are subject to a variety of transitory influences. For example, Tasci and Lindner (2010) show that a rise in vacancies relative to the Beveridge curve is typical in the early stage of a recovery and should not be construed as a shift in the curve. To reduce the effects of such deviations, we average the natural rate estimates over four quarters. Using this four-quarter average through the end of 2010, the natural rate estimates range from 6.1% from the business survey to 7.7% based on job vacancies. The median implied value of the natural rate based on these labor-market-based alternative estimates is 6.7%, 1.9 percentage points above the 4.8% pre-recession median estimate. Figure 2 shows the median estimates and range of values implied by these four alternative measures since 1996 using the four-quarter averages.

Consistent with these signs of a rise in the natural rate, in August 2010 professional forecasters boosted their estimates of the natural rate to 5.8%, a 0.8 percentage point increase from the previous year’s estimate. That’s the highest figure since 1996, when the Survey of Professional Forecasters (SPF) began asking respondents for natural rate estimates. The blue line in Figure 2 shows the median SPF natural rate estimate. The red lines are the 90th and 10th percentile SPF responses in each period. The grey shaded area shows the range of the four alternative estimates. The SPF estimates did not differ appreciably from the CBO estimates until 2010, when the median SPF estimate exceeded the CBO estimate by 0.8 percentage point. The entire distribution of SPF forecasts has recently shown significant upward shifts, along with the whole range of alternative estimates that we calculated.

What could be driving the natural rate up?

A second explanation is that the degree of mismatch between job seekers and potential employers has increased. The construction, finance, and real estate sectors have shrunk after the bursting of the housing bubble and the subsequent financial crisis. The skills of workers who used to be employed in those sectors may not be easily transferable to growing sectors such as education and health care (see Rissman 2009 and Barnichon et al. 2010). Similarly, the housing bust has left millions of homeowners underwater on their mortgages, which locks them into their homes and may make it more difficult for them to move to higher growth areas. These sectoral and geographic mismatches between workers and job openings may be making it harder for employers to fill vacancies.

A third explanation involves the sizable increase in long-term unemployment over the past few years. Workers out of jobs for extended periods may experience higher rates of unemployment owing to deterioration of skills and weakening labor market attachment. The previously discussed mismatch between skills and available jobs is likely to intensify this problem.

A number of studies have attempted to quantify the magnitude and duration of the effects of these factors on the natural rate. Daly et al. (2011) estimate that the natural rate has increased from its pre-recession level by 1¼ percentage points. Knotek and Terry (2009) show that natural rates of unemployment have tended to rise in other countries that experienced banking crises and severe recessions. Meanwhile, Valletta and Kuang (2010) estimate that the extension of unemployment benefits increased the natural rate by about 0.8 percentage point. Other estimates suggest even larger effects (Fujita 2011). Importantly, the direct effects from unemployment benefits should end after the maximum eligibility period is brought back to its normal level. However, job mismatches and the increase in long-term unemployment will likely have more persistent effects on the natural rate.

Mounting evidence suggests that structural factors may have increased the “normal” rate of unemployment to about 6.7%. Much of this increase is likely to be temporary. In particular, the extension of unemployment benefits probably accounts for about half of the increase. But, even with a 6.7% natural rate, current and forecasted levels of unemployment imply that significant labor market slack will persist for several years. It is important to stress that each of the methods used to estimate the natural rate is subject to considerable error, especially given the limited experience of very high unemployment in the post-World War II U.S. economy. As the recovery proceeds, we should develop a clearer picture of the new normal rate of unemployment.

Justin Weidner is a research associate at the Federal Reserve Bank of San Francisco.