Household Inflation Expectations and the Price of Oil: It’s Déjà Vu All Over Again

The University of Michigan survey of consumers shows that expected inflation has moved up noticeably over the past few months, raising concerns that we may be in for a period of rising inflation. However, the increase in expected inflation likely reflects the excess sensitivity of consumers to food and energy prices. Consistent with this hypothesis, household surveys have not forecast inflation well in recent years, a period of volatile food and energy prices.

According to the Thomson Reuters/University of Michigan survey of consumers, households currently expect inflation to average about 4½% over the next year, up noticeably from 3% at the end of 2010. These results come at a time of surging commodity prices and raise the possibility that inflation might accelerate substantially and even lead to a return of the stagflation of the 1970s.

Each month, the University of Michigan’s Survey Research Center assesses consumer sentiment by interviewing a random sample of approximately 500 U.S. households. As part of the survey, respondents are asked to forecast key macroeconomic variables, such as inflation, interest rates, and unemployment. Since 1977, they have been asked how much they expect prices to go up over the next year and the next five to ten years. 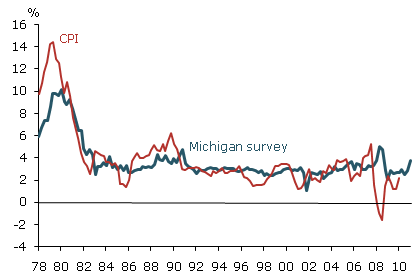 Note: Each point on the line labeled “CPI” plots the value of CPI inflation over the next 12 months. Data for expected inflation from the Michigan survey are plotted on the same basis.

Inflation fell sharply in the early 1980s and has tended to move down in fits and starts since then. Inflation volatility has been noticeably high in the past few years, especially given that its average level has been relatively low. Expected inflation was quite stable from the mid-1990s to the mid-2000s, but spiked quite dramatically in the first part of 2008. The spike was reversed in a few months and expected inflation stayed low through the end of last year. But expected inflation has spiked again since the beginning of this year.

Not all surveys have shown such a sharp increase in expected inflation recently. The Survey of Professional Forecasters (SPF) polls approximately 50 private-sector economists who regularly produce macroeconomic forecasts. In the latest SPF survey, conducted in the second quarter of this year, CPI inflation was expected to average 2.1% over the next four quarters. This is less than half the inflation rate expected by households and about 0.4 percentage point higher than the average of the four SPF surveys conducted in 2010.

What do households see that makes them expect significantly higher inflation over the next year? Needless to say, households are likely to look at many things when trying to determine what future inflation will be. But it is hard not to be struck by the coincidence between the recent jumps in oil and other commodity prices and the jump in inflation expectations. And it is especially striking that the same coincidence happened in 2008 (see Huang and Trehan 2008). 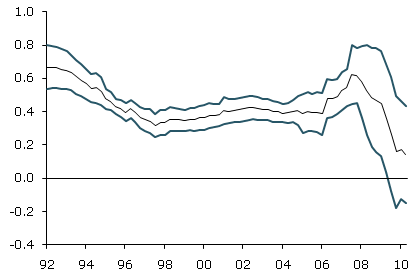 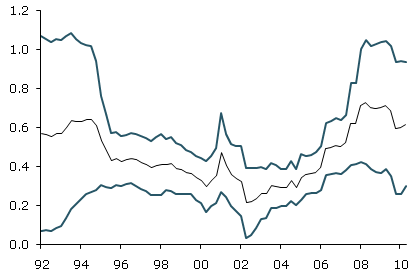 Perhaps the most striking result is that consumer inflation expectations respond about as much to noncore inflation as they do to core inflation. In fact, by the end of the sample they respond more strongly to the former than the latter. This is extremely surprising because the two categories account for very different shares of consumer expenditures. From 1985 to 2010, the weight on food and energy in the CPI varied from a low of 21.3% in 2002 to a high of 24.4% in 1990. This means that a 1% increase in noncore inflation cannot account for more than about a 0.25% increase in headline inflation in the quarter that the increase takes place.

Thus, households appear to be reacting to recent inflation data in a way that is not warranted by the actual dynamics of inflation. But could they be processing other information that might allow them to make more accurate inflation forecasts? In fact, it has often been argued that household survey expectations constitute good forecasts of inflation. For instance, Ang, Bekaert, and Wei (2007) state that “even participants in the Michigan surveys who are consumers, not professionals, produce accurate out-of-sample forecasts.”

To see if this accuracy holds up, Table 1 compares the forecasting performance of the Michigan survey (first column) with some simple statistical alternatives since 2002, which is after the Ang et al. study ends. The table shows that the Michigan survey had a mean error of –0.6, which means that it overpredicted inflation over the next year by 0.6 percentage points on average. However, a small mean error does not necessarily constitute a good forecast, as large positive errors could be offset by large negative errors. To take care of this possibility, we use a statistical measure called the root mean square error, or RMSE, that takes into account the extent of variance of the error.

The results are straightforward. The Michigan survey has the highest mean error, more than three times as large as the next-worst performer. And its RMSE, the second highest in the table, is almost a third larger than the RMSEs from the forecasts based on a past value of inflation. The performance of the Michigan survey is considerably worse if we focus our attention on the past five years of the sample, when oil and commodity prices have been especially volatile. Over this period (not shown), its mean error is -1.1% and its RMSE is 2.4%. The performances of the other forecasts suffer as well, though to a slightly lesser extent.

At the same time, the high sensitivity of household inflation expectations to noncore inflation is puzzling. One could argue that this excess sensitivity reflects the fact that consumers buy things such as food and gas more frequently than they buy home furnishings or haircuts. In this case, expected inflation should come down relatively quickly because households will buy enough nonfood and non-energy goods at some point. It’s also possible that households’ sensitivity to noncore inflation goes up following substantial, sharp increases in the price of energy and food items, such as those that occurred in the 1970s and over the past few years. This would be consistent with higher household sensitivity to noncore inflation at either end of our sample in Figure 2B. This similarity to the 1970s is unsettling because it suggests that consumers are not accounting for the ways monetary policy has changed over this period.

Bharat Trehan is a research advisor in the Economic Research Department of the Federal Reserve Bank of San Francisco.