When the housing boom of the past decade turned into a bust, falling house prices played a primary role in driving up delinquency and foreclosure rates. As housing values fell, distressed borrowers lost equity, which hindered their ability to escape delinquency by prepaying their mortgages by refinancing or selling their homes. Falling house prices may have especially impinged on subprime and adjustable-rate borrowers. These homeowners may have counted on being able eventually to refinance into loans with terms more affordable than those of their original mortgages.

Since their peak in mid-2006, house prices have experienced a fall without precedent in the post-World War II era, declining 32% nationwide and more than 45% in markets such as Las Vegas, Phoenix, and parts of Florida. Those declines have played a key role in the crisis of the mortgage market, which has been marked by surging delinquencies and foreclosures. An early study of the crisis by Doms, Furlong, and Krainer (2007) found a strong positive relationship between the rate of house-price depreciation in urban areas and the subsequent rate of subprime mortgage delinquency.

What are the mechanisms connecting falling house prices and rising delinquencies? One important link may be that, when home equity declines, distressed borrowers have few options except to stop paying their mortgages. Two alternatives might be to use the proceeds from selling the house or refinancing the mortgage to prepay the original loan. Of course, refinancing works only if the new terms are more affordable. However, if the borrower has little or no equity in the house, those options may be closed off. Doms et al. note that “homeowners with a greater equity stake would be in a better position either to sell their homes and pay back the remaining principal or to refinance existing mortgages to ones that would offer lower, more affordable payments.”

This Economic Letter explores the connections between house prices, prepayment, and delinquency during the 2001–2008 period. It draws on work reported in greater detail in Krainer and Laderman (2011), and complements Hedberg and Krainer (2010), which emphasizes how tighter underwriting standards restrained prepayments in the late 2000s.

How does delinquency occur?

Borrowers can become delinquent on their mortgages for several reasons. An obvious cause might be an unexpected life event that makes a borrower unable to pay, such as a major medical expense or job loss. However, life events cannot fully explain the sharp increase in mortgage delinquencies that began in 2007. For example, although unemployment has risen sharply, it hasn’t increased enough to explain the jump in delinquency rates.

The fall in house prices appears to be a key contributor to the run-up in mortgage delinquencies during this period. As prices dropped, it became more difficult for distressed borrowers to get out of their original mortgages, that is, to prepay them. Lower prices meant home sales might not raise enough funds to pay off the mortgages. In addition, lower equity meant less chance of being able to refinance.

Subprime borrowers may have been particularly vulnerable. Loans to borrowers with poor credit were originally intended as bridge financing to repair a borrower’s credit rating. Because of the risk involved in lending to such borrowers, interest rates were typically high. Those high rates made subprime loans burdensome in the long run.

But, as Gorton (2008) explains, subprime borrowers who regularly made timely payments were eventually rewarded with higher credit scores. In addition, they were building equity in their houses. When they had built up sufficient equity, meaning that the value of the loan relative to the value of the home was not too high, borrowers could refinance into more affordable loans. In fact, many subprime borrowers apparently counted on continually rising home prices to allow them to refinance. Of course, house prices didn’t keep rising indefinitely. They first slowed and then fell, leaving many subprime borrowers unable to refinance. As a result, many borrowers couldn’t keep making mortgage payments.

What role for prepayment?

To investigate the links between house prices, delinquency, and mortgage prepayment, Krainer and Laderman (2011) use loan level information on over 770,000 first-lien, owner-occupied, conventional mortgages originated between the first quarter of 2001 and the first quarter of 2008. We then look at those loans over the two years after they were originated to see what percentage was paid off and what percentage was delinquent at any time during that period. The data come from LPS Applied Analytics, which compiles reports from most of the nation’s major mortgage servicers. 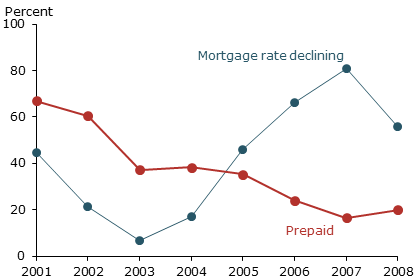 Note: Rates shown for adjustable-rate mortgages only. Mortgage ratedeclining is percent of mortgages with higher current rate than market rateany time within 24 months. 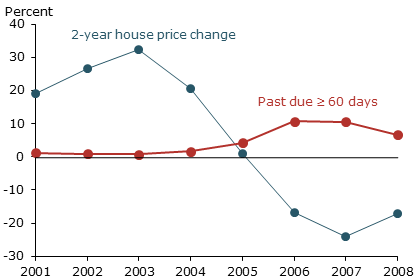 Of course a decrease in the prepayment rate does not automatically mean that fewer borrowers are able to prepay. Borrowers often may be able to prepay but choose not to do so. And many borrowers who do prepay have reasons other than avoiding foreclosure. Some borrowers who prepay may be selling their homes because they are moving. Others may be refinancing to lower their mortgage payments, even if they’re not distressed. Still others may wish to capitalize on rising home values by extracting cash to finance large expenses, such as education or home improvements. On the other side, borrowers may avoid prepayment because they think that conditions will be more advantageous in the future.

To assess whether a declining ability to qualify is causing the fall in prepayment rates, Krainer and Laderman identify a group of borrowers who could have gotten lower interest rates if they refinanced and paid off their mortgages. If at any time within two years after a loan has originated, the market rate on fixed-rate mortgages was at least one-half percentage point below the borrower’s current interest rate, then that individual is identified as a prepayment candidate. In Figure 1, the blue line plots the proportion of borrowers in that category for the 2001 to 2008 origination groups.

This pattern of weak prepayment in the face of strong incentives suggests borrowers were unable—as opposed to unwilling—to prepay. To test this, Krainer and Laderman perform a statistical exercise to control for other loan features and characteristics of borrowers. The exercise shows that increases in loan-to-value ratios significantly reduce the incidence of prepayment in our data. These increases in loan-to-value ratios may be driven by decreases in house prices. This provides statistical evidence that falling house prices may have been associated with the decline in prepayments.

To further test the correlation between house prices, prepayment, and delinquency, Krainer and Laderman examine the trend in house prices. The blue line in Figure 2 plots house price appreciation in the two years following mortgage origination. Appreciation is measured by looking at house prices in the same zip code as the mortgages in our data base, using home value indexes constructed by Zillow.com, an online housing data service. For example, borrowers who took out mortgages in 2003 saw the value of houses in their zip codes increase by about 32% on average over the next two years.

House price appreciation slowed for 2004 borrowers, which may have been the first group facing constraints on their ability to prepay and thereby avoid delinquency. The delinquency rate does not begin to tick up until the 2004 group, even though prepayment rates fell for the 2002 and 2003 groups. Of course, slower house price appreciation may have reduced borrower incentives to extract cash from home equity by prepaying. But the increase in delinquency suggests that financial distress was also a factor. Some borrowers who could have avoided delinquency if they sold or refinanced may not have been able to do so. 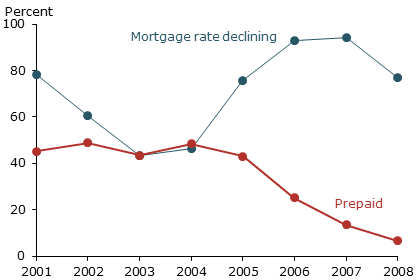 While many factors contributed to the mortgage crisis, most analysts agree that house prices played a primary role. Even with attractive mortgage rates, the drop in loan-to-value ratios severely limited the ability of borrowers to avoid delinquency by selling their homes or refinancing their loans. This was especially true for subprime borrowers and homeowners with adjustable-rate mortgages. But the decline in house prices appears to have dampened the opportunity for all mortgage borrowers to pay off the principal balance of their loans as an alternative to delinquency.

Gorton, Gary. 2008. “The Panic of 2007.” In Maintaining Stability in a Changing Financial System, proceedings of the 2008 Jackson Hole Economic Policy Symposium, sponsored by FRB Kansas City.