California job growth over the past two decades has been relatively anemic compared with gains in the rest of the country. Nevertheless, economic output has grown faster in California than in the rest of the United States. One factor underlying this pattern may be the growth of higher-wage jobs in California, which has contributed more to output than to employment growth. This creates relatively few opportunities for low-skilled workers, which may help explain why poverty increased more in California than in most states over the period.

How does California’s economic performance compare with that of other states? Consider two of the main barometers of state economic performance: economic output and jobs. Typically, when a state’s economy expands, we expect the number of jobs to grow to the same extent. But from 1990 to 2011, California’s growth did not follow this pattern. Economic output in California grew faster than in many states, while job growth was slower than most states.

This Economic Letter provides an empirical description of California’s economic performance compared with other states, focusing on the metrics of output and jobs. It draws on results from a large research project, Compare50.org, which provides a rich, multidimensional database on individual state economic performance (see Neumark and Muz, 2013, and view the project at http://www.Compare50.org). The Letter also explores two possible reasons why California has performed differently than the rest of the United States. One reason is that employment in the state has shifted to high-wage industries with high levels of productivity that require fewer workers. A second possible reason, that higher wages are needed to cover higher housing costs, cannot explain the difference between economic and job growth.

Economic growth at the state level is commonly measured using overall state economic output, or gross state product (GSP). We look at inflation-adjusted, or real, GSP to avoid the effects of rising prices. And we consider real GSP on a per capita basis to measure the growth in economic resources per person, rather than growth that comes from a rising population. 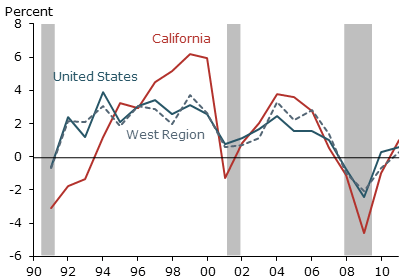 In assessing whether a single state’s economic performance is strong or weak, it makes sense to compare performance across states because business cycles affect the whole nation. We compare California’s performance with the rest of the United States, and with other western states, including Alaska, Arizona, Colorado, Hawaii, Idaho, Montana, Nevada, New Mexico, Oregon, Utah, Washington, and Wyoming. Figure 1 shows growth in real per capita GSP for California, the western states excluding California, and the United States, excluding California but including the District of Columbia. Since the early 1990s, real GSP growth in California has followed a more distinct cyclical pattern than in the western region or the rest of the United States. Overall, California’s economic growth was only slightly lower than that of other states. Of course, economic output in all three areas fell during the Great Recession from 2007–09.

For the whole sample period 1990 to 2011, California ranked 29th in output growth, meaning that 22 states had lower growth and 28 had higher growth. If we exclude the Great Recession and consider data only through 2007, California’s growth compares more favorably with that of other states, ranking 19th. Thus, excluding the Great Recession, California’s economic growth outpaced about 60% of states in the nation. Still, each of the three recessions of the past 20 years—for different reasons—have been more severe in California than in the rest of the nation.

Our second measure of a state’s economic health is job growth. To measure it, we use data collected from employers through the Quarterly Census of Employment and Wages (QCEW) conducted by the U.S. Bureau of Labor Statistics. The QCEW data provide a reliable measure of job growth over the long term because they capture nearly all employment in the U.S. economy, not just a sample. 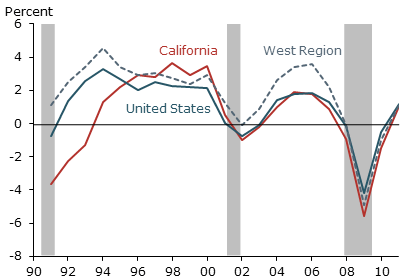 Figure 2 shows California employment growth relative to that in the rest of the United States and the western region. Comparing it with Figure 1, it is evident that job growth largely mirrors output growth. However, the figures also show that, unlike output growth, job growth in California lagged behind the United States and the rest of the western region during the mid-2000s boom. This implies that, to some extent, overall economic output spurted ahead in California during this period without the usual accompanying increase in jobs. A similar pattern is also apparent in the late 1990s when California’s output boom was much more pronounced than its jobs boom.

Looking at job growth over the entire 1990 to 2011 period provides more evidence for this pattern. In contrast to GSP growth, California’s job growth was relatively anemic compared with that in other states. For the whole period, only 11 states had slower job growth. This pattern holds even if we look at the data only through 2007. Only 12 states reported slower job growth. Thus, California was in the bottom quarter of states for job growth, but near the median for output growth.

Why did output growth outstrip job growth in California?

A number of factors could explain why output growth has outstripped job growth in California. Perhaps the most natural explanation is that employers in the state have hired relatively more higher-wage workers. Higher-wage workers tend to be more productive, that is, they produce more output per hour of work. As a result, California could have registered disproportionately large growth of output for the number of jobs created.

One reason California employers may have hired more high-wage workers than employers in other states is high housing costs. All else the same, to afford more expensive housing, workers must earn more. If worker earnings have to compensate for the higher cost of housing, employers may use fewer workers overall, substituting away from lower-skill, lower-wage workers.

These links can get complicated. High housing costs could conceivably reflect a more productive economy, not the other way around. A more productive economy enables employers to pay more, and a large number of highly paid employees can drive up house prices. At the same time though, as the area’s economy improves, it could offer more amenities that workers like, enabling employers to pay them less. Alternatively, such factors as the mix of industry could have led to more hiring of high-skill, high-earnings workers in California. For example, some evidence suggests that California’s relatively faster growth in high-wage jobs may have been partly fueled by growth in technology- and information-intensive industries. 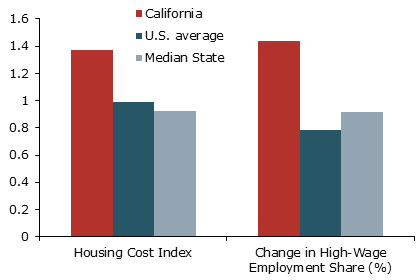 Figure 3 shows that California’s housing costs over the period were 40% higher than in the rest of the nation. The figure also shows that the share of employment in high-wage industries in California grew more than 0.6 percentage point faster per year than in the rest of the United States. High-wage industries are identified using QCEW data for employment in the top third of industries ranked according to average wages per employee across the years of our study.

Do these two factors—higher housing costs and faster growth in high-wage employment—help explain the gap between economic growth and job growth in California? To answer this, we check whether other states that experienced higher housing costs and faster high-wage employment growth had patterns similar to California’s. We look first at states where housing costs were above the median value across all states, averaged over the years of the study. These high-housing-cost states had 0.32 percentage point slower economic growth per year. But job growth in those same states was slower by nearly the same amount, 0.34 percentage point per year. Since these states had no relative gap in the growth rates of output and jobs, the comparison suggests that higher housing costs may not be the underlying cause of the discrepancy in California.

Computing these relationships for all states does not necessarily explain California’s experience. Nonetheless, our results are consistent with the idea that California’s economic growth outstripped its job growth because of relatively high gains in the share of high-wage employment. To be sure, this explanation holds for the entire sample period, but does not explain the pattern from 2001 to 2011, when California was below the median in growth of high-wage employment share.

Evidence suggests that the reason California has experienced faster economic growth than job growth is that employment has shifted to high-wage industries. Slower job growth, particularly in low-wage industries, is a potentially important problem if it implies fewer opportunities for less-skilled workers.

A related concern is the growth in the poverty rate over this same period. California’s poverty rate adjusted for housing costs grew over five percentage points from 1990 to 2011, the third largest increase among all states (see Neumark and Muz 2013). Even excluding the Great Recession, California’s growth in the poverty rate still ranked 13th highest among states. This rise in poverty is consistent with relative declines in job opportunities for less-skilled workers. California’s relatively high economic growth combined with its relatively low job growth may have disadvantaged less-skilled workers, highlighting a key challenge facing policymakers. That is, the greater economic efficiency that helps spur economic growth sometimes comes at the cost of social equity.

Jennifer Muz is a Ph.D. candidate at the University of California, Irvine.

Neumark, David, and Jennifer Muz. 2013. How Does California’s Economic Performance Compare to the Other States? San Francisco, CA: Next 10 Foundation.