How Stimulatory Are Large-Scale Asset Purchases?

The Federal Reserve’s large-scale purchases of long-term Treasury securities most likely provided a moderate boost to economic growth and inflation. Importantly, the effects appear to depend greatly on the Fed’s guidance that short-term interest rates would remain low for an extended period. Indeed, estimates from a macroeconomic model suggest that such interest rate forward guidance probably has greater effects than signals about the amount of assets purchased.

With the Federal Reserve’s benchmark federal funds rate near zero since late 2008, the central bank has used alternative tools to stimulate the economy. In particular, the Fed has purchased large quantities of long-term Treasury and mortgage-backed securities, a policy often referred to as quantitative easing. It has also provided more information about the probable future path of the short-term interest rate, a policy known as forward guidance. This Economic Letter uses a macroeconomic model to examine the effects of quantitative easing and forward guidance on growth and inflation.

In November 2010, the Fed’s policy committee, the Federal Open Market Committee (FOMC), announced a program to purchase $600 billion of long-term Treasury securities, the second of a series of large-scale asset purchases (LSAPs). The program’s goal was to boost economic growth and put inflation at levels more consistent with the Fed’s maximum employment and price stability mandate. In Chen, Cúrdia, and Ferrero (2012), we estimate that the second LSAP program, known as QE2, added about 0.13 percentage point to real GDP growth in late 2010 and 0.03 percentage point to inflation.

Our analysis suggests that forward guidance is essential for quantitative easing to be effective. Without forward guidance, QE2 would have added only 0.04 percentage point to GDP growth and 0.02 to inflation. Under conventional monetary policy, higher economic growth and inflation would usually lead the Fed to raise interest rates, offsetting the effects of LSAPs. Forward guidance during QE2 mitigated that factor by making it clear that the federal funds rate was not likely to increase.

Our estimates suggest that the effects of a program like QE2 on GDP growth are smaller and more uncertain than a conventional policy move of temporarily reducing the federal funds rate by 0.25 percentage point. In addition, our analysis suggests that communication about when the Fed will begin to raise the federal funds rate from its near-zero level will be more important than signals about the precise timing of the end of QE3, the current round of LSAPs.

Evaluation of LSAP programs requires a model to examine what would have happened without these initiatives. Chen et al. (2012) propose a standard macroeconomic model with two additional features: first, allowing LSAPs to affect the spread between short- and long-term yields, and, second, allowing changes in that spread to affect economic activity and inflation.

The first feature involves LSAP effects on financial markets. An investor can buy either a short-term bond and reinvest proceeds until the desired maturity or buy a long-term bond of the desired maturity. If these alternatives are identical, then their expected returns should also be identical. Hence, the long-term yield should be an average of expected future short-term yields. In reality though, these alternatives present different risks and costs, which imply that the long-term yield equals the expected average future short-term yield plus a risk premium.

The second feature in our model concerns the transmission from the risk premium to the economy. We consider an economy with two types of investors. The first can invest in both short- and long-term assets. For them, a lower risk premium prompts them to reallocate their portfolios, but doesn’t change their spending behavior. If all investors behaved this way, a change in the risk premium would not affect the economy.

The second type of investor buys only long-term bonds, for example to match asset duration with life events, such as retirement date. If long-term yields fall, these investors have less incentive to save and may allocate more money to consumption or investment in nonfinancial assets. This boosts aggregate demand and puts upward pressure on inflation.

These two types of investors represent a form of financial market segmentation, allowing for the risk premium to affect economic activity. The degree of segmentation is determined by what fraction of investors buy only long-term bonds. The higher the proportion of such investors, the more LSAPs affect the real economy.

Simulating the effects of QE2 on GDP and inflation

To examine the economic effects of an LSAP program similar to QE2, we run simulations based on U.S. macroeconomic data from the third quarter of 1987 to the third quarter of 2009. We assume that the Fed’s purchase program lasts five years, gradually accumulating $600 billion of long-term Treasury securities in the first year, holding them for two years, and gradually reducing them over the last two years. We further assume that forward guidance states that the central bank will keep the policy interest rate at zero for the program’s first four quarters. 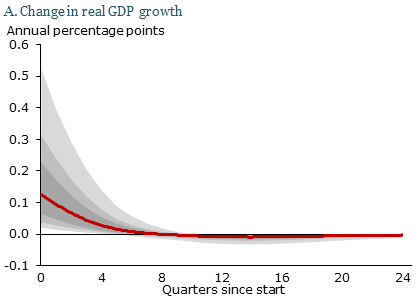 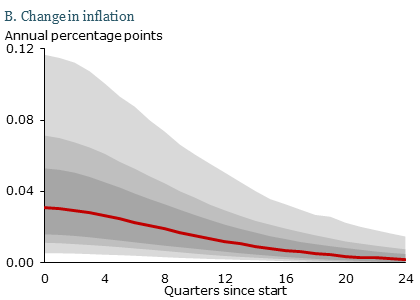 Our model estimates that such a program lowers the risk premium by a median of 0.12 percentage point. Figure 1 shows the program’s effects on real GDP growth and inflation. The red line is the median effect in annualized percentage points. The shaded areas represent probability bands from 50% to 90% around the median. The estimates reflect uncertainty arising from three factors: the sensitivity of the risk premium to the asset purchases, the degree of investor segmentation, and other model parameters influencing the economy’s response to interest rate changes.

The 0.13 percentage point median impact on real GDP growth fades after two years. The median effect on inflation is a mere 0.03 percentage point. To put these numbers in perspective, QE2 was announced in the fourth quarter of 2010. Real GDP growth in that quarter was 1.1% and personal consumption expenditure price index (PCEPI) inflation excluding food and energy was 0.8%. Our estimates suggest that, without LSAPs, real GDP growth would have been about 0.97% and core PCEPI inflation about 0.77%.

Chung et al. (2011) find effects about twice as big. Baumeister and Benati (2010) find marginal effects on GDP and inflation of about 3 percentage points and 1 percentage point respectively. Both studies use different methods and assumptions regarding the risk premium. The results of Chung and co-authors fall inside our 50% probability band. But our analysis assigns a negligible chance of LSAP effects as strong as those reported in Baumeister and Benati. Our effects are more limited because the data do not support much bond market segmentation. Thus, we find only modest economic impact.

It’s possible that our data sample excludes periods of high financial turbulence that could encourage stronger financial segmentation. That could cause us to underestimate LSAP effects, particularly during the first few asset purchase rounds. To evaluate this, we run our simulation with at least a 5% degree of segmentation. In our first simulation, the probability of at least that level of segmentation is only 50%. With at least 5% segmentation, the impact on real GDP growth nearly doubles to 0.22 percentage point. The effect on inflation remains only about 0.04 percentage point.

Fed interest rate policy plays an important role in determining the effects of LSAPs on economic growth. The Fed normally sets a higher federal funds rate target in response to higher inflation or economic growth. Thus, if LSAPs boost the economy, they should lead to a higher federal funds rate, offsetting the stimulus. In our simulation, we assume that the FOMC keeps the rate at zero for four quarters and then follows conventional monetary policy. 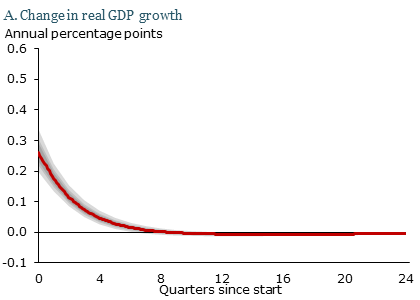 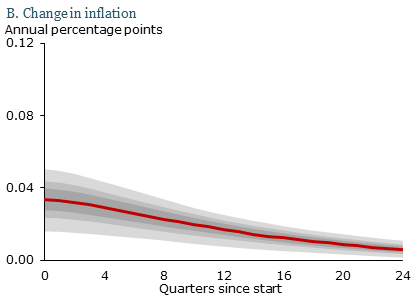 Asset purchase programs like QE2 appear to have, at best, moderate effects on economic growth and inflation. Research suggests that the key reason these effects are limited is that bond market segmentation is small. Moreover, the magnitude of LSAP effects depends greatly on expectations for interest rate policy, but those effects are weaker and more uncertain than conventional interest rate policy. This suggests that communication about the beginning of federal funds rate increases will have stronger effects than guidance about the end of asset purchases.

Vasco Cúrdia is a senior economist in the Economic Research Department of the Federal Reserve Bank of San Francisco.

Andrea Ferrero is a senior economist at the Federal Reserve Bank of New York.