Financial liberalization in China has broad implications, including changing how its central bank’s monetary policy affects the nation’s economy. An estimate of Chinese economic activity and inflation based on a broad set of indicators suggests that the way policy is transmitted to China’s economy has become more like Western market economies in the past decade. Although Chinese monetary policy may actually have exacerbated its economic downturn during the global financial crisis, a move toward stimulatory policy has helped ease its slower growth more recently.

China’s economy has experienced remarkable structural and institutional changes in recent decades. These changes may alter the efficacy of countercyclical monetary and fiscal policy on Chinese economic activity and inflation. Many studies (for example, Geiger 2006 and He et al. 2013) have found that market-oriented policies, such as changes in interest rates and reserve requirements, were relatively less important in China than more direct credit policies, such as “window guidance” for commercial bank lending levels. However, ongoing developments in China’s financial sector should, at some point, lead China’s monetary transmission mechanism to look more similar to that in the U.S. and other Western market economies (as described in, say, Bernanke and Blinder 1992).

Motivated by the evolving financial system, a recent study by Fernald, Spiegel, and Swanson (FSS 2014) re-examines the Chinese monetary transmission mechanism. FSS use a statistical model developed by former Federal Reserve Chairman Ben Bernanke and others to analyze U.S. monetary policy (Bernanke and Boivin 2003 and Bernanke, Boivin, and Eliasz 2005). Known as a FAVAR model, this approach uses numerous related data series to alleviate concerns that individual data might suffer measurement error or be inconsistently available. Using this approach with recent data, FSS find that interest rates and reserve requirements are more important than direct quantity measures of lending, in contrast to earlier findings.

In this Economic Letter, we summarize the findings in FSS. We then extend the data sample to assess Chinese monetary policy during the country’s recent modest economic slowdown. Our results indicate that policy has played a stimulatory—and hence smoothing—role during the slowdown.

A challenge when examining China’s monetary transmission mechanism is the quality of Chinese data, which are often considered questionable (Holz 2008, Nakamura et al. 2014, and Fernald, Hsu, and Spiegel 2014). The approach in FSS overcomes this obstacle by using a large number of economic indicators to estimate two unobserved factors that drive the systematic component of the data, representing output and inflation. This allows the incorporation of data series with potentially large measurement errors, and it minimizes ad hoc decisions about which data best capture the true movements in the Chinese economy. Indeed, Bernanke and Boivin (2003) and Bernanke et al. (2005) found that this approach provided better empirical estimates for the U.S. economy by incorporating the wide variety of output and inflation measures available.

In addition, because of the rapid institutional and structural change in China, it is important to focus on recent data. For example, data from the 1990s may not be relevant for understanding the current Chinese economy. FSS focus on data since 2000. Importantly, that includes the global financial crisis as well as the first half of 2014.

In a country with well-developed financial markets, monetary policy affects the economy through market-oriented channels. For example, when the Federal Reserve adjusts its target for the interest rate on overnight loans between banks, all market rates throughout the economy adjust. Those changes, in turn, influence economic activity and, eventually, prices. In contrast, in China during the 1990s, market-based monetary policy instruments—including changes in interest rates—were generally considered inadequate to control China’s economy due to the slow pace of reform in the banking and financial sectors. As a result, studies of this period suggest that interest rate policies pursued by the People’s Bank of China (PBOC) had little, if any, impact on the real side of the Chinese economy (see Geiger 2006 and He et al. 2013). Instead, policymakers used more direct credit policies, such as “window guidance” by the PBOC, under which credit expansion was managed by direct control over the volume of commercial bank lending.

As the 1990s came to a close, however, financial liberalization in China appeared to increase the impact of monetary policy—particularly interest rate policies—on the real side of the Chinese economy. The impact of nonmarket policies such as window guidance may diminish as the financial sector develops, in favor of more standard instruments, such as policy interest rates. Still, financial liberalization is incomplete, in that China still sets ceilings on bank deposit rates and floors on lending rates (Liao and Tapsoba 2014). Thus, how standard China’s monetary transmission mechanism currently is remains an open question.

To investigate this issue, FSS incorporate estimates of the Chinese output and inflation factors into a standard statistical model of how monetary policy affects the economy, known as a vector-autoregression (VAR). The combination is known as a factor-augmented VAR, or FAVAR. Under this approach, we use a statistical method known as principal components to boil down a relatively large number of data series into two factors corresponding to economic activity and inflation. Creating these summary indexes greatly simplifies the statistical analysis of how changes in policy affect the economy over time. We update the set of 34 indicators used by FSS for Chinese output and inflation with data through June 2014. In addition to economic activity and inflation factors, we include three PBOC “policy variables”: the quantity of bank lending, bank reserve requirement levels, and a benchmark short-term interest rate set by the PBOC. The first variable captures changes in the PBOC’s window guidance. In principle, changes to any variable can affect all the other variables, but some respond more quickly than others. These differences help us identify policy changes. 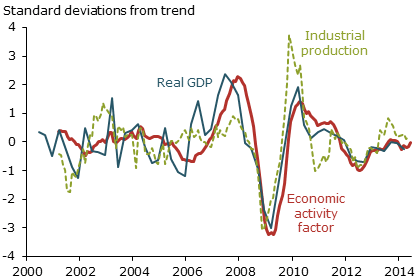 Figure 1 presents estimates of our Chinese economic activity factor measured from detrended monthly changes in underlying indicators. The figure also shows China’s GDP growth, reported as four-quarter growth rates, and monthly growth rates for industrial production. For the latter two, we removed a slow-moving trend and rescaled them to have the same standard deviation. Clearly, all three series move together, albeit imperfectly. For example, although industrial production is one of the variables used to construct the economic activity factor, changes in industrial production before 2008 were only weakly related to economic activity or GDP growth. Our factor captures well China’s slowdown during the 2007–09 global financial crisis and its subsequent recovery. It is apparent that, while China weathered the economic downturn better than most countries, it also was hard-hit by the global downturn. 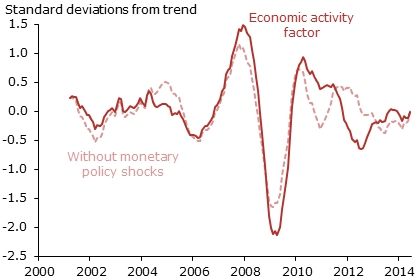 Our model allows us to analyze the role of countercyclical policy during and since the global financial crisis. In Figure 2, the solid line shows the economic activity factor; the dashed line shows our model’s predictions of how that factor would have evolved had we “turned off” the monetary policy shocks, namely the innovations to the short-term interest rate and reserve requirements.

Surprisingly, we find that China’s relatively strong performance during the global financial crisis was not attributable to countercyclical monetary policy. That is, when we remove our estimated interest rate and reserve ratio innovations, our model predicts that China’s economy actually would have performed better during the crisis. The reason is timing: China was tightening monetary policy early in 2008. Given that changes in monetary policy feed through to the underlying economy with a lag, the contractionary effects hit the economy between late 2008 and 2009—exacerbating the effects of the global financial crisis on China. This illustrates the challenges of countercyclical monetary policy.

More recently, many commentators have noted China’s slowing economy. The dashed line shows that from about mid-2013 through the end of our sample in mid-2014, Chinese monetary policy has been modestly stimulatory. That is, monetary policy appears to have mitigated the depth of the country’s slowdown, in that our model predicts that economic activity would have been lower without monetary policy intervention. This stimulus comes primarily from changes in reserve requirements, since interest rates were unchanged from December 2010 through June 2014.

This Letter extends the statistical methods in Fernald, Spiegel, and Swanson (2014) to assess the impact of Chinese monetary policy on its economy. This FAVAR model addresses the data quality challenges posed by the Chinese economy, allowing us to incorporate a broad variety of poorly measured data. This method also allows us to examine the dramatic recent changes in the Chinese financial and economic systems, as it can be estimated on short data series.

According to our model, China’s monetary transmission mechanism is beginning to look more standard relative to Western market economies. In particular, interest rate and reserve requirement policies appear to play a more substantive role in determining both real economic activity and prices. As China continues to liberalize its financial sector, these standard monetary policy instruments are likely to gain further importance.

We also use our model to assess how Chinese monetary policy has affected its economic activity. We find that monetary policy exacerbated the severity of China’s modest downturn during the global financial crisis, primarily because the PBOC appears to have tightened policy just before the crisis hit. This illustrates the challenges faced in pursuing countercyclical policy. Nevertheless, we find that Chinese monetary policy has become more stimulatory recently, which may have helped ease its recent modest downturn in economic activity.

Eric Hsu is a research associate in the Economic Research Department of the Federal Reserve Bank of San Francisco.