Is China’s Growth Miracle Over?

The recent slowdown in China’s growth has caused concern about its long-term growth prospects. Evidence suggests that, before 2008, China’s growth miracle was driven primarily by productivity improvement following economic policy reforms. Since 2008, however, growth has become more dependent on investment and overall growth has slowed. If the recent reform plans can successfully address the country’s structural imbalances, China could maintain a solid growth rate that might help smooth its transition to high-income status.

China’s economy grew 10% per year for over 30 years beginning in the early 1980s. No other country in modern history has achieved such exceptional growth for so long. Before the global financial crisis, China’s growth was primarily driven by productivity gains. Since 2008, however, growth has slowed and become increasingly dependent on investment.

Because China has been a large and expanding market for other countries, its growth prospects have important implications not just for the Chinese people but also for the global economy. This Letter examines the sources of China’s growth and some factors contributing to the recent slowdown, and offers a cautiously optimistic view of China’s future growth.

Since the early 1980s, China’s open-door policy and economic reforms have led to a remarkable growth performance. As Figure 1 shows, China’s real GDP grew about 10% per year on average for 30 years before the recent slowdown. At that rate, national income doubles every seven years. No other country in modern history has achieved such high growth for so long. 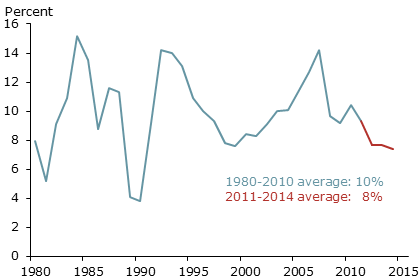 Rapid economic growth has significantly raised the living standards of the Chinese people. According to data from the Penn World Tables, China’s real GDP per person rose steadily from around 5% of the U.S. level in 1980 to about 20% in 2011. The World Bank estimates that, during the same period, over 600 million people in China have been lifted out of extreme poverty, defined as living for under $1.25 per day.

Theory suggests that three factors contribute to economic growth: capital accumulation, labor force expansion, and productivity improvement. Empirical evidence in China’s case suggests that growth in the third factor, known as total factor productivity, has been an important contributor to the three-decade growth miracle (see Zhu 2012). A series of domestic economic reforms beginning in the 1980s led to more efficient allocations of capital and labor and also better aligned private incentives. The open-door policy attracted foreign direct investment, which in turn brought new management practices, technological know-how, and access to the world market for Chinese businesses. These policy changes boosted productivity. As productivity improved over time, investment and production expanded. Although capital investment also contributed to growth, its contribution is limited by diminishing returns and thus, investment cannot be the main driving force of sustainable growth.

Figure 2 shows the contribution of each of the three factors to China’s growth since 1980. The calculation follows the growth accounting approach described by Zhu (2012), with China’s labor income share fixed at 0.5. The data for real GDP, employment adjusted for human capital levels measured by years of schooling, and capital stocks are taken from the latest version of the Penn World Tables (version 8.1; see Feenstra, Inklaar, and Timmer 2015 for a summary of the data). 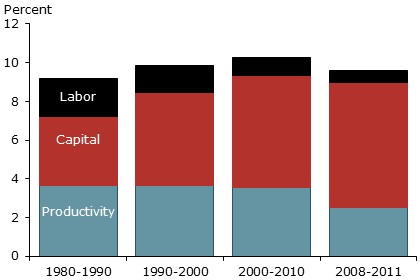 As shown in Figure 2, China’s rapid growth was driven mostly by productivity gains and investment rather than employment growth. For example, out of the roughly 10 percentage points of average growth in the 1990s, capital accumulation accounts for about half of it, productivity improvement accounts for another 4 percentage points, and employment gains account for the remaining 1 percentage point. Labor’s limited role in part reflects China’s one-child policy that limits population growth and restrictive policies on internal migration, such as the “Hukou” system that restricts citizens’ abilities to work in cities other than where they were born. The figure also reveals a significant decline in the contribution of total factor productivity since 2008. Accordingly, China’s growth has become more dependent on capital investment in this more recent period.

During the global financial crisis, demand for Chinese exports fell substantially. Meanwhile, waning productivity gains presented further challenges for sustaining high growth. The Chinese government responded to the crisis by adopting a large-scale fiscal stimulus package, which was announced in November 2008 and implemented quickly in 2009 and early 2010 (Wong 2011; Faust, Lin, and Luo 2012). This policy accommodation significantly boosted investment growth, especially in targeted areas such as infrastructure and construction, and led to short-run booms in output in 2009 and 2010. Nonetheless, growth has slowed substantially since 2011. The average growth rate between 2011 and 2014 was about 8% (see Figure 1). Growth slowed further to 7% in the first two quarters of 2015, and the Chinese government officially lowered its growth target to 7% for the year. Although this rate is still quite remarkable by international standards, it is significantly lower than the 10% average recorded in the previous three decades.

The recent slowdown has raised the concern that China might be falling into a pattern commonly referred to as the “middle-income trap” (see, for example, Eichengreen, Park, and Shin 2011). Historically, fast-growing countries have often fallen into such a trap, in which growth slows sharply as income reaches a threshold level and wages rise sufficiently to erode a country’s comparative advantage.

However, some countries have successfully avoided the middle-income trap and moved to high-income status, which the Organization for Economic Co-operation and Development defines as GDP per capita of $12,500 based on 2011 constant international prices. These include China’s neighboring countries Japan and South Korea. In the 1960s, Japan had per capita real GDP of about $6,000 and an average growth rate of over 10% (see Figure 3). In subsequent decades, however, Japan’s GDP per capita rose and its growth slowed. By 2011, Japan’s GDP reached over $30,000 per capita and growth slowed to about 1.25%. South Korea has followed a similar path since the 1980s. 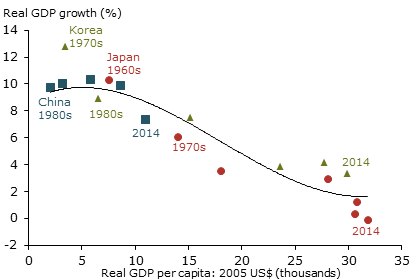 This may appear to be quite a pessimistic scenario for China, but China’s long-term growth prospects are challenged by a number of structural imbalances. These include financial repression, the lack of a social safety net, an export-oriented growth strategy, and capital account restrictions, all of which contributed to excessively high domestic savings and trade imbalances. According to the National Bureau of Statistics of China, the household saving rate increased from 15% in 1990 to over 30% in 2014. High savings have boosted domestic investment, but allocations of credit and capital remain highly inefficient. The banking sector is largely state-controlled, and bank loans disproportionately favor state-owned enterprises (SOEs) at the expense of more productive private firms. According to one estimate, the misallocation of capital has significantly depressed productivity in China. If efficiency of capital allocations could be improved to a level similar to that in the United States, then China’s total factor productivity could be increased 30–50% (Hsieh and Klenow 2009).

If these reform blueprints can be successfully implemented, then China should be able to avoid the middle-income trap and sustain long-term growth at a reasonable pace. In the transition process, however, structural reforms may contribute to a slowdown in economic growth.

China’s growth is expected to slow further in the coming years. The International Monetary Fund (IMF) forecasts that growth will be about 6.8% for 2015. With an aging population, slowing productivity growth, and the policy adjustments required to implement structural reforms, growth is projected to slow further to 6.3% in 2016 and 6% by 2017.

Despite the slowdown, there are several reasons for optimism. First, China’s existing allocations of capital and labor leave a lot of room to improve efficiency. If the proposals for financial liberalization and fiscal and labor market reforms can be successfully put in place, improved resource allocations could provide a much-needed boost to productivity. Second, China’s technology is still far behind advanced countries’. According to the Penn World Tables, China’s total factor productivity remains about 40% of the U.S. level. If trade policies such as exchange rate pegs and capital controls are liberalized—as intended in the reform blueprints—then China could boost its productivity through catching up with the world technology frontier. Third, China is a large country, with highly uneven regional development. While the coastal area has been growing rapidly in the past 35 years, its interior region has lagged. As policy focus shifts to interior region development, growth in the less-developed regions should accelerate. With the high-speed rails, airports, and highways already built in the past few years, China has paved the way for this development. As the interior area catches up with the coastal region, convergence within the country should also help boost China’s overall growth (Malkin and Spiegel 2012).

Continued robust growth in China would be beneficial for the global economy as well. China’s market for U.S. exports has grown steadily from 4% in 2004 to over 7% in 2014. According to an IMF estimate, China contributed about one-third of the world’s growth in 2013.

China’s growth miracle since the early 1980s has significantly raised the standards of living in China. It has also made China an increasingly important contributor to world economic growth and a large and growing market for U.S. exports. The rapid growth was driven primarily by productivity gains and capital investment. The recent growth slowdown has raised the concern that China’s growth miracle could be ending.

However, if the structural reform plans from China’s Third Plenum can be successfully implemented, then the recent slowdown could be a smooth transition rather than a hard landing. This gives a reason for optimism that China will avoid the middle-income trap and follow the paths of Japan and South Korea to achieve high-income status.