In response to the global financial crisis and the resulting fallout in the U.S. economy, the Federal Open Market Committee (FOMC) held the target federal funds rate close to zero for seven years, ending in December 2015. During much of that time, the combination of constraints on monetary policy from the lower bound on interest rates and FOMC communications about the likely future course of policy fostered expectations that the federal funds rate was unlikely to change for at least a year or two, irrespective of economic developments. As the economy gradually improved, expectations of a first rate hike neared and Fed communications turned to stressing that policy decisions were data dependent. This Economic Letter examines the extent to which market-based views of future Fed policy have become more data dependent, consistent with Fed communications.

The FOMC sets the federal funds rate with a keen eye on economic and financial conditions and the outlook for the economy. In “normal” times, when interest rates are not near zero, it typically raises or lowers the target for the federal funds rate when the economy—meaning employment and inflation—is running too hot or too cold, respectively. This pattern of behavior causes investors to update their views on future policy actions based on incoming economic data. For example, if readings on job growth come in stronger than expected, financial market participants would expect interest rates to be higher in the future than they previously thought. As a result, market-based measures of future interest rates, such as yields on Treasury securities, typically would increase in response to good economic news, while disappointing news on the economy would tend to cause expectations of future rates to fall.

The usual pattern of market reactions to economic news can be short-circuited when the federal funds rate is near zero and is expected to stay there for a long time (Swanson and Williams 2014a). For example, if the economy is mired in a deep recession or inflation is very low, monetary policy is constrained in how much stimulus can be added by lowering interest rates. In that case, a single strong report on jobs or inflation is unlikely to be enough to call for a rate hike in the next year or so. Similarly, a disappointing reading on the economy won’t affect expectations of interest rates over the next year or so either, since the Fed has little room to lower rates further. As a result, market-based measures of future interest rates are unlikely to react much to news, that is, they become less data dependent.

Financial market responses to economic news became more muted during the period of near-zero interest rates. However, there are signs that the responsiveness to news has been moving back toward more normal levels in the past year or so. To see this, it’s useful to compare three different periods. The first is the 1990s, when interest rates never fell close to zero. This provides a benchmark for comparison. The second period is 2010 through 2014. This covers the time after the worst of the financial crisis, when interest rates were close to zero and the Fed was communicating that rates would stay low. We exclude 2008 to 2009 from this period because financial markets were extremely volatile during the depths of the crisis, making inferences about future policy expectations from market data problematic. The third, most recent period is 2015 through March 2016, when the talk by and about the Fed increasingly turned to rate hikes and data dependence.

We use the method developed by Swanson and Williams (2014a) to examine how the magnitudes of market responses to macroeconomic news change over the three periods (see Swanson 2013 for a more detailed explanation of this method). We focus on the responses of yields on six-month, one-year, and two-year U.S. Treasury notes, which are closely related to market expectations of the average level of short-term interest rates over the next six months, one year, and two years, respectively.

Figure 1 shows the average magnitude of market responses of Treasury yields to major macroeconomic news releases, relative to that in the benchmark period of 1990–2000, for which the blue bars are set to 1. A bar equal to 1 would indicate the average response of that yield to news over that period is the same in absolute value as during the benchmark period. A bar below 1 would show that yields are less responsive to news than during the benchmark period, and a value of zero would indicate that the yields did not respond at all to news on average over the period. 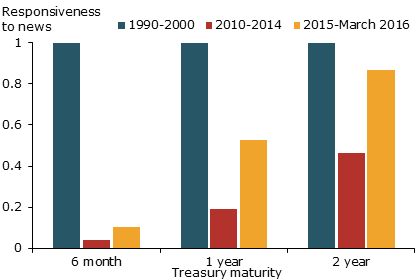 This diminished responsiveness of yields to economic news over the 2010–2014 period appears consistent with the views of private-sector economists, who generally believed that it would be at least one year before the FOMC was likely to start raising rates. Figure 2 shows the average expected number of quarters until the Fed would begin raising rates from near zero, known as “liftoff,” based on various surveys of economists from 2009 to 2015. In 2010 and the first half of 2011, a typical view was that the Fed would start raising rates in about a year. Starting in August 2011, when the FOMC significantly strengthened its use of forward guidance, expectations for liftoff were pushed back to two or more years in the future. As the economy continued to improve in 2014, public expectations of the time until the first rate hike shortened considerably. 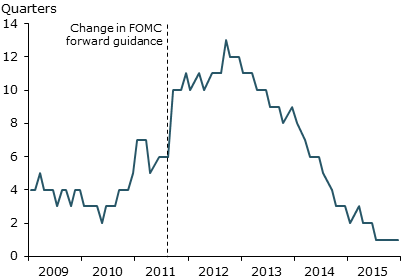 The return of data dependence

Starting in 2015, FOMC communication shifted from stressing the need for very low interest rates to laying the groundwork for eventual monetary policy normalization. For instance, the statement issued after the March 2015 FOMC meeting noted, “The Committee anticipates that it will be appropriate to raise the target range for the federal funds rate when it has seen further improvement in the labor market and is reasonably confident that inflation will move back to its 2 percent objective over the medium term” (Board of Governors 2015). FOMC communication increasingly stressed the data dependence of future decisions. In March 2015, Federal Reserve Chair Yellen stated, “the timing of the first increase in the federal funds rate and its subsequent path will be determined by the Committee in light of incoming data.” (Yellen 2015). Private-sector forecasters expected the first rate hike to occur that year. The FOMC ultimately made the first rate increase in December 2015.

With the economy on the mend and FOMC communications emphasizing the data dependence of policy actions, market-based measures of future interest rates became more responsive to economic news. As seen in Figure 1, the responsiveness of six-month yields has increased only modestly, reflecting the fact that interest rates were still near zero for most of the latest period. The responsiveness of the longer yields to news increased more significantly, with responses of two-year yields returning to about three-fourths of their 1990s baseline level. This larger increase reflects investor expectations that rates will move further away from zero over the subsequent two years.

The responsiveness of market-based measures of expected future interest rates to economic news has not yet returned to the levels we saw in the 1990s. This is in part because the federal funds rate has not yet risen above 50 basis points, so the lower bound still shapes policy expectations. In addition, FOMC communications have emphasized that the path of interest rates is likely to be gradual, which may have muted the perceived responsiveness of policy to news.

The same pattern of decline and then return of data dependence is visible in market-based measures of uncertainty about the future path of monetary policy. During the 2010–2014 period, the degree of uncertainty about the future level of short-term interest rates was very low. Based on options prices of Eurodollar rates—a measure of expected future prices for U.S. dollar-denominated deposits offshore that are closely related to the federal funds rate—uncertainty about interest rates one year in the future was about one-third the level that prevailed in the 1990s (Williams 2016). This low level of uncertainty reflected market participants’ belief that the Fed was unlikely to change short-term interest rates in the next year, regardless of economic developments. Since 2014, this measure of policy uncertainty increased to about half of its 1990s level, reflecting a partial return to normal levels of data dependence in market perceptions of monetary policy.

This pattern of falling then rising data dependence in market measures of future policy is not unique to the United States; it can also be seen in the United Kingdom (Swanson and Williams 2014b, Williams 2016). The Bank of England lowered its policy rate to its effective lower bound in 2009 and, although it has yet to raise this rate, market expectations are that it will this year. Repeating our analysis using data from the United Kingdom yields very similar results: For 2010–2014, the responsiveness of bond yields to economic news and measures of policy uncertainty are significantly attenuated. As with the United States, there are signs of a return to data dependence in the United Kingdom since 2014.

Board of Governors of the Federal Reserve System. 2015. “Press Release.” March 18.

Swanson, Eric T., and John C. Williams. 2014b. “Measuring the Effect of the Zero Lower Bound on Yields and Exchange Rates in the U.K. and Germany.” Journal of International Economics 92(S1), pp. 2–21.