Why Are Long-Term Interest Rates So Low?

Despite recent increases, long-term interest rates remain close to their historical lows. A variety of structural factors, notably slower productivity growth and a surplus of global saving, likely have lowered expectations of steady-state interest rates and pushed down long-term yields through the expectations component. In addition, accommodative monetary policy in the United States and abroad appears to have lowered the term premium on long-term bonds.

Last summer, the interest rate on the 10-year Treasury security fell to a new historic low of 1.37%. Despite moving up in recent months, long-term Treasury yields remain very low by historical standards. Figure 1 shows the evolution of 10-year interest rates in the United States and abroad. Understanding why interest rates are low can shed some light on their likely future course as well as on the broader outlook for the U.S. economy. For example, long-term rates could be low because investors have a gloomy economic outlook and anticipate low rates of inflation and output growth to persist. On the other hand, to the extent that foreign monetary policy or strong demand for Treasuries from abroad have pushed down long-term rates, the low rates may be more temporary but the associated accommodative financial conditions could help boost aggregate demand and imply a more positive outlook for our economy. 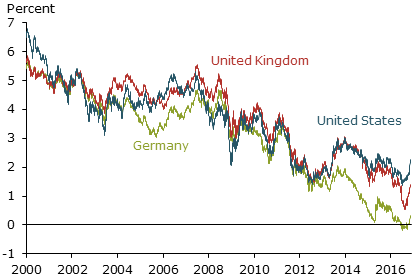 To understand why rates are low, it is useful to consider the two key components of long-term interest rates. The first is the average of expected future short-term interest rates—the “expectations component.” The second component is the “term premium,” which includes compensation to investors for the risk of holding long-term bonds but is also a catch-all for other factors beyond the expectations component that affect long-term rates. This Economic Letter examines some of the factors underlying each of these two components in order to gauge the main drivers of recent low rates. The evidence suggests that both the expectations component and the term premium have played important roles in holding down long-term yields and that these factors seem unlikely to reverse course much more in the near term.

Expectations and the neutral interest rate

The longer-run expectations are determined by the perceived level of the “neutral” nominal interest rate—the rate consistent with an economy that has returned to its long-run growth trend and inflation target. This neutral rate appears to have shifted lower in recent years. For example, in the September 2016 release of the Fed’s Summary of Economic Projections (SEP), the median projection of the long-run federal funds rate was 2.9%, which is well below the median SEP projection of 4.25% in early 2012.

Why has the neutral interest rate declined? This rate is the sum of long-run inflation expectations and the neutral real, or inflation-adjusted, interest rate. Surveys of forecasters show that long-run expectations of inflation have been stable for the past decade at 2%, the long-run target set by the Fed. Therefore, the decline in the longer-run expectations component was driven mainly by a lower neutral real rate. The neutral real rate, also referred to as natural or equilibrium rate of interest, is difficult to pin down precisely, but three estimates are shown in Figure 2. These are based on three alternative statistical models by Laubach and Williams (2015), Lubik and Mathes (2015), and Johannsen and Mertens (2016). While the estimates differ over time, on average, they have decreased by about 2 percentage points over the past 15 years. This decline in the neutral real rate appears to have contributed substantially to the decrease in long-term nominal interest rates. 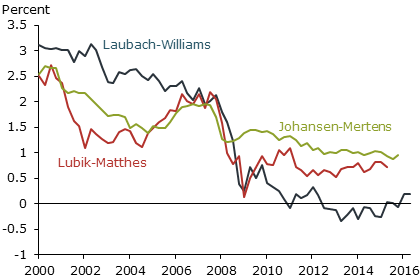 The term premium component of long-term interest rates also declined substantially in recent years. Figure 3 shows three alternative estimates of the term premium in the 10-year Treasury yield, based on the statistical models of Adrian, Crump, and Moench (2013), Kim and Wright (2005), and Christensen and Rudebusch (2012). These models incorporate information from the historical behavior of interest rates and, in some cases, from forecast surveys. The differences among the individual model estimates at any point in time suggest how difficult it is to pin down the term premium. Still, all three estimates moved lower, especially since the financial crisis in 2008. This is consistent with the standard view that term premium movements are mostly cyclical as risk premiums decline during expansions and rise during recessions. 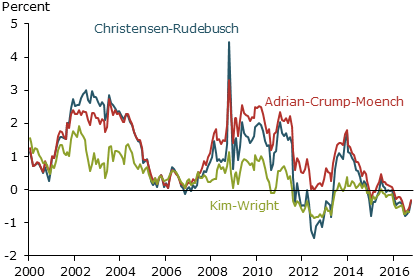 All three term premium estimates have turned negative this year. From a theoretical perspective, usually when investors worry about inflation risk, they require additional compensation for holding nominal bonds and the term premium is positive. But when low inflation or even deflation is an important concern, bonds can be viewed as an insurance against this risk, resulting in a negative term premium (Campbell, Sunderam, and Viceira 2013).

Several factors may have contributed to the low level of the term premium. Domestically, the Fed’s quantitative easing after the financial crisis reduced the supply of longer-term bonds available to the market, which lowered the term premium (Bauer and Rudebusch 2014). This downward pressure on the term premium appears likely to continue for several more years.

Developments abroad have also affected the U.S. term premium. During times of increased global uncertainty and financial market volatility, foreign investors often prefer U.S. Treasury securities as a safe haven, pushing up their prices and lowering the term premium. For example, earlier this year, uncertainty around the United Kingdom’s referendum to leave the European Union, known as Brexit, led to such a flight-to-safety demand and notable declines in yields. Still, given recent positive returns in many global stock markets, it is unlikely that a shift from risky assets toward safer ones is the whole story. Instead, both falling yields and rising stock prices may reflect the accommodative monetary policies by the Bank of England, the European Central Bank, and the Bank of Japan, which aim to offset stagnant output growth and subdued inflation. The associated extremely low interest rates in those areas pushed investors in search of higher yields to U.S. Treasuries. Partly as a result, U.S. yields have followed foreign yields in moving lower, as shown in Figure 1. Indeed, the New York Fed’s Survey of Primary Dealers in July cited “spillovers from low/declining yields abroad” as the most important factor for declines in long-term Treasury yields early this year. Thus, the divergence between tighter Fed policy and the continued easing by foreign central banks is an important factor contributing to low U.S. interest rates. As this policy divergence persists, it is likely to weigh on U.S. long-term interest rates for some time.

Evidence points to a substantial decline in expectations of future short-term interest rates and also a reduced term premium as contributing to recent low long-term Treasury yields. The apparent decline in the neutral real rate, which is driven by persistent structural factors, suggests a low new normal for interest rates. Similarly, the term premium appears to have fallen significantly in recent years and seems unlikely to reverse course much in the near term as very accommodative monetary policy continues abroad. Therefore, while the ongoing economic recovery and normalization of monetary policy in the United States should lead to some increases in long-term interest rates, these seem likely to be fairly moderate for the foreseeable future. The implication for the U.S. economy is that, although trend growth and the neutral interest rate are low, the compression of the term premium by monetary policy here and abroad should stimulate aggregate demand and support a continued healthy recovery.

Fischer, Stanley. 2016. “Why Are Interest Rates So Low? Causes and Implications?” Speech at the Economic Club of New York, October 17.