Job mobility in the United States has been slowing for almost two decades. The most prominent measure of mobility is direct transitions from one job to another. This measure has declined substantially among young workers ages 16 to 24 since the late 1990s, which helps explain the majority of the overall decline in job-to-job transition rates. However, for workers ages 25 and older, the labor market is essentially as dynamic today as it was 20 years ago.

Job mobility—the ability of workers to move easily from one job to another—is commonly linked with economic opportunity. High job mobility in the United States has long been regarded as an advantageous feature. A fluid labor market serves as an important engine of economic and social mobility by enabling workers to change jobs for higher compensation, better work conditions, and opportunities for advancement. However, the aggregate rate at which people leave one job for another has been falling for almost two decades. Some analysts suggest this may be a sign that the labor market has lost some of its dynamism.

People are constantly moving in and out of jobs. More people move from one job to another in a given month than move from unemployment into a new job. Job-to-job flows generally reflect the natural process of people shifting around to find the best job for their skill sets. In the process, these workers often secure higher wages, experiment with different jobs, and develop new skills. The fluidity of the U.S. labor market is envied by many economies around the world. However, as with other measures of dynamism, declining job-changing activity in the United States has raised concerns that the engine of opportunity is stalling (Davis and Haltiwanger 2014). Between 1997 and 2013, the most recent year of data available from the Census Bureau’s Survey of Income and Program Participation (SIPP), the rate at which people move out of one job and into another has declined just over 25%. In a typical month in 1997, nearly 3% of people over age 16 who were employed in one month had moved to a different job by the next month. By 2013 this had dropped to near 2% (see Figure 1 and Moscarini and Thomsson 2007). 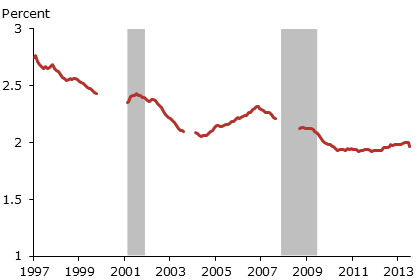 The decline has been gradual since 1997 and appears to be part of a secular trend distinct from the ups and downs of business cycles. That said, job-to-job transitions tend to move in accord with the business cycle. Expansions, for instance, tend to coincide with more job-to-job transitions. This is particularly evident during the strong expansion of 2004–07, which led to a temporary reversal of the downward drift. People changed jobs more frequently during the housing boom, reflecting greater economic opportunities, but this acceleration came to an end with the onset of the Great Recession. More recently, as the labor market has strengthened in general, there has been a modest pickup in job-to-job transitions.

Job-to-job transitions: The life cycle and over time

The reasons for and benefits from mobility change over a person’s life. Early in life, the mobility of a fluid labor market allows people to experiment and discover their skills and desired careers (Gervais et al. 2016). Later in life, when people are more established in their careers, mobility reflects the opportunity to find better employment and wage gains or to develop new skills at different tasks. Job-to-job transitions occur more frequently earlier in life. They are highest under the age of 22, then decline rapidly over the remainder of the 20s before stabilizing in the 30s and over the rest of a person’s work life.

Comparing the two lines in Figure 2 reveals a striking drop in the job-to-job movement of young workers between 1997 and 2012. The mobility rates for workers under age 21 dropped about 2 percentage points, from about 6% to about 4%. This stands in stark contrast to the stability in job-to-job mobility for people over age 30. The rate among people ages 40 to 44, for instance, was 1.9% in 1997 and 1.7% in 2012. By this measure, mobility is essentially unchanged since 1997 for a large majority of the workforce. 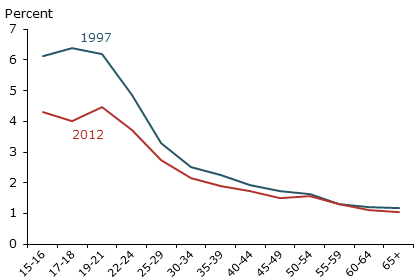 We consider an alternative scenario that holds job-to-job rates for all age groups constant at their 1997 levels, and calculate what the overall rate would have been through 2013 relative to the actual rates. In the alternative scenario, actual rates of employment for each demographic group follow the historical experience, and only job-to-job mobility is held fixed. In particular, young workers in this scenario retain their high rates of job-to-job transitions from 1997 through 2013. This scenario suggests that the overall job-to-job transition rate would have been 2.4% in 2013, instead of the actual 2% rate. This underscores the fact that mobility, by this measure, has not changed significantly for workers over the age of 25. 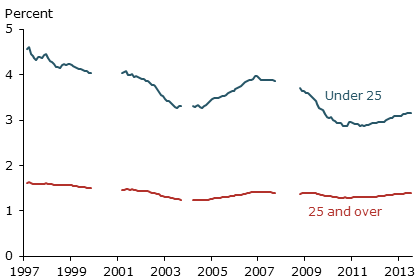 To gain some insight into the reasons for the declining job-to-job transition rates among young workers, Figure 4 breaks the under-25 group into rates for different occupation groups: services (red line), clerical and retail sales (green line), managerial and professional sectors including technicians, finance, and public safety (yellow line), and sectors such as transportation, construction, mechanics, mining, and farm work (blue line). Together, these sectors represented 95% of employment of the young in 2013. The main finding in the figure is that the decline in job mobility is prevalent across all occupations. It’s also apparent that the dispersion in the job-to-job rates across occupations in 1997 is no longer present by 2013.

Figure 4
Decline for the young similar across occupations 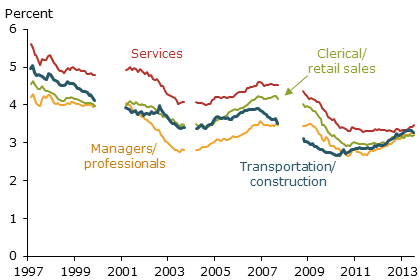 Possible explanations and consequences for the U.S. economy

Interpreting the decline in job mobility among the young and its implications for the future of the U.S. economy depends on the underlying explanations for this trend. We can only speculate at this stage. Some of the potential explanations raise concerns. For example, there has been a rising trend of young adults moving back home in recent years (Kaplan 2012). Whether this is a socially desirable development is unclear. While children gain some insurance against the rocky first years in the labor market by moving in with their parents, this may be at the cost of diminished experimentation with different jobs. Another concern is that technological changes that eliminate middle-level skilled jobs also eliminate opportunities for the young to develop and advance in their careers.

On the other hand, the decline in job mobility may be the result of improvements in the labor market rather than a symptom of deterioration. In a maturing economy, workers engage in longer periods of training and greater specialization. This could explain, in part, the trends we observe among young workers. As people earn advanced degrees, they are more likely to move directly into their career of choice and require less job experimentation. The probability of ending a job declines with tenure (Farber 1999). Thus, if young workers find the right job more quickly and stay in their positions longer, they may no longer experience as many job changes early in life. Finally, improved information technologies, such as job search and the screening of applications, have changed how people look for jobs (Stevenson 2009, Faber and Kudlyak 2016) and may have enabled better careers matches (Kuhn and Mansour 2014).

All in all, regardless of the decline in job-to-job mobility for younger workers, the continued fluidity of the labor market for the vast majority of the working population alleviates many of the concerns for the future functioning of the U.S. labor market.

Canyon Bosler is a graduate student at the University of Michigan and a former research associate at the Federal Reserve Bank of San Francisco.

Nicolas Petrosky-Nadeau is a research advisor in the Economic Research Department of the Federal Reserve Bank of San Francisco.

Faberman, Jason, and Marianna Kudlyak. 2016. “What Does Online Job Search Tell Us about the Labor Market?” FRB Chicago Economic Perspectives 40(1).

Gervais, Martin, Nir Jaimovich, Henri E. Siu, and Yaniv Yedid-Levi. 2016. “What Should I Be When I Grow Up? Occupations and Unemployment over the Life-Cycle.” Journal of Monetary Economics 83, pp. 54–70.