With the U.S. labor market at or near maximum employment, assessing trend job growth has become increasingly important. This “breakeven” rate, which is the pace of job growth needed to maintain a healthy labor market, depends primarily on growth in the labor force. Estimates that account for population aging and potential labor force participation trends suggest that trend growth ranges between about 50,000 and 110,000 jobs per month. Actual job growth has been well above this pace, implying that it can slow substantially in the future without undermining labor market health.

The number of new jobs created each month, as reported by the Bureau of Labor Statistics (BLS), always makes news headlines and is among the most highly anticipated pieces of U.S. economic data. By providing a snapshot of the overall labor market, it rivals GDP as a gauge of the economy’s momentum. In fact, the employment report’s monthly frequency makes it a timelier indicator of the state of the economy than GDP, which is quarterly. Over the past five years, monthly payroll job gains have averaged a little over 200,000. This is a strong pace relative to historical experience. Now that the labor market is at or near the Federal Reserve’s maximum employment goal, however, that pace is likely to slow (Williams 2016).

Given the likelihood that this rapid pace of job growth will slow, it’s important to consider what constitutes normal or “trend” growth. This is typically interpreted as the pace needed to maintain labor market health. In this Economic Letter, we provide some alternative estimates of trend job growth, focusing primarily on the role of labor force participation. Taking into account population aging and recent patterns in participation for broad age groups, we estimate that trend job growth ranges from about 50,000 to 110,000 per month. In light of this, job growth can slow substantially from its recent pace and still remain at or above trend.

Importantly, the trend growth rate does not simply reflect historical averages over specific time periods and hence is not directly observable. Job growth typically exceeds trend during economic expansions and drops below it during slowdowns, with outright job losses in a typical recession. This can be seen in Figure 1, which depicts actual and estimated trend job growth from 1960 through September 2015. Actual growth fluctuates widely around trend and has been well above it since 2012, indicating there is plenty of room for job growth to slow without undermining labor market health. 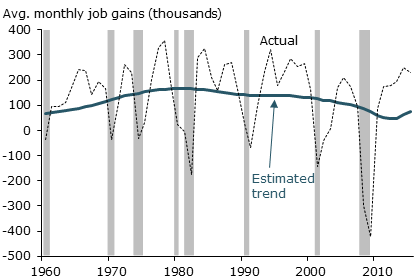 We calculate the trend rate of job growth by combining four primary elements (see Aaronson, Brave, and Kelly 2016 and FRB Atlanta 2016 for further details). The first two are the rate of population growth and the labor force participation rate, which is the share of the total population age 16 and over that is in the labor force—that is, employed or unemployed and actively seeking work. The product of these two elements is the rate of labor force growth. To maintain a given unemployment rate, trend job growth must be rapid enough to keep up with the growing labor force. Thus, the first two elements are combined with a third, an estimate of the natural rate of unemployment, to reflect a labor market at full strength. The final element is a minor technical adjustment to bridge the gap between the measurement of unemployment from the BLS monthly household survey and the measurement of payroll job gains from the larger, more reliable BLS establishment survey.

The solid line in Figure 1 depicts our estimate of historical trend job growth, averaged over multiple years to smooth out short-term fluctuations. Monthly trend growth rose from about 60,000 in 1960 to 160,000 in 1980, reflecting the twin boost to labor force growth from the expanding youth population and rising labor force participation by women. The estimate of trend growth was around 130,000 to 150,000 during the 1990s. This may be one underlying source of the common belief among economists that trend employment growth is still well above 100,000 (Zumbrun 2016). Trend growth was pulled to very low levels during the Great Recession of 2007–09 and its aftermath, falling to about 50,000 due to the unusually large declines in labor force participation. It has rebounded somewhat since then to about 75,000 jobs per month.

The role of labor force participation

Figure 2 displays historical participation rates for younger (16–24) and prime-age (25–54) people in panel A and older (55–64 and 65+) people in panel B. We group men and women together for simplicity and because the recent age-group specific trends have been similar for both genders. Since 2000, participation rates have trended downward for prime-age and younger people, particularly during economic downturns. Participation rates have risen for older people but flattened on balance following the Great Recession, perhaps due to improved retirement financing as the economy has recovered. The rate for individuals 65 and over is very low relative to the other age groups, reflecting typical retirement decisions as workers reach their mid-60s. 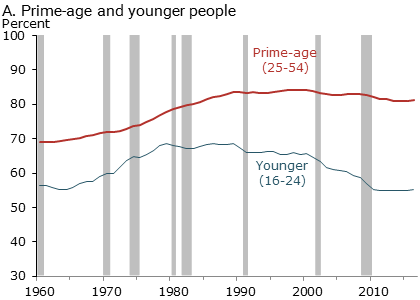 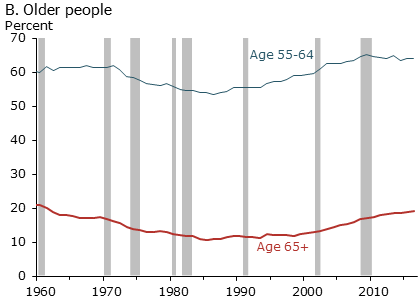 Beyond the aging of the population, a decline in participation among people under age 55 has intensified the downward pressure on overall labor force participation and trend employment growth. Falling participation for prime-age people depicted in Figure 2 appears to reflect in part a long-term decline in labor market opportunities for some worker groups. Similarly, for young people, the relative value of school versus work is likely to have risen, which has pulled them out of the labor force. For prime-age as well as young people, however, the trend decline in participation has halted or reversed somewhat of late, with flat participation for the young in recent years and a slight increase for the prime-age group. Substantial uncertainties surround these rates for the future.

Assessing the new normal: A range of estimates

To assess how much these labor force uncertainties translate to trend employment growth, we calculate trend growth under alternative assumptions about overall and group-specific participation rates. For these projections, we use Census Bureau population growth projections for the coming decade and the San Francisco Fed’s estimate of the natural rate of unemployment, which is currently 5%.

Figure 3 shows estimates under various scenarios. As a baseline for comparison, we assume that the overall labor force participation rate (LFPR) does not change, which yields a trend growth estimate of about 110,000 jobs (first bar). We then calculate the trend with constant labor force participation rates for the four age groups, with population aging captured by the underlying growth projections by age (second bar). Given the implied decline in the overall participation rate of about ¼ percentage point annually from population aging, the trend job growth estimate falls substantially to 57,000. This number could be even lower if prior declines in participation rates for prime-age and younger people reappear. 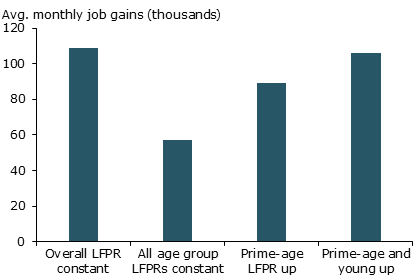 These calculations suggest that a return to trend employment growth that is well above 100,000 would require substantial participation increases for multiple age groups. Given the sustained participation declines since 2000 for prime-age and young people, this appears highly unlikely.

Falling labor force participation has reduced the trend rate of job growth needed to maintain full employment and is expected to continue doing so in the future. This largely reflects population aging, which mechanically reduces the overall participation rate because of the growing number of people reaching normal retirement age. With stable participation rates by age group, estimated trend growth is around 60,000 jobs per month. Further declines in participation rates for prime-age and younger people could reduce this number, perhaps even below 50,000. On the other hand, if the participation rate for prime-age people keeps rising and this is reinforced by an increase for young people, trend job growth could be pushed slightly above 100,000. While a great deal of uncertainty surrounds these projections, a key takeaway is that job growth can slow substantially from its pace in recent years and still be at or above trend, signaling continued labor market health.

Tim Mahedy is an economic analyst in the Economic Research Department of the Federal Reserve Bank of San Francisco.