Has the Dollar Become More Sensitive to Interest Rates?

Interest rates in the United States have diverged from the rates of other countries over the past few years. Some commentators have voiced concerns that, as a result, exchange rates might be more sensitive to unanticipated changes in U.S. interest rates now than they were historically. However, an examination of market-based measures of policy expectations finds no convincing evidence that the U.S. dollar has become more sensitive since 2014.

The paths of interest rates in the U.S. and other advanced foreign economies have diverged since 2014. In particular, interest rates in Europe have moved negative, while rates in the United States have increased (Figure 1). This divergence is largely due to the Federal Reserve signaling a path of raising policy rates, while the European Central Bank and other foreign central banks have been trying to provide additional monetary stimulus to their economies. Even though the Federal Reserve did not increase rates until December 2015, the anticipation of those events caused interest rates to start rising in 2014. 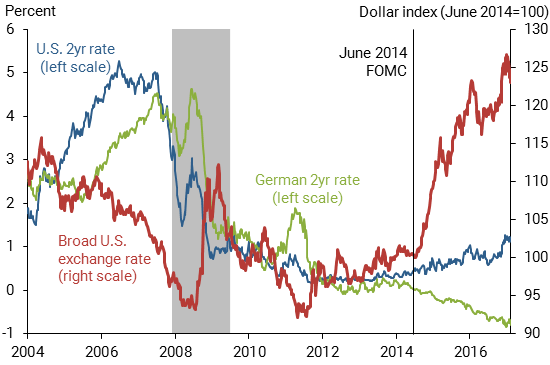 In this Economic Letter, we measure whether the U.S. dollar has become more sensitive to unanticipated changes in the course of monetary policy since 2014. Although the response has sometimes been larger than would have been predicted based on pre-2014 data, the evidence for an increase in sensitivity to interest rate surprises is limited. Moreover, the economic effects of a higher-than-anticipated appreciation are likely to be moderate.

Has the U.S. dollar increased in sensitivity to federal funds rate surprises?

Previous research has found that economic theory provides a poor guide for how much the dollar exchange rate will respond to changes in interest rates. Therefore, we examine the relationship empirically. In particular, we focus on monetary policy surprises because expected changes in interest rates should have little effect on exchange rates. For example, suppose that on a particular day, the Federal Open Market Committee (FOMC) is expected to change its federal funds rate target and, in fact, it does. If investors knew that the dollar would appreciate following that change, then they would buy dollars beforehand—bidding up its value. On the flip side, if they knew it would depreciate, they would sell dollars, pushing down its value. Exchange markets can only be in balance when the exchange rate does not respond to an anticipated change in interest rates.

To measure monetary policy surprises, we follow Gürkaynak, Sack, and Swanson (2005) by using changes in federal funds futures prices on Federal Open Market Committee (FOMC) announcement days. These futures prices embed expectations about future U.S. interest rates, which in turn influence exchange rates. To understand how this works, suppose that market expectations of future interest rates go up after an FOMC announcement. That surprise policy tightening is likely to lead to an unanticipated appreciation of the dollar, since dollar-denominated assets now offer higher yields than markets had previously expected. We focus only on FOMC announcement days because the announcement is likely to be the main driving factor of changes in interest rate expectations and the dollar on those days.

Figure 2 shows changes of the dollar relative to changes in what markets expect the federal funds rate will be two years in the future, as measured by the rate implied by federal funds futures contracts. The figure shows the relationship separately using data before and after June 2014. The horizontal axis shows the unanticipated change in that 24-month-ahead expected federal funds rate as measured on FOMC announcement days. The change is measured in basis points, or hundredths of a percentage point. The vertical axis shows the percent change of the value of the dollar on those days. 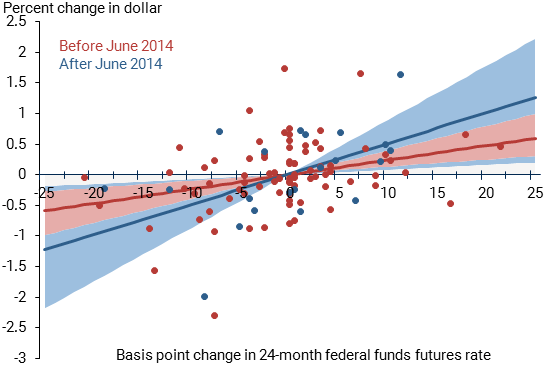 As shown by the slope of the red line, a 100 basis point surprise before June 2014 implied, on average, about a 2.5% appreciation of the dollar. The blue line shows that since June 2014 the response of the dollar to a 100 basis point increase has tended to be larger, approximately 5% on average. However, the dots corresponding to particular announcements are often very far from the fitted line, suggesting that the relationship is not particularly precise. Indeed, the shaded areas represent statistical 95% confidence intervals around our estimates. Their overlap demonstrates that the additional 2.5% appreciation is not statistically significant.

News about the short rate versus path of monetary policy

We perform the same estimation for futures prices for maturities shorter than 24 months (not shown). We find that the measured sensitivity of the U.S. dollar depends on the maturity of the fed funds future. While measures of dollar sensitivity at shorter horizons are very large in recent samples, the sensitivity for longer maturities is much more in line with traditional estimates.

We consider the longer horizon estimates, such as those in Figure 2, as more informative since changes at the short end can be misleading. Recently, markets have rarely been surprised about what the federal funds rate will be over the near future, so near-term surprises have been at most a few basis points and often zero. However, FOMC announcements have included news about the path of monetary policy, which is captured in longer-horizon futures. For example, if FOMC announcements lead markets to expect a faster pace of rate increases next year, then the longer-horizon futures would capture that but shorter-horizon futures prices might not.

In the data, the small movements in near-term federal funds futures happened to coincide with larger surprises about the future path of policy—say, two years out—which were responsible for the move in the dollar. Thus, measures based on very short-term fed funds futures would erroneously indicate heightened interest sensitivity of the dollar even if no change had taken place.

Our findings that measuring policy path surprises gives a more reliable picture of interest sensitivities is in line with previous work by Glick and Leduc (2015) as well as Swanson and Williams (2014) and Pyle and Williams (2016).

While we cannot rule out that the dollar has become more sensitive to policy surprises, the case for these changes is statistically insignificant and generally weak. It is important to note that this does not imply that the dollar will not appreciate if there are upward surprises in the path of the fed funds rate. Rather, it implies that the dollar is likely to appreciate at a rate in line with historical estimates of the sensitivity of the dollar to interest rates.

We might have expected a larger response in the recent period, since the interest rate sensitivity of the dollar also depends on reactions of foreign central banks to U.S. monetary policy changes. Ordinarily, interest rate policies are similar across advanced economies. Indeed, a surprise tightening by the Federal Reserve might lead markets to expect other central banks to tighten as well. That is, markets may expect the spread between U.S. and foreign rates to remain constant, which would not cause the dollar to appreciate through the mechanism described above. However, some foreign central banks currently appear constrained in their ability to cut interest rates as much as macroeconomic conditions demand. Hence, moves by the Federal Reserve might not be met by moves in foreign interest rates, leading to a divergence in the policy rates across countries. As a result, the dollar might appreciate more than in the past.

Figure 3 examines whether this is indeed the case. The figure shows rolling estimates of the sensitivity of foreign interest rates to surprises in U.S. interest rates, estimated on FOMC announcement days over a two-year window. As before, the measure of U.S. interest rate surprises is the daily change in the implied fed funds rate two years in the future. The dependent variable is the corresponding daily change in foreign one-month rates two years forward, either for a trade-weighted average for advanced foreign economies or for a particular region. Therefore, it shows a test of whether or not foreign central banks are in fact constrained in their ability to respond to changes in U.S. monetary policy. We measure foreign interest rates using the overnight index swap (OIS) two years ahead. 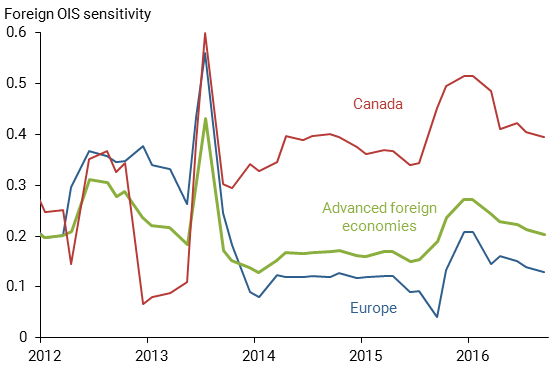 Based on the intuition provided earlier, we expect interest rate spreads to increase as central bank policy paths diverge. However, as shown in Figure 3, sensitivities of some advanced foreign economies have decreased, for example Europe, while others have increased, for example Canada. On average, we find that foreign rate sensitivities have been stable from 2011 to 2015. Hence, we reject the hypothesis that foreign central banks, on average, have faced constraints that limited their ability to respond to the Federal Reserve, and thus caused the dollar to appreciate.

Since we cannot rule out an increase in sensitivity of the dollar, we consider what the drag on the economy would be if the sensitivity had indeed increased substantially. Most likely, it would be a modest headwind for the U.S. economy over the next few years.

For example, as of mid-June, 2017, fed funds futures imply a funds rate of a little over 1½ percent in 24 months. Suppose markets quickly reassessed their view upward by 100 basis points. Figure 3 implies only about 80 basis points of that is likely to pass through to interest rate spreads, since foreign interest rates would be expected to rise about 20 basis points. If the extra sensitivity relative to pre-2014 values were 5 percentage points—twice as large as even the point estimate using post-2014 data—then the dollar would appreciate about 4% more than it otherwise would. The Federal Reserve’s widely used FRB/US model suggests that a 4% appreciation might, on its own, slow growth by a little under ¼ percentage point in each of the next two years, while lowering inflation by perhaps 5 to 10 basis points each year.

Our analysis suggests that this is a downside risk, rather than the expected outcome. One could create scenarios, such as turbulence in emerging market finances, where the effects would be even larger. However, if the exchange rate were to appreciate substantially more than expected in response to initial funds rate surprises, the path of monetary policy could adjust as warranted.

Even though there are concerns over how the exchange rate will respond to further monetary tightening, it is difficult to make a compelling case that the U.S. dollar has become more sensitive to news about short-term rates since 2014. Some evidence suggests that the dollar is more sensitive to unanticipated changes in near-term policy rates, but that evidence becomes much weaker when taking into account that news about near-term rates were released at the same time as news about the path of policy. Furthermore, we provide evidence that U.S. and advanced foreign economy interest rate spreads have been unaffected, on average, by central banks being constrained at the zero lower bound. Hence, we believe that the risk of the dollar appreciating more rapidly than expected is small, and the effects on economic activity of dollar movements during this tightening cycle should be in line with historical experience.

Swanson, Eric T., and John C. Williams. 2014. “Measuring the Effect of the Zero Lower Bound on Yields and Exchange Rates in the U.K. and Germany.” Journal of International Economics 92(S2-S21).