Interest rates have been trending down for more than two decades. One possible explanation is the dramatic worldwide demographic transition, with people living longer and population growth rates declining. This demographic transition in the United States—particularly the steady increase in life expectancy—put significant downward pressure on interest rates between 1990 and 2016. Because demographic movements tend to be long-lasting, their ongoing effects could keep interest rates near the lower bound longer. This has the potential to limit the scope for central banks to respond to future recessionary shocks.

Since the global financial crisis, short-term nominal interest rates in many developed economies have hovered around zero. Similarly, inflation rates have been quite low by historical standards, although they have remained positive and roughly stable on average in most countries. As a consequence, real interest rates—defined as nominal rates minus expected inflation—have also been very low, even falling negative for some countries.

This raises the question of whether accommodative monetary policies that were put in place as a response to the crisis are the reason behind the low real rates. If so, this phenomenon should be over as soon as central banks normalize their monetary policy practices.

Yet, a longer-term perspective reveals a different picture. Figure 1 reports median real interest rates across some developed economies and shows that, in fact, real interest rates have been trending down for more than two decades. This suggests that forces other than the recent accommodative monetary policies could be at play. 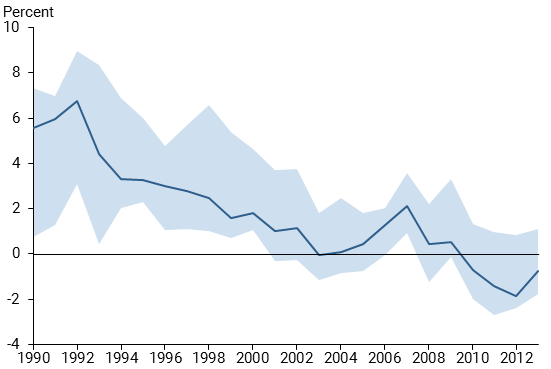 Population aging is a natural possible explanation for the declining trend in real interest rates because of its effects on household saving and consumption over peoples’ life cycles. In this Economic Letter we use the macroeconomic model of Carvalho, Ferrero, and Nechio (2016) to assess how this demographic transition—people living longer and population growth rates declining—has affected U.S. interest rates. We find the overall effect of population aging on U.S. interest rates has been negative and quantitatively relevant and is projected to be long-lasting.

The world is undergoing a dramatic demographic transition. In most advanced economies, actual and expected longevity have increased steadily, while the median retirement age has changed little, leading to longer retirement periods. Meanwhile, population growth rates are declining and, in some cases, even becoming negative. Panels A and B of Figure 2 report the actual and United Nations World Population Prospects projections for life expectancy and population growth for a set of developed economies. The panels show a remarkable population aging over the past few decades. The projections indicate that these changes will persist and deepen for some time in the future.

But how could these trends in demographics affect interest rates?

Changing demographics can affect the “natural” rate of interest. This rate, also known as r* (r-star), is the inflation-adjusted interest rate that is consistent with the full use of economic resources and steady inflation near the Fed’s target level. Thus, the natural rate of interest is the real federal funds rate consistent with stable inflation absent transitory business cycle shocks to the economy.

Unfortunately, r-star is not directly observable, so it must be inferred using data on economic variables that can be observed, such as nominal interest rates, inflation, and real GDP growth. The most recent estimates suggest a significant decline in r-star in the United States and worldwide (Christensen and Rudebusch 2017, Holston, Laubach, and Williams 2016). This finding raises the question of what is behind this decline.

Some economic models relate the natural rate of interest to households’ degree of patience, which influences their choice of saving versus current consumption, and to the expected growth rate of potential GDP, which influences the rate of return from savings (see, among others, Carvalho, Ferrero, and Nechio 2016). Therefore, in these models, demographic trends as depicted in Figure 2 could result in changes to the demand and supply of savings worldwide and lead to changes in r-star.

Intuitively, demographic changes affect r-star through the two main channels shown in Figure 2. For a given retirement age, an increase in life expectancy would lengthen individuals’ retirement period, generating additional incentives to save rather than spend throughout the life cycle. This effect could be even stronger if agents believe that public pension systems will not be able to bear the additional burden generated by an aging population. Therefore, the overall boost to savings at the expense of current consumption caused by an increase in life expectancy puts downward pressure on r-star. 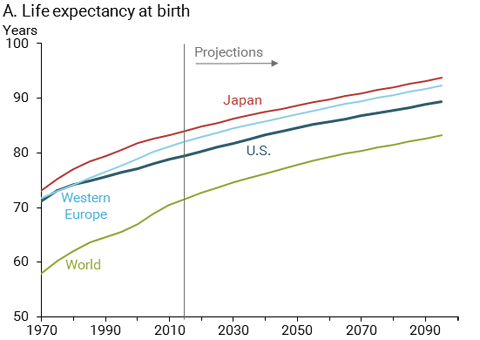 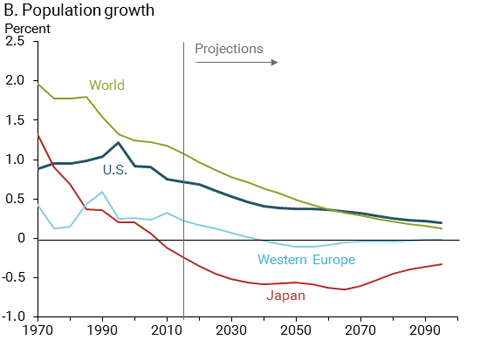 Source: United Nations World Population Prospects. Projections are as of 2015.

Changing demographics and r-star in the United States

This discussion suggests that the effects from the changes to life expectancy and population growth on the natural rate of interest could potentially offset each other.

To quantify the overall effect of population aging in the United States on r-star, we rely on the model developed by Carvalho, Ferrero, and Nechio (2016), which allows for changes in longevity and population growth to affect household lifetime decisions about consumption and savings. This in turn affects the supply and demand for savings in the model and, hence, the implied r-star.

We specify our model to replicate the actual and projected paths for life expectancy and population growth as shown in Figure 2, beginning in 1990 and projected up to 2100. Of course, projections so far into the future create ample opportunity for error. To partially address this concern, we incorporate the expected demographic changes over the entire period but focus our analysis on the nearer-term effects on r-star from 1990 to 2016.

More specifically, we set the model parameters so that population growth declines from 1% as of 1990 to 0.3% as of 2100, as projected by the United Nations. Life expectancy increases from 75 to 91 years over that period. We also assume an average retirement age of 65, which implies that the typical length of retirement rises from 10 to 26 years. We then assess the model-implied effects of this demographic transition on r-star between 1990 and 2016, shown in Figure 3. Additional details on the model and assumptions are available in Carvalho, Ferrero, and Nechio (2016).

Figure 3
Changing demographics and r-star in the United States 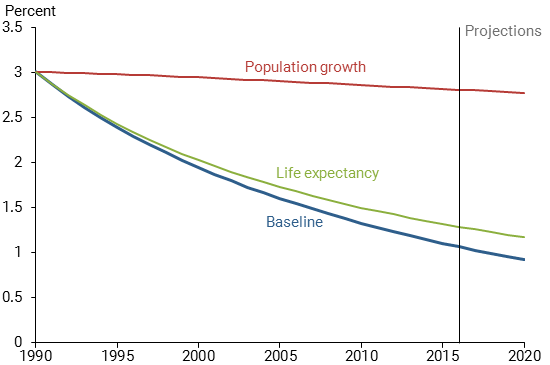 Source: Authors’ calculations based on Carvalho, Ferrero, and Nechio (2016) model, calibrated for the United States.

Intuitively, if people expect to live longer they will tend to save more money so they can more easily finance a lengthier retirement. In the model, this effect appears to dominate the smaller but also negative effect of declining population growth.

Of course, the results of this exercise depend on the model and the parameters we use. However, our main finding that demographic changes induce a quantitatively negative effect on r-star has been corroborated by other studies (see Gagnon, Johannsen, and Lopez-Salido 2016 and Eggertsson, Mehrotra, and Robbins 2017).

Factors other than country-specific demographic changes could also help explain the decline in interest rates. In a world in which capital can easily flow from one country to another, the global supply and demand for funds may play a role. This will depend not only on shifting demographics worldwide but also on trend productivity, economic growth, the demand for safe assets, and other factors (Caballero, Farhi, and Gourinchas 2016, Williams 2016, Lansing 2017, and Fisher 2017).

In this Letter, we use the life-cycle model in Carvalho, Ferrero, and Nechio (2016) to quantify the impact of changes in U.S. demographics on the real natural rate of interest, or r-star. The model allows changes in life expectancy and population growth to affect household decisions on consumption and savings. Our results suggest that changing demographics related to population aging will have a negative, quantitatively relevant, and long-lasting effect on the natural rate of interest.

Our model projections regarding the substantial effects of population aging suggest that future economic policy will have to adjust to operating in a low r-star world. In such an economic environment, interest rates would hover not too far above their lower bound. This implies that central banks could be more limited in their ability to further lower the policy rate to respond to recessionary shocks and stimulate the economy.

Carlos Viana de Carvalho is a deputy governor at the Central Bank of Brazil and an associate professor of economics at Pontifical Catholic University of Rio de Janeiro.

Andrea Ferrero is an associate professor of economics at the University of Oxford.