More than half a century since the Civil Rights Act became law, U.S. workers continue to experience different levels of success depending on their race. Analysis using microdata on earnings shows that black men and women earn persistently lower wages compared with their white counterparts and that these gaps cannot be fully explained by differences in age, education, job type, or location. Especially troubling is the growing unexplained portion of the divergence in earnings for blacks relative to whites.

In 1964 President Lyndon B. Johnson signed the Civil Rights Act, prohibiting discrimination based on race, color, religion, sex, or national origin. The signing marked a shift in American law that proponents hoped would produce greater equality across all dimensions of society, including the labor market.

While many things have changed since that historic moment, the gaps in labor market outcomes between black and white Americans remain large and in some cases are increasing. In this Economic Letter we document these gaps and examine their key determinants. The findings point to persistent shortfalls in labor market outcomes for black men and women compared with their white counterparts that cannot be fully explained by differences in age, education, job type, or location. Especially troubling is the growing unexplained portion of the divergence in earnings for blacks relative to whites.

A direct way to compare the labor market outcomes of blacks and whites is to look at unemployment rates and average hourly earnings for black and white men and women, as shown in Figure 1. The data come from the Current Population Survey (CPS) from 1979 to 2016; unemployment rates are published Bureau of Labor Statistics data, while average hourly earnings are based on our own calculations using earnings records from the CPS. 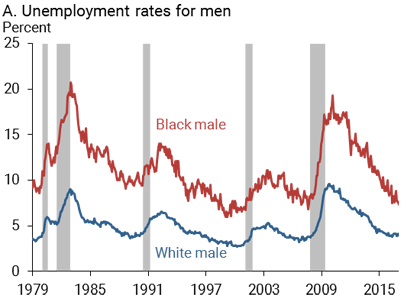 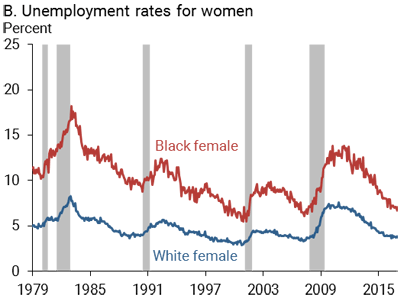 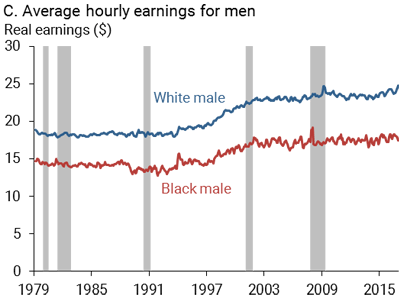 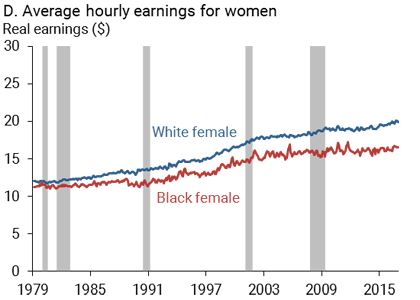 Conditional on being in the labor force, the average African American worker, male or female, is more likely to be unemployed (panels A and B) than their white counterparts. Indeed, unemployment rates for black workers are 6.4 percentage points higher on average during expansions than those for white workers over our sample. These gaps widen to 6.9 percentage points on average in recessions as the incidence of unemployment and the duration of job searches increase more for African Americans than for whites. Recent research by Cajner et al. (2017) finds that these outcomes are not the result of differences in education, age, or experience, but rather reflect other unmeasured factors. Whatever the cause, the persistent differential in the unemployment rates of black and white workers indicates that black job seekers face different job opportunities than their white counterparts.

Looking behind the earnings gap

To understand what drives the black-white earnings gap, it’s important to consider the factors that influence wages. Economic theory tells us that workers’ earnings should largely be a reflection of their productivity; this component can be measured indirectly using data on characteristics such as age, education, and industry/occupation. Other measurable factors that have been found to be important include where people live and their part-time status. Finally, factors such as institutions, historical pay norms, discrimination, and the effects of public policies like the minimum wage (Fortin and Lemieux 1997) can also affect pay, although they are far more difficult to measure.

Economists generally use a statistical method known as regression analysis to separate differences in pay related to observable factors from those related to other harder-to-measure factors. Figure 2 shows the results of such decompositions annually from 1979 through 2016. The black line plots the average percent earnings gap in each year, and the bars show the contribution to the gap from each factor; we include observable measures of differences in age, education, industry and occupation, state of residence, and part-time job status. The red portions of the bars show the part of the gaps unexplained by these factors. 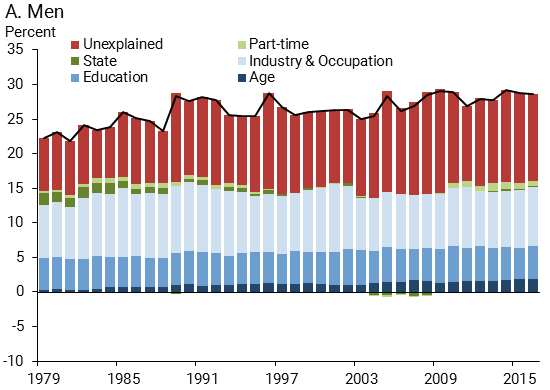 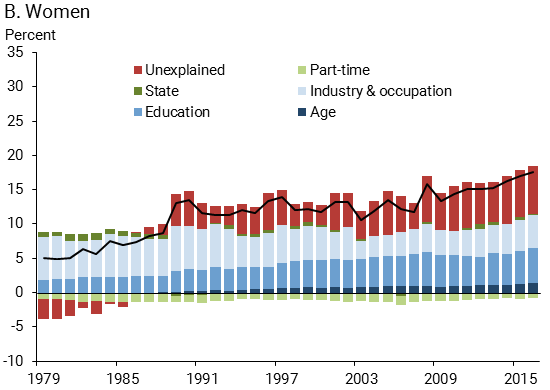 The results highlight a number of crucial points about the earnings gap between black and white workers. First, a sizable portion of the black-white wage gap comes from the fact that blacks and whites work in different industries and occupations (light blue bars). This sorting matters because different jobs have different levels of labor productivity, primarily related to the amount of capital that workers use in production. For example, drilling and mining, which use a lot of machines and equipment, are industries with high productivity occupations, whereas retail and other services, which rely relatively more on people than machines, have lower productivity. Controlling for differences in the types of jobs in which blacks and whites work explains about 9 percentage points of the annual gap for men and about 5 percentage points of the annual gap for women. The importance of these differences in industry and occupation composition has declined over time, especially for women, as the distributions of black and white workers in different types of jobs have grown more equal. That said, these differences continue to be a notable factor in the wage gap between blacks and whites.

The remaining measurable variables that capture differences in age, part-time status, and state of residence have only a modest impact on the wage gaps of black men and women.

The most important fact highlighted by our decomposition is that a significant portion of the wage gap between blacks and whites is not traceable to differences in easily measured characteristics, but rather is unexplained within our model (red bars). Perhaps more troubling is the fact that the growth in this unexplained portion accounts for almost all of the growth in the gaps over time. For example, in 1979 about 8 percentage points of the earnings gap for men was unexplained by readily measurable factors, accounting for over a third of the gap. By 2016, this portion had risen to almost 13 percentage points, just under half of the total earnings gap. A similar pattern holds for black women, who saw the gaps between their wages and those of their white counterparts more than triple over this time to 18 percentage points in 2016, largely due to factors outside of our model. This implies that factors that are harder to measure—such as discrimination, differences in school quality, or differences in career opportunities—are likely to be playing a role in the persistence and widening of these gaps over time. Notably, our results are similar to those of Cajner et al. (2017), who use a similar approach to break down the components of unemployment rate gaps and also find a large unexplained portion.

Will time solve the problem?

A common criticism of studies that compare average workers from different groups is that the average does not capture the diverse experiences of individuals within the group, and thus such generalizations aren’t useful when considering policy remedies. For example, one might worry that comparing the average black worker to the average white worker hides important gains made in the wage gaps for more highly educated black workers, which could imply in turn that policies should focus on expanding educational attainment. To investigate this possibility, Figure 3 shows the percent shortfall in earnings for black men and women relative to white men and women by educational attainment. The bars reflect wage gaps averaged over three 12- to 13-year periods. 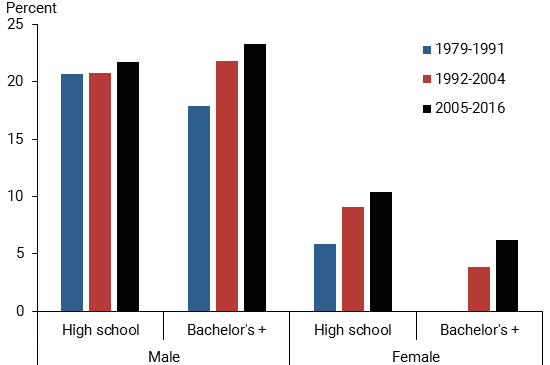 These results imply that the average experience of black workers, shown in Figures 1 and 2, is widespread and reflects the outcomes for black workers across the education distribution. Though not shown here, the consistency of the black-white wage gap across the full spectrum of subgroups in our data indicates that the forces contributing to the wage gap apply to the entire population of black workers. These results imply that time alone is unlikely to remedy the large gaps in earnings between black and white workers.

The opportunity to succeed is at the foundation of our dynamic economy. In this context, large and persistent shortfalls for African Americans, or any other group, are troubling. Individuals invest in themselves based on the payoff they expect in the labor market. Lower payoffs can result in lower investment, limiting personal and generational mobility. Moreover, disparities in labor income pass through to lower consumption, savings, and wealth, which ultimately makes individuals and families more vulnerable to economic shocks. But perhaps most crucially, there are considerable pressures weighing on U.S. economic growth in coming decades, and it is important for all groups to fully engage in the economy to achieve a shared national prosperity.

Mary C. Daly is executive vice president and director of the Economic Research Department of the Federal Reserve Bank of San Francisco.

Bart Hobijn is a professor at Arizona State University and a visiting scholar in the Economic Research Department of the Federal Reserve Bank of San Francisco.

Joseph H. Pedtke is a research associate in the Economic Research Department of the Federal Reserve Bank of San Francisco.

Cajner, Tomaz, Tyler Radler, David Ratner, and Ivan Vidangos. 2017. “Racial Gaps in Labor Market Outcomes in the Last Four Decades and over the Business Cycle.” Finance and Economics Discussion Series 2017-071. Washington: Board of Governors of the Federal Reserve System.