The Financial Crisis at 10: Will We Ever Recover?

A decade after the last financial crisis and recession, the U.S. economy remains significantly smaller than it should be based on its pre-crisis growth trend. One possible reason lies in the large losses in the economy’s productive capacity following the financial crisis. The size of those losses suggests that the level of output is unlikely to revert to its pre-crisis trend level. This represents a lifetime present-value income loss of about $70,000 for every American.

The size of the U.S. economy, as measured by GDP adjusted for inflation, is well below the level implied by the growth rates that prevailed before the financial crisis and Great Recession a decade ago. The United States is not alone; the United Kingdom and European economies also remain far below the levels implied by their pre-crisis trends (Barnichon, Matthes, and Ziegenbein 2018). Studies of previous episodes of financial stress around the globe point to similarly large and persistent output losses. For instance, Romer and Romer (2017) study a panel of countries in the Organisation for Economic Co-operation and Development and find that gross domestic product is typically about 9 percentage points lower five years after an extreme financial crisis.

If history is a reliable guide, academics and policymakers are rightfully worried that output might not revert to the level implied by its pre-crisis trend (black dashed line in Figure 1). The magnitude of the shortfall is evident in the figure. It displays the series of downward revisions that the Congressional Budget Office (CBO) made to its estimate of potential output—the long-run level of output that is expected to prevail once the transitory effects of cyclical factors have dissipated. The revisions over the past 10 years imply that actual U.S. GDP (solid blue line) in 2017 converged on a new potential level (dashed green line) that was about 12 percentage points below the level implied by its pre-crisis trend (based on GDP data released prior to the Bureau of Economic Analysis’ comprehensive update in July 2018). Revisions to potential GDP by other forecasters, including the San Francisco Fed, yield similar shortfalls in potential output. 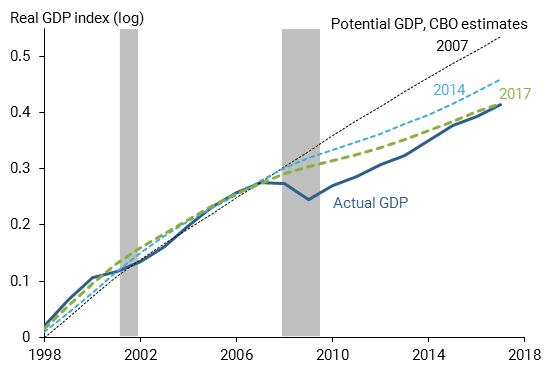 Note: Dashed lines show potential GDP estimated by the CBO in different years, measured in natural log terms, with the 2007 estimate of potential normalized to zero in 1998, such that subsequent changes are measured in fractional terms. Gray bars reflect NBER recession dates.

The CBO attributes a large fraction of the shortfall to its reassessment of trends that were under way before the recession (CBO 2014). By contrast, this Letter describes our findings in a recent paper (Barnichon, Matthes, and Ziegenbein 2018) that explores to what extent the financial crisis caused some of the shortfall in potential output. We find that a large fraction of the gap between current GDP and its pre-crisis trend level is associated with the 2007–08 financial crisis, and conclude that GDP is unlikely to revert to the level implied by its trend before the crisis.

Financial conditions and the economy: Pain but no gain?

Many studies have investigated the impact of financial market disruptions on economic activity, but the evidence is mixed. On the one hand, studies of earlier financial crises find that financial market disruptions are generally followed by a large and persistent decline in output (for example, Romer and Romer 2017). On the other hand, studies that use surprise movements in financial conditions to explore whether the cause can be traced back to financial disruptions report mild and transitory effects on economic activity (for example, Gilchrist and Zakrajsek 2012).

One way to reconcile these conflicting views of the effects of financial markets on the economy is to acknowledge the possibility that the relationship is asymmetric. When the economy is doing well, an adverse financial shock—a disturbance that limits the ability of the financial sector to handle risk—is likely to restrain economic activity by preventing some firms from financing profitable investment opportunities. But the converse is not necessarily true: When the economy is doing poorly or in a recession, favorable financial conditions may not necessarily stimulate economic activity if there are no investment opportunities. As such, financial conditions may cool a hot economy but might not heat up a cool one.

To accommodate both views of the link between financial markets and the economy, we construct a statistical model that is flexible enough to capture these asymmetries. Although such asymmetries are often discussed in theoretical work (for example, Brunnermeier and Sannikov 2014), previous empirical studies have not explicitly accounted for them. By contrast, our empirical model allows for the possibility that financial market shocks have asymmetric effects. Consistent with theory, we find that an easing of financial conditions has little effect on economic activity. However, an adverse financial shock has large effects on economic activity. Because such losses are very persistent, they can have dramatic effects on societal welfare and important implications for policy.

U.S. GDP since the financial crisis

Our model combines information on economic conditions, notably GDP, with information on financial market conditions. This is measured with the excess bond premium (EBP), which Gilchrist and Zakrajsek (2012) proposed as a quantitative measure of the risk-bearing capacity of the financial sector. The EBP measures how much more corporations have to pay to borrow in the bond market relative to the government, net of compensation for the risk that the corporation will default on its obligations. This variable is therefore a good measure of private credit availability.

Using history as a guide, our model captures how financial conditions and GDP typically interact over the business cycle (see Barnichon et al. 2018 for complete details). Since the U.S. economy has experienced many episodes of mild financial market disruptions, the model can use these episodes to calculate how future changes in financing conditions are likely to affect the economy. Based on this idea, we then use our model to assess how much of the gap between current GDP and its pre-crisis trend level is explained by the financial crisis. To do this, we develop a scenario to calculate how GDP would have fared without the large financial market disruptions of 2007–08. Figure 2 presents our results.

Figure 2
The effects of the 2007–08 financial crisis: Actual vs. scenario estimates without crisis 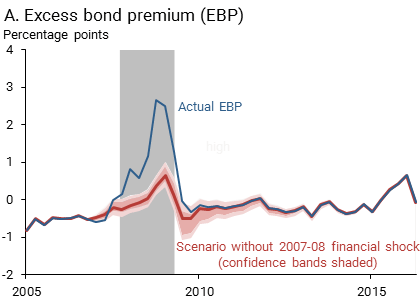 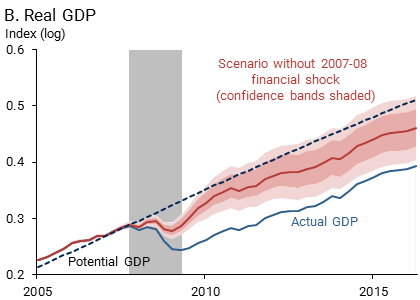 Note: Potential GDP in panel B represents 2007 estimate from Congressional Budget Office. GDP is measured on a log scale so that changes in GDP can be read as percent changes in GDP. EBP estimate is from Gilchrist and Zakrajsek (2012).

Panel A of Figure 2 shows the actual path (blue line) and the path from our scenario (red line) for the EBP, our measure of credit conditions. In our scenario without major financial stresses in 2007–08, the EBP increases only mildly, driven by its normal response to a deterioration in economic conditions. Indeed, during recessions, the overall appetite for risk normally decreases as the financial sector becomes more risk-averse or simply has fewer funds available to lend.

Panel B of Figure 2 shows how U.S. real GDP behaves in the actual data (blue line) and in our scenario with no financial disruptions in 2007–08 (red line). The dark red and light red bands around the red line correspond to the 68% and 90% confidence intervals around our estimates, that is, two different ranges of their statistical reliability. Importantly, for this exercise we estimate our statistical model using data from 1973 up to 2006 only, thereby excluding any information from the most recent financial crisis that could contaminate our estimates. As a result, the predicted path of GDP is explained only by the typical path of output following financial market disruptions in the pre-crisis 1973–2006 period.

Without the large adverse financial shocks experienced in 2007 and 2008, the behavior of GDP would have been very different. It would most likely resemble the less severe 1991 recession, with GDP declining by only 1.5% and reverting to close to its pre-crisis trend level in a few years. This behavior is in stark contrast to actual GDP, which has not reverted to its pre-crisis trend level.

In our statistical experiment, the mild recession would imply that, by the end of 2017, the gap between output and potential output from the 2007 CBO estimate (dashed black line) would only be about 5 percentage points instead of the 12 percentage points observed today. This means that, according to our estimates, the 2007–08 financial crisis persistently lowered output by roughly 7 percentage points. This is a large number: In dollar terms, it represents a lifetime income loss in present-discounted value terms of about $70,000 for every American. This simple calculation takes the reading of GDP per person in 2007 (approximately $50,000) and assumes an annual discount rate of 5%.

We do not yet have a good grasp on the mechanisms through which financial market disruptions can have such persistent effects on output. One possibility is simply the highly peculiar behavior of economies with financial frictions. As shown by Brunnermeier and Sannikov (2014), with financial frictions, a large adverse shock can take the economy away from its normal growth path for a very long but finite time. Another possibility is that episodes of financial distress could force businesses to cut research expenditures or could prevent high-growth potential start-ups from emerging (see, for example, Sedlacek and Sterk 2017), which could permanently affect the economy’s future productive capacity.

In this Letter, we evaluate the effect of the 2007–08 financial crisis on U.S. output 10 years later. We find that a large fraction of the gap between current output and its pre-crisis trend is associated with the large 2007–08 financial shocks. Our estimates suggest that the economy is unlikely to regain this large output loss and GDP is unlikely to revert to its previous trend level. Financial market disruptions can have large costs in terms of societal welfare by causing persistent losses in the level of GDP. This suggests that finding ways to prevent or contain future financial crises is an important research and policy priority.

Christian Matthes is a senior economist in the Research Department of the Federal Reserve Bank of Richmond.

Alexander Ziegenbein is an assistant professor of economics at the University of Vienna.