During and immediately after the Great Recession, the U.S. labor market experienced massive job losses not seen in at least three decades. Because involuntary job displacement has long-term negative consequences for employment and earnings, it is important to understand what helps displaced workers find new jobs.

Research emphasizes how the lack of full information hinders both workers searching for new jobs and employers searching for workers. In labor market network models, information about either job openings or candidates flows through informal contacts that people have with one another. Network models hence predict that, if unemployed workers have strong network connections to the labor market, they will find new jobs—and better ones—more quickly. In this Letter, we present evidence supporting this prediction, focusing on workers who experienced mass layoffs around the time of the Great Recession.

One example of how heavily people rely on friends and other contacts to find jobs comes from Bewley (1999), who estimated that 30-60% of jobs were found through relatives and friends. In one model of networks, unemployed workers do not have full information about job vacancies in the labor market. Beyond the usual ways job searchers learn about openings, such as from advertisements, they may also hear about jobs from their network contacts, particularly people employed at companies with vacancies (Calvó-Armengol and Jackson 2007). Thus, the probability that an unemployed worker learns of a job vacancy—and hence finds a job—will be higher the more contacts there are in the network and the higher the employment rate among those contacts. Moreover, because networks provide information about more vacancies, that worker is more likely to find a better job.

A second model emphasizes the role networks play in providing information to employers. In this model, employers have incomplete information about the quality of job applicants. Businesses rely on information about applicants from their current employees—or referrals (Montgomery 1991). The implication is similar: An unemployed worker searching for a job is more likely to find a job—and a better job—if that worker has many network contacts who can provide referrals to their employers. Because the models have similar implications, our evidence does not speak to the validity of one model over the other but rather to the importance of such networks in helping workers recover from mass layoffs.

We study potential network connections among workers who live in the same neighborhood—in particular, census tracts, which are small neighborhoods of around 4,000 residents who tend to share socioeconomic characteristics. We do not directly observe network connections among neighbors, but there is indirect evidence that neighbors share information about jobs. Bayer, Ross, and Topa (2008) show that two individuals who live on the same block are much more likely to work on the same block (not the one they live on), even accounting for other similarities among neighbors. Hellerstein, McInerney, and Neumark (2011) find that people who work at the same employer are likely to live in the same census tract, even accounting for the fact that neighbors often work for common sets of employers that are clustered together geographically because of factors like highways or mass transit stops. This evidence is stronger for lower-skilled workers for whom job markets and hence networks are more local.

Consistent with these two models of labor market networks, our network measure multiplies the employment rate among working-age residents in a person’s census tract by the average gross hiring rate of all the employers at which a person’s neighbors work. This network measure is higher when two conditions hold: First, if a larger share of a person’s neighbors is employed—so more of them are potential job contacts; and second, if the employers of those neighbors are doing more hiring—so that the job contacts are at employers with more vacancies. We call this the “active employer network” measure to emphasize the dual influences it reflects. We measure this in the quarter of the year after the person experiences a mass layoff, when they are searching for a new job.

To capture both where people live and where they and their neighbors work, we turn to data from the U.S. Census Bureau’s Longitudinal Employer-Household Dynamics infrastructure files. Our analysis is based on data for over 9 million workers who experienced a mass layoff between 2005 and 2012; we focus on results for the approximately 7 million workers who earned less than $50,000 before the layoff because somewhat lower-skilled workers are more likely to rely on local labor market networks to find jobs.

Finally, we test whether reemployment occurred specifically at the employer of a neighbor, as network models would predict, and estimate the effects of becoming employed through a network connection.

The first bar in Figure 1 shows the positive impact that our active employer network measure has on the probability that workers will be reemployed in the first quarter after the mass layoff. We measure this as the effect of a change in network influence from the 25th percentile of its distribution to the 75th percentile—that is, the difference between a neighborhood with relatively fewer prospects for network hiring, and a neighborhood with relatively more prospects for such hiring. The estimated impact is a 1.4 percentage points higher probability of reemployment in the quarter of the mass layoff, relative to a base reemployment rate for all workers in the sample of 56.7%. 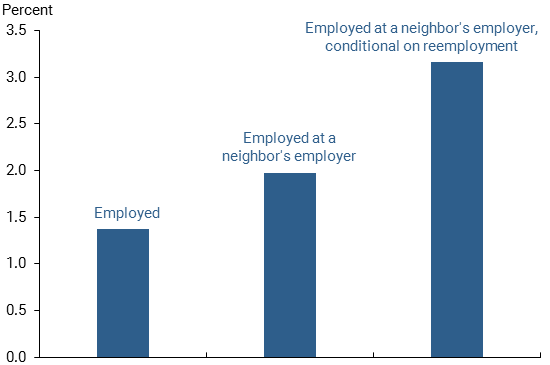 Note: All estimates are statistically significant at the 1% level. Effects shown are for the difference between the value of the active employer network measure at the 25th percentile and the 75th percentile of the distribution. Source: Hellerstein et al. (2015), Table 5.

Finally, the third bar reports this effect conditional on reemployment. Evidence indicates that workers who experienced a mass layoff and found a new job in the next quarter are more likely to have found a job at a neighbor’s employer. This effect is larger; the probability is 3.2 percentage points higher, which is about a 14% increase relative to the overall likelihood of finding reemployment at a neighbor’s employer of 22.1%, conditional on reemployment. This latter estimate provides the most direct evidence that, for workers who experience mass layoffs, employed members of neighborhood networks serve directly as conduits for information about vacancies or job applicants.

Additional evidence indicates that the local networks we study also lead to workers finding better jobs that last longer and pay more. We estimate the relationship between finding work at a neighbor’s employer in the quarter after the layoff and both how long the job lasts and how much it pays in comparison to other workers who also found jobs in the first quarter after the layoff but not at a neighbor’s employer.

Figure 2 shows that reemployed workers who found jobs at a neighbor’s employer are 4.6 percentage points or about 15% more likely to be working at that job two years after the mass layoff. Also indicative of network connections leading to better job matches, these workers earn about 4.5% more in those two years. 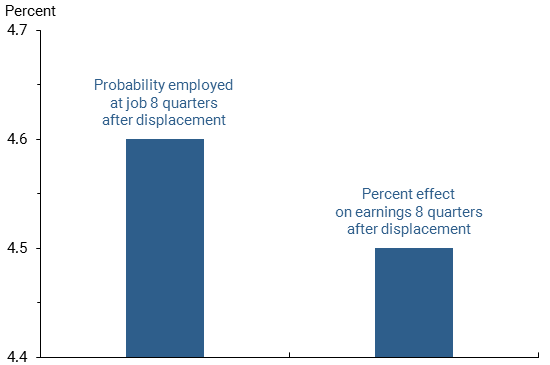 Note: All estimates are statistically significant at the 1% level. Effects shown are for the difference between the value of the active employer network measure at the 25th percentile and 75th percentile of the distribution. These estimates are for the subsample of workers laid off in 2005. Source: Hellerstein et al. (2015), Table 10.

In this Letter, we discuss evidence indicating that stronger labor market network connections between neighbors increase the probability of rapid reemployment for workers who experience mass layoffs. Moreover, these laid-off workers are more likely to find jobs at employers of their neighbors, and the jobs they find through this channel pay more and last longer, indicating better job matches.

Mass layoffs were particularly pronounced during the Great Recession. Our evidence implies that part of the challenge in recovering from high levels of unemployment is that the other workers in the networks on which workers rely to find jobs are more likely to be unemployed. This makes it less likely that others in the network will be aware of job vacancies; and if they are, they are more likely to try to get the job themselves, rather than pass along information about the vacancy to others in their network. One implication of this evidence is that, in the aftermath of business cycle downturns, unemployed workers may face increased difficulties in finding information about job vacancies that can help them return to work.

David Neumark is Chancellor’s Professor of Economics and Director of the Economic Self-Sufficiency Policy Research Institute at the University of California, Irvine, and a Visiting Scholar at the Federal Reserve Bank of San Francisco.

Judith K. Hellerstein is Professor of Economics at the University of Maryland.

All results have been reviewed to ensure that no confidential information is disclosed. This research was supported by a grant from the Russell Sage Foundation. Any analysis, opinions, and conclusions expressed herein are those of the authors and do not necessarily represent the views of the U.S. Census Bureau, the Federal Deposit Insurance Corporation, or the Russell Sage Foundation.