Economic Forecasts with the Yield Curve

The term spread—the difference between long-term and short-term interest rates—is a strikingly accurate predictor of future economic activity. Every U.S. recession in the past 60 years was preceded by a negative term spread, that is, an inverted yield curve. Furthermore, a negative term spread was always followed by an economic slowdown and, except for one time, by a recession. While the current environment is somewhat special—with low interest rates and risk premiums—the power of the term spread to predict economic slowdowns appears intact.

One of the most pervasive relationships in macroeconomics is that between the term spread—the difference between long-term and short-term interest rates—and future economic activity. A negative term spread, that is, an inverted yield curve, reliably predicts low future output growth and indicates a high probability of recession (Rudebusch and Williams 2009). This relationship holds not only in the United States but also for a number of other advanced economies (Estrella and Mishkin 1997). The term spread is one of the most reliable predictors of future economic activity among a wide range of economic and financial indicators and, as such, is closely watched by professional forecasters and policymakers alike.

Over most of the current recovery, particularly in 2017, the yield curve has flattened. As of the end of February, the difference between the ten-year and one-year Treasury yields stands at only 0.8%. The Federal Reserve, which affects short-term interest rates, is continuing its path of monetary policy normalization. In its Summary of Economic Projections from December 2017, the median projection of the federal funds rate rises from its current 1.4% to 3.1% in 2020, even slightly overshooting its long-run projected value of 2.8%. Many observers and forecasters therefore expect the term spread to shrink even further, including the possibility that it could turn negative.

The question then naturally arises whether this development may signal a rising probability that a recession could begin. Some commentators have argued that the relationship between the slope of the yield curve and the business cycle may have changed due to the unique current circumstances, including the unusually low risk premiums holding down interest rates. This Economic Letter revisits and updates some of the empirical evidence for the predictive power of the term spread and addresses the question of whether this time may indeed be different.

The yield curve and the business cycle

The predictive power of the term spread is immediately evident from Figure 1, which shows the term spread calculated as the difference between ten-year and one-year Treasury yields from January 1955 to February 2018, together with shaded areas for officially designated recessions. Every recession over this period was preceded by an inversion of the yield curve, that is, an episode with a negative term spread. A simple rule of thumb that predicts a recession within two years when the term spread is negative has correctly signaled all nine recessions since 1955 and had only one false positive, in the mid-1960s, when an inversion was followed by an economic slowdown but not an official recession. The delay between the term spread turning negative and the beginning of a recession has ranged between 6 and 24 months.

Figure 1
The term spread and recessions 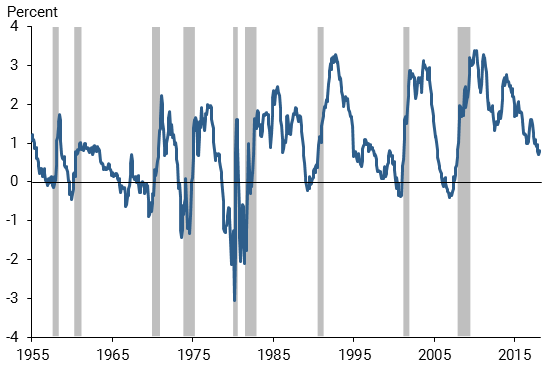 While historical circumstances differed for these episodes, the patterns of past yield-curve inversions were remarkably similar: The decline in the term spread was generally driven by a pronounced increase in short-term interest rates. Long-term rates, on the other hand, typically moved much more gradually and either increased slightly over those periods or even declined.

This pattern suggests some possible explanations why inversions are typically followed by a recession. During an economic expansion, the Fed normally tightens its monetary policy stance by gradually raising short-term interest rates. The central feature of the business cycle is that expansions are at some point followed by recessions. Long-term rates reflect expectations of future economic conditions and, while they move up with short-term rates during the early part of an expansion, they tend to stop doing so once investors’ economic outlook becomes increasingly pessimistic. A flatter yield curve also makes it less profitable for banks to borrow short term and lend long term, which may dampen loan supply and tighten credit conditions. Despite these plausible explanations, the complex relationship between interest rates and the macroeconomy makes it difficult to pinpoint the exact mechanism underlying the link between yield-curve inversions and economic slowdowns. Instead of attempting theoretical explanations, we focus on the predictive relationships in the data.

A statistical analysis can provide further insights about the forecasting power of the term spread for future recessions. For this analysis, we investigate predictions of recessions 12 months in the future, which is the horizon with the highest forecast accuracy (Berge and Jorda 2011). A simple, model-free forecasting rule predicts a future recession depending on whether the term spread is above or below a certain threshold. The key question is which threshold to choose; in other words, how far does the term spread need to decline so that a forecaster should predict a future recession? Analyzing the number of false positives and false negatives for each possible threshold suggests that the best trade-off is accomplished for a threshold very close to zero. There appears to be something special about a negative term spread and yield curve inversions, both for predicting recessions and, according to additional analysis, for predicting output growth. The implication is that a negative term spread is much more worrisome for the economic outlook than a low but positive term spread.

Figure 2
Estimated probabilities of recession based on term spread 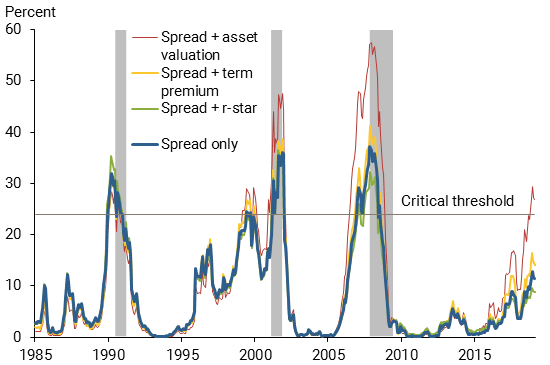 Is this time different?

The economy has been in an expansion for an extended time, monetary policy is on a normalization course, and further increases in short-term rates are widely anticipated. Professional forecasters generally expect a narrowing of the term spread, and some see a significant risk of a yield curve inversion. The reliable empirical pattern documented above suggests that this would imply a high probability of a recession soon to follow.

But a number of observers have suggested that a low or even negative term spread may be less of a reason to worry than usual, arguing that historical experiences do not necessarily apply to the current situation. One factor that is different from before is that, despite some recent increases, the level of interest rates is low by historical comparison (Bauer and Rudebusch 2016). The argument goes that increases in the short-term policy rate may slow down the economy less than usual in such an environment. Similarly, given the currently low level of the natural policy rate (Williams 2017), a closely related argument suggests that low long-term rates do not necessarily reflect a pessimistic economic outlook but rather a new normal for interest rates.

While these hypotheses have some intuitive appeal, our analysis shows that they are not substantiated by a statistical analysis that incorporates the suggested factors into the type of predictive models we use. For example, including both a short-term and long-term interest rate in such models—and thereby allowing the level of interest rates to have a separate effect from that of the term spread—shows that only the difference between these interest rates, the term spread, matters for recession predictions. Similarly, various models that include estimates of the natural level of interest rates do not improve upon the predictive accuracy of the simple model with only the term spread.

In addition to the baseline estimates discussed above, Figure 2 includes estimated recession probabilities from three other models that incorporate either the term premium, the natural level of real interest rates called r-star, or a measure of asset market valuations, specifically the ratio of household net worth to income (Mertens, Shultz, and Tubbs 2018). None of these models predicts substantially lower probabilities of recessions in the current environment, while the model including the net worth-to-income ratio predicts a somewhat larger probability due to current high valuations. Any differences in estimated probabilities should be taken with a grain of salt, however, since including these predictors adds further statistical uncertainty to the models. An extensive analysis of various models leads us to conclude that the term spread is by far the most reliable predictor of recessions, and its predictive power is largely unaffected by including additional variables.

Forecasting future economic developments is a tricky business, but the term spread has a strikingly accurate record for forecasting recessions. Periods with an inverted yield curve are reliably followed by economic slowdowns and almost always by a recession. While the current environment appears unique compared with recent economic history, statistical evidence suggests that the signal in the term spread is not diminished. These findings indicate concerns about the scenario of an inverting yield curve. Any forecasts that include such a scenario as the most likely outcome carry the risk that an economic slowdown might follow soon thereafter.

Estrella, Arturo, and Frederic S. Mishkin. 1997. “The Predictive Power of the Term Structure of Interest Rates in Europe and the United States: Implications for the European Central Bank.” European Economic Review 41(7), pp. 1,375–1,401.

Rudebusch, Glenn D., and John C. Williams. 2009. “Forecasting Recessions: The Puzzle of the Enduring Power of the Yield Curve.” Journal of Business and Economic Statistics 27(4), pp. 492–503.