A key measure of inflation finally reached the Fed’s 2% target in July after remaining persistently below that for years after the end of the last recession. Analysis shows that most of the increase in personal consumption expenditures price inflation towards the Fed’s target can be attributed to acyclical factors and are not due to a strengthening economy. While risks to the outlook for inflation appear broadly balanced, they include the considerable possibility that inflation has not yet sustainably reached target.

In his July testimony to Congress, Fed Chairman Jerome Powell said, “the 2% [inflation] objective is ‘symmetric’ because the FOMC would be concerned if inflation were running persistently above or below our objective.” This explains the concern when a standard inflation measure—the year-over-year change in the core personal consumption expenditures (PCE) price index—remained below 2% for years after the end of the latest recession. However, core PCE inflation finally reached 2% in July, potentially signaling the end of persistent low inflation and the beginning of a period when inflation will hover sustainably and symmetrically near the FOMC’s target.

The decomposition shows that the recent rise in inflation was mainly attributable to idiosyncratic factors. Despite a strengthening of the economy over the past year, cyclical inflation has remained fairly steady and is currently relatively lower than expected given the very tight labor market. By contrast, the portion of acyclical sectors that do not include health services (non-health acyclical inflation) is currently experiencing relatively high inflation. If non-health acyclical inflation were to revert to more normal historical levels, it would imply some downside risk that future inflation would fall below target again. Overall, the analysis shows the risks to the inflation outlook are balanced between a potential rise or fall. However, a considerable possibility remains that inflation has not yet sustainably reached target.

One way to measure the relationship between economic health and inflation is through the standard Phillips curve framework. This relationship posits that during times of economic prosperity there is increasing pressure on businesses to push prices up, causing inflation to rise. Conversely, during times of economic distress, businesses are less likely to raise prices and inflation is more likely to decline. Changes in prices that move with overall economic conditions can be referred to as cyclical movements in inflation. An extensive literature examines the cyclical nature of inflation by estimating the slope of the Phillips curve (Gali and Gertler 1999 and Shapiro 2008). A “flat” Phillips curve means that changes in overall economic conditions have little impact on inflation, while a “steep” curve means that small changes in economic conditions can have a large impact on inflation.

Businesses also change prices for reasons specific to their particular industry. For example, mainly due to a change in Verizon’s data plan in early 2017, cellular telephone service prices fell 13%, subtracting about 0.2 percentage point from core PCE inflation over the year. Another example is the Budget Control Act of 2011, which introduced a one-time 2% reduction to Medicare payments in April 2013, and was projected to subtract about 0.25 percentage point from core PCE inflation between 2013 and 2016 (Clemens, Gottlieb, and Shapiro 2014).

These types of changes in prices that do not necessarily move with overall economic conditions can be referred to as acyclical fluctuations in inflation.

Businesses’ pricing sensitivity to overall economic conditions and industry-specific factors varies across categories of goods and services. Mahedy and Shapiro (2017) divide the basket of goods used to measure core PCE inflation into those industries where prices tend to be more sensitive to overall economic conditions, termed “procyclical” or cyclical inflation, and those that are more sensitive to industry-specific factors, termed “acyclical” inflation. For each category in the core PCE basket, Mahedy and Shapiro estimate a Phillips curve model that relates changes in prices for that category to the unemployment gap—the gap between the national unemployment rate and its long-term or natural rate—from 1985 to 2007. If the relationship between the unemployment gap and the category’s inflation rate is negative and statistically significant, the category is considered cyclical. If the category does not satisfy that criterion it is considered acyclical. (See Cyclical and Acyclical Core PCE Inflation for details and updated data.)

Figure 1 shows that each category has contributed about half of core PCE price inflation on average over the past 15 years. Cyclical inflation rose steadily coming out of the recession, as would be expected in a Phillips curve framework; however, the series has been flat more recently. That is, cyclical inflation has not risen with the continued strengthening in the economy over the past year. Instead, the recent increase in core PCE inflation can be attributed to the acyclical categories. In other words, acyclical inflation is now contributing about 0.5 percentage point more than it was a year ago. 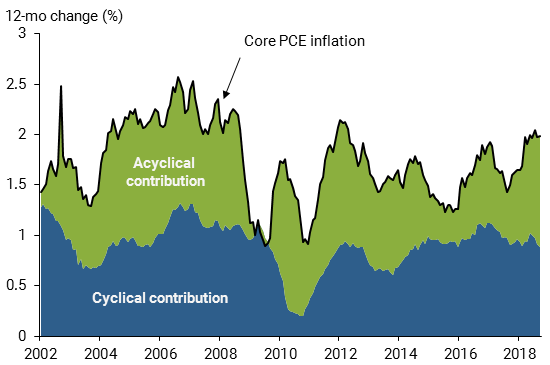 There is no smoking gun reason for this rise in acyclical inflation. Rather, a multitude of acyclical sectors experienced boosts in inflation. A couple of categories had particularly larger effects than others: cellular telephone services, due to the roll-off of the Verizon price cut, and financial service charges and fees. This latter category, which includes charges for deposit accounts, credit card services, and automatic teller machines (ATMs), rose 10% over the past year. Combined, these two categories are responsible for about half of the increase in acyclical inflation over the past year.

Risks to the inflation outlook

The decomposition of core PCE inflation between cyclical and acyclical components sheds light on why inflation climbed to 2%. It also is useful in explaining where inflation may be headed: the decomposition highlights both upside and downside risks to the inflation outlook.

As shown in Figure 1, although cyclical inflation climbed immediately after the recession, it has remained relatively steady over the past few years even though the labor market has continued to tighten. Given the tight labor market, what can be considered a normal level of cyclical inflation? Figure 2 helps answer this question by depicting the relationship between cyclical inflation and the unemployment gap. The fitted trend line from the data shows the clear negative relationship between the two variables, owing to the classification of the underlying categories based on the Phillips curve model. Cyclical inflation is currently lower than would be expected given the current level of the unemployment gap. Specifically, the red points show the monthly values of year-over-year changes in the cyclical contribution to core PCE inflation between January and August of 2018. The fact that they lie below the fitted line implies some upside risk to the inflation outlook. Core PCE inflation would rise 0.1–0.2 percentage point if cyclical inflation were to climb back to its model-implied level—or it could rise even further if the labor market continued to tighten. 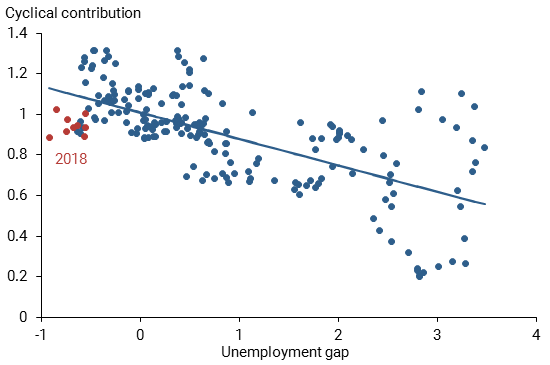 To gauge the outlook for acyclical inflation, it helps to further divide the series between health and non-health acyclical categories. As shown in Clemens, Gottlieb, and Shapiro (2014), health-care services price inflation is highly influenced by public payments and is therefore more persistent and predictable than the other acyclical categories. The black line in Figure 3 shows the difference between the acyclical contribution and its 2002–2007 average. This period serves as a good benchmark because during this time there were no recessions and inflation averaged 2%. The green and yellow bars show how health-care and the other acyclical sectors contributed to this difference. The rise in acyclical inflation stems mainly from the non-health acyclical sectors (yellow bars). These sectors added 0.2 percentage point more to core PCE inflation than they had during the benchmark period, indicating that inflation in these sectors is relatively high. 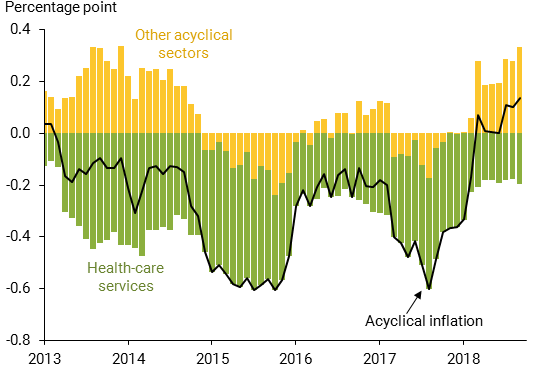 After remaining persistently below 2% for most of the post-recession period, core PCE inflation finally reached 2% in July 2018. This Letter shows that most of this increase towards target can be attributed to acyclical factors and was not due to a strengthening economy.

Risks to the inflation outlook appear broadly balanced. However, there is a considerable possibility that inflation will fall below the FOMC’s 2% target. While cyclical inflation is low compared with the level suggested by standard Phillips curve theories in relation to the very low unemployment rate, inflation rates in non-health acyclical categories are currently high compared with benchmark levels. This implies that the recent upward pressure stemming from acyclical factors could diminish in the future.

Note: Calculations and underlying data used in this Letter are available online in a technical appendix.